Encyclopedia
Cheboygan is a city in the U.S. state
U.S. state
A U.S. state is any one of the 50 federated states of the United States of America that share sovereignty with the federal government. Because of this shared sovereignty, an American is a citizen both of the federal entity and of his or her state of domicile. Four states use the official title of...
of Michigan
Michigan
Michigan is a U.S. state located in the Great Lakes Region of the United States of America. The name Michigan is the French form of the Ojibwa word mishigamaa, meaning "large water" or "large lake"....
. As of the 2000 census
United States Census, 2000
The Twenty-second United States Census, known as Census 2000 and conducted by the Census Bureau, determined the resident population of the United States on April 1, 2000, to be 281,421,906, an increase of 13.2% over the 248,709,873 persons enumerated during the 1990 Census...
, the city population was 5,295. It is the county seat
County seat
A county seat is an administrative center, or seat of government, for a county or civil parish. The term is primarily used in the United States....
of Cheboygan County
Cheboygan County, Michigan
-Commercial Airline:There are no commercial airline airports in Cheboygan County but the nearest ones are Alpena County Regional Airport, Chippewa County International Airport , and Cherry Capital Airport...
.

The city is at the mouth of the Cheboygan River
Cheboygan River
The Cheboygan River is a short but significant river in the Lake Huron drainage basin of the U.S. state of Michigan. in length, the Cheboygan River flows from the north end of Mullett Lake at to the Straits of Mackinac at . The river forms the boundary between Benton Township and Inverness...
on Lake Huron
Lake Huron
Lake Huron is one of the five Great Lakes of North America. Hydrologically, it comprises the larger portion of Lake Michigan-Huron. It is bounded on the east by the Canadian province of Ontario and on the west by the state of Michigan in the United States...
. US 23 connects with I-75
Interstate 75
Interstate 75 is a major north–south Interstate Highway in the Great Lakes and Southeastern regions of the United States. It travels from State Road 826 and State Road 924 in Hialeah, Florida to Sault Ste. Marie, Michigan, at the Ontario, Canada, border...
at Mackinaw City
Mackinaw City, Michigan
Mackinaw City is a village in Emmet and Cheboygan counties in the U.S. state of Michigan. At the 2000 census the population was 859. The name "Mackinaw City" is a bit of a misnomer as it is actually a village...
and the Mackinac Bridge
Mackinac Bridge
The Mackinac Bridge is a suspension bridge spanning the Straits of Mackinac to connect the non-contiguous Upper and Lower peninsulas of the U.S. state of Michigan. Opened in 1957, the bridge is the third longest in total suspension in the world and the longest suspension bridge between anchorages...
, about 15 miles (24.1 km) to the northwest. Rogers City
Rogers City, Michigan
-Commercial airports:The nearest commercial airports are Alpena County Regional Airport an Cherry Capital Airport -US Highway Business Loops:* BUS US 23-Intercounty Highways:* F-21-Demographics:...
is about 41 miles (66 km) to the southeast. M-27
M-27 (Michigan highway)
M-27 is a north–south state trunkline highway in the extreme north of the Lower Peninsula of the US state of Michigan. The route runs between Interstate 75 just north of Indian River and Cheboygan, where it meets US Highway 23 near Lake Huron...
runs south from the city along the north shore of Mullett Lake
Mullett Lake
Mullett Lake is a lake in Cheboygan County in the U.S. state of Michigan. The lake is named after John Mullett, who, together with William A. Burt, made a federal survey of the area from 1840 to 1843. A neighboring lake was named after Burt. Historically, Mullett Lake has been recorded as Mullet...
to I-75 at Indian River
Indian River, Michigan
Indian River is an unincorporated community in Cheboygan County in the U.S. state of Michigan. It is a census-designated place for statistical purposes and is not legally recognized as a municipality. The population was 2,008 at the 2000 census....
about 18 miles (29 km) to the southwest. M-33
M-33 (Michigan highway)
M-33 is a north–south state trunkline highway in the US state of Michigan that runs from Interstate 75 at Alger in Arenac County north to M-27 near Cheboygan. In between, the trunkline runs through rural sections of the northeastern Lower Peninsula including state and national forest areas...
runs due south along the east shore of Lake Mullett to M-68
M-68 (Michigan highway)
M-68 is an east–west state trunkline highway located in the northern part of the Lower Peninsula of the US state of Michigan. The western terminus of the highway begins four miles east of the Little Traverse Bay of Lake Michigan and ends a few blocks from Lake Huron in Rogers City...
about 20 miles (32.2 km) to the south.

Cheboygan was originally a Native American settlement. In 1844, Jacob Sammons, a cooper
Cooper (profession)
Traditionally, a cooper is someone who makes wooden staved vessels of a conical form, of greater length than breadth, bound together with hoops and possessing flat ends or heads...
from Fort Mackinac
Fort Mackinac
Fort Mackinac is a former American military outpost garrisoned from the late 18th century to the late 19th century near Michilimackinac, Michigan, on Mackinac Island...
chose the old native camping ground (then called "Shabwegan") as the site for his cabin. He recruited other settler and a post office named "Duncan" was established in 1846. The name changed to Cheboygan in 1870 and was incorporated as a village in 1871 and as a city in 1889. It was made the county seat in 1853. There was a theater built in town in 1877. 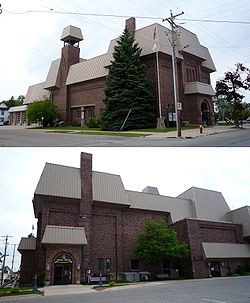 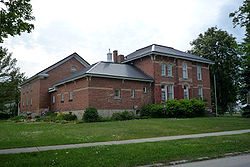 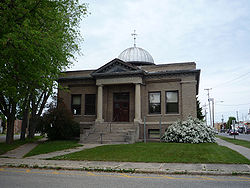 As of the census
Census
A census is the procedure of systematically acquiring and recording information about the members of a given population. It is a regularly occurring and official count of a particular population. The term is used mostly in connection with national population and housing censuses; other common...
of 2000, there were 5,295 people, 2,146 households, and 1,349 families residing in the city. The population density
Population density
Population density is a measurement of population per unit area or unit volume. It is frequently applied to living organisms, and particularly to humans...
was 779.5 per square mile (301.1/km²). There were 2,365 housing units at an average density of 348.2 per square mile (134.5/km²). The racial makeup of the city was 91.80% White, 0.51% African American, 4.12% Native American, 0.26% Asian, 0.02% Pacific Islander, 0.38% from other races
Race (United States Census)
Race and ethnicity in the United States Census, as defined by the Federal Office of Management and Budget and the United States Census Bureau, are self-identification data items in which residents choose the race or races with which they most closely identify, and indicate whether or not they are...
, and 2.91% from two or more races. Hispanic or Latino of any race were 1.44% of the population.

There were 2,146 households out of which 31.8% had children under the age of 18 living with them, 44.4% were married couples
Marriage
Marriage is a social union or legal contract between people that creates kinship. It is an institution in which interpersonal relationships, usually intimate and sexual, are acknowledged in a variety of ways, depending on the culture or subculture in which it is found...
living together, 14.9% had a female householder with no husband present, and 37.1% were non-families. 31.6% of all households were made up of individuals and 14.6% had someone living alone who was 65 years of age or older. The average household size was 2.35 and the average family size was 2.94.

The median income for a household in the city was $25,033, and the median income for a family was $32,692. Males had a median income of $28,417 versus $19,559 for females. The per capita income
Per capita income
Per capita income or income per person is a measure of mean income within an economic aggregate, such as a country or city. It is calculated by taking a measure of all sources of income in the aggregate and dividing it by the total population...
for the city was $14,318. About 15.8% of families and 19.9% of the population were below the poverty line, including 31.0% of those under age 18 and 9.1% of those age 65 or over.

The Babys disbanded in 1981 and he toured with Rod Stewart
Rod Stewart
Roderick David "Rod" Stewart, CBE is a British singer-songwriter and musician, born and raised in North London, England and currently residing in Epping. He is of Scottish and English ancestry....
and Air Supply
Air Supply
Air Supply is an Australian soft rock duo, consisting of Graham Russell as guitarist and singer-songwriter and Russell Hitchcock as lead vocalist. They had a succession of hits worldwide, including eight Top Ten hits in the United States, in the early 1980s...
, as well as Humble Pie Featuring Jerry Shirley, Jimmy Barnes
Jimmy Barnes
James Dixon Swan , better known as Jimmy Barnes, is a Scottish-born Australian rock singer-songwriter. His father Jim Swan was a prizefighter and his older brother John Swan is also a rock singer. It was actually John who had encouraged and taught Jim how to sing as he wasn't really interested at...
and Zoomer
Zoomer
Zoomer may refer to:* Palm Computing and Casio's 1993 Zoomer Personal digital assistant* Slang euphemism for toothless fellatio* Slang for Psilocybin mushrooms* A common misspelling of Zooomr, a Universal Photo Sharing Website launched in 2006...
. He currently resides in Deerfield Beach, Fl.