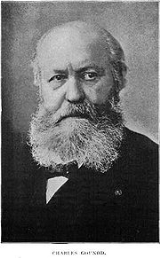 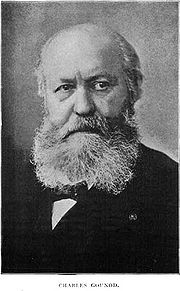 Gounod was born in Paris
Paris
Paris is the capital and largest city in France, situated on the river Seine, in northern France, at the heart of the Île-de-France region...
, the son of a pianist mother and an artist father. His mother was his first piano teacher. Under her tutelage, Gounod first showed his musical talents. He entered the Paris Conservatoire
Conservatoire de Paris
The Conservatoire de Paris is a college of music and dance founded in 1795, now situated in the avenue Jean Jaurès in the 19th arrondissement of Paris, France...
, where he studied under Fromental Halévy
Fromental Halévy
Jacques-François-Fromental-Élie Halévy, usually known as Fromental Halévy , was a French composer. He is known today largely for his opera La Juive.-Early career:...
and Pierre Zimmermann
Pierre-Joseph-Guillaume Zimmermann
Pierre-Joseph-Guillaume Zimmermann, , known as Pierre Zimmerman and Joseph Zimmermann, was a French pianist, composer, and music teacher.Zimmermann was born in Paris, the son of a piano maker...
(he later married Zimmermann's daughter). In 1839, he won the Prix de Rome
Prix de Rome
The Prix de Rome was a scholarship for arts students, principally of painting, sculpture, and architecture. It was created, initially for painters and sculptors, in 1663 in France during the reign of Louis XIV. It was an annual bursary for promising artists having proved their talents by...
for his cantata
Cantata
A cantata is a vocal composition with an instrumental accompaniment, typically in several movements, often involving a choir....
Fernand. He was following his father; François-Louis Gounod (d. 1823) had won the second Prix de Rome in painting in 1783.
While in Italy, Gounod studied the music of Palestrina
Giovanni Pierluigi da Palestrina
Giovanni Pierluigi da Palestrina was an Italian Renaissance composer of sacred music and the best-known 16th-century representative of the Roman School of musical composition...
and other sacred works of the sixteenth century; these he never ceased to cherish. Around 1846-47 he gave serious consideration to joining the priesthood, but he changed his mind before actually taking holy orders, and went back to composition.

In 1854, Gounod completed a Messe Solennelle, also known as the Saint Cecilia Mass. This work was first performed, in its entirety, for the church of Saint Eustache in Paris on Saint Cecilia's Day, November 22, 1855; from this rendition dates Gounod's fame as a noteworthy composer.
During 1855 Gounod wrote two symphonies. His Symphony No. 1 in D major was the inspiration for the Symphony in C
Symphony in C (Bizet)
The Symphony in C is an early work by the French composer Georges Bizet. According to Grove's Dictionary, the symphony "reveals an extraordinarily accomplished talent for an 17-year-old student, in melodic invention, thematic handling and orchestration." Bizet started work on the symphony on 29...
, composed later that year by Georges Bizet
Georges Bizet
Georges Bizet formally Alexandre César Léopold Bizet, was a French composer, mainly of operas. In a career cut short by his early death, he achieved few successes before his final work, Carmen, became one of the most popular and frequently performed works in the entire opera repertory.During a...
, who was then Gounod's 17-year-old student. In the CD era a few recordings of these pieces have emerged: by Michel Plasson
Michel Plasson
Michel Plasson is a French conductor.Plasson was a student of Lazare Lévy at the Conservatoire de Paris. In 1962, he was a prize-winner at the International Besançon Competition for Young Conductors. He studied briefly in the United States, including time with Charles Münch...
conducting the Orchestre national du Capitole de Toulouse
Orchestre national du Capitole de Toulouse
The Orchestre national du Capitole de Toulouse is a French orchestra based in Toulouse. It acts as both a symphony orchestra whose main residence is Toulouse's Halle aux Grains, and the permanent orchestra of the Théâtre du Capitole in Toulouse....
, and by Sir Neville Marriner
Neville Marriner
Sir Neville Marriner is an English conductor and violinist.-Biography:Marriner was born in Lincoln and studied at the Royal College of Music and the Paris Conservatoire. He played the violin in the Philharmonia Orchestra, the Martin String Quartet and London Symphony Orchestra, playing with the...
with the Academy of St. Martin in the Fields
Academy of St. Martin in the Fields
The Academy of St Martin in the Fields is an English chamber orchestra, based in London.Sir Neville Marriner founded the ensemble as The Academy of St.-Martin-in-the-Fields in London as a small, conductorless string group. The ensemble's name comes from Trafalgar Square's St Martin-in-the-Fields...
.
Fanny Mendelssohn
Fanny Mendelssohn
Fanny Cäcilie Mendelssohn , later Fanny Hensel, was a German pianist and composer, the sister of the composer Felix Mendelssohn and granddaughter of the philosopher Moses Mendelssohn...
, sister of Felix Mendelssohn
Felix Mendelssohn
Jakob Ludwig Felix Mendelssohn Barthóldy , use the form 'Mendelssohn' and not 'Mendelssohn Bartholdy'. The Grove Dictionary of Music and Musicians gives ' Felix Mendelssohn' as the entry, with 'Mendelssohn' used in the body text...
, introduced the keyboard music of Johann Sebastian Bach
Johann Sebastian Bach
Johann Sebastian Bach was a German composer, organist, harpsichordist, violist, and violinist whose sacred and secular works for choir, orchestra, and solo instruments drew together the strands of the Baroque period and brought it to its ultimate maturity...
to Gounod, who came to revere Bach. For him, The Well-Tempered Clavier was "the law to pianoforte study...the unquestioned textbook of musical composition". It inspired Gounod to devise an improvisation of a melody over the C major Prelude (BWV 846) from the collection's first book. To this melody, in 1859 (after the deaths of both Mendelssohn siblings), Gounod fitted the words of the Ave Maria
Hail Mary
The Angelic Salutation, Hail Mary, or Ave Maria is a traditional biblical Catholic prayer asking for the intercession of the Virgin Mary, the mother of Jesus. The Hail Mary is used within the Catholic Church, and it forms the basis of the Rosary...
, resulting in a setting that became world-famous. 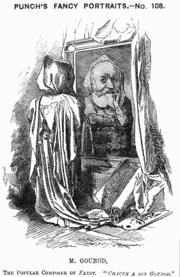 From 1870 to 1874 Gounod lived in England. In 17 Morden Road, Blackheath
Blackheath
Blackheath is the name of a number of places:*Blackheath, London, England**Blackheath, Kent *Blackheath, Surrey, England**Blackheath, Surrey *Blackheath, West Midlands, England*Blackheath, New South Wales, Australia...
. A blue plaque has been put up on the house to show where he lived.
He became the first conductor of what is now the Royal Choral Society
Royal Choral Society
The Royal Choral Society is an amateur choir, based in London. Formed soon after the opening of the Royal Albert Hall in 1871, the choir gave its first performance as the Royal Albert Hall Choral Society on 8 May 1872 – the choir's first conductor Charles Gounod included the Hallelujah Chorus from...
. Much of his music from this time is vocal. He became entangled with the amateur English singer Georgina Weldon
Georgina Weldon
Georgina Weldon was a British campaigner against the lunacy laws, a celebrated litigant and noted amateur soprano of the Victorian era.-Early years:...
, a relationship (platonic, it seems) which ended in great acrimony and embittered litigation. Gounod had lodged with Weldon and her husband in London's Tavistock House
Tavistock House
Tavistock House was the London home of the noted British author Charles Dickens and his family from 1851 to 1860. At Tavistock House Dickens wrote Bleak House, Hard Times, Little Dorrit and A Tale of Two Cities. He also put on amateur theatricals there which are described in John Forster's Life of...
.

Later in his life, Gounod returned to his early religious impulses, writing much sacred music. His Pontifical Anthem (Marche Pontificale, 1869) eventually (1949) became the official national anthem
National anthem
A national anthem is a generally patriotic musical composition that evokes and eulogizes the history, traditions and struggles of its people, recognized either by a nation's government as the official national song, or by convention through use by the people.- History :Anthems rose to prominence...
of Vatican City
Vatican City
Vatican City , or Vatican City State, in Italian officially Stato della Città del Vaticano , which translates literally as State of the City of the Vatican, is a landlocked sovereign city-state whose territory consists of a walled enclave within the city of Rome, Italy. It has an area of...
. He expressed a desire to compose his Messe à la mémoire de Jeanne d'Arc (1887) while kneeling on the stone on which Joan of Arc
Joan of Arc
Saint Joan of Arc, nicknamed "The Maid of Orléans" , is a national heroine of France and a Roman Catholic saint. A peasant girl born in eastern France who claimed divine guidance, she led the French army to several important victories during the Hundred Years' War, which paved the way for the...
knelt at the coronation of Charles VII of France
Charles VII of France
Charles VII , called the Victorious or the Well-Served , was King of France from 1422 to his death, though he was initially opposed by Henry VI of England, whose Regent, the Duke of Bedford, ruled much of France including the capital, Paris...
. A devout Catholic, he had on his piano a music-rack in which was carved an image of the face of Jesus.

He was made a Grand Officer of the Légion d'honneur
Légion d'honneur
The Legion of Honour, or in full the National Order of the Legion of Honour is a French order established by Napoleon Bonaparte, First Consul of the Consulat which succeeded to the First Republic, on 19 May 1802...
in July 1888. In 1893, shortly after he had put the finishing touches to a requiem
Requiem
A Requiem or Requiem Mass, also known as Mass for the dead or Mass of the dead , is a Mass celebrated for the repose of the soul or souls of one or more deceased persons, using a particular form of the Roman Missal...
written for his grandson, he died of a stroke in Saint-Cloud
Saint-Cloud
Saint-Cloud is a commune in the western suburbs of Paris, France. It is located from the centre of Paris.Like other communes of the Hauts-de-Seine such as Marnes-la-Coquette, Neuilly-sur-Seine or Vaucresson, Saint-Cloud is one of the wealthiest cities in France, ranked 22nd out of the 36500 in...
, France.