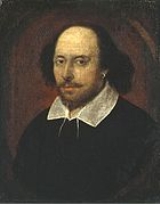 Overview
Romeo and Juliet is a tragedy
Shakespearean tragedy
Shakespeare wrote tragedies from the beginning of his career. One of his earliest plays was the Roman tragedy Titus Andronicus, which he followed a few years later with Romeo and Juliet. However, his most admired tragedies were written in a seven-year period between 1601 and 1608...
written early in the career of playwright William Shakespeare
William Shakespeare
William Shakespeare was an English poet and playwright, widely regarded as the greatest writer in the English language and the world's pre-eminent dramatist. He is often called England's national poet and the "Bard of Avon"...
about two young star-crossed
Star-crossed
"Star-crossed" or "star-crossed lovers" is a phrase describing a pair of lovers whose relationship is often thwarted by outside forces. The term encompasses other meanings, but originally means the pairing is being "thwarted by a malign star" or that the stars are working against the relationship...
lovers whose deaths ultimately unite their feuding families. It was among Shakespeare's most popular archetypal
Archetype
An archetype is a universally understood symbol or term or pattern of behavior, a prototype upon which others are copied, patterned, or emulated...
stories of young, teenage lovers.

Romeo and Juliet belongs to a tradition of tragic romances stretching back to antiquity. Its plot is based on an Italian tale, translated into verse as The Tragical History of Romeus and Juliet
The Tragical History of Romeus and Juliet
The Tragicall Historye of Romeus and Juliet is a narrative poem, first published in 1562 by Arthur Brooke, who is reported to have translated it from an Italian novella by Matteo Bandello...
by Arthur Brooke in 1562 and retold in prose in Palace of Pleasure by William Painter
William Painter
William Painter was an English author and translator.William Painter was a native of Kent. He matriculated at St John's College, Cambridge, in 1554. In 1561 he became clerk of the ordnance in the Tower of London, a position in which he appears to have amassed a fortune out of the public funds...
in 1582.

Was romeo really in love with rosaline or it was an infatuation?what is the difference?if you had a friend who was in same position as romeo what advi...

How did Romeo nad Juliet affect the city of Verona?

What poetic forms does Shakespeare use in this play, and to what effect?

How does Shakespeare use the imagery of light and dark in Romeo and Juliet?

How do feminists interpret Romeo and Juliet?

How does the era affect the situation between romeo and juliet?

Upon what sources did Shakespeare draw to write Romeo and Juliet?

What are some of the themes of Romeo and Juliet?
More

Romeo: Is love a tender thing? it is too rough, Too rude, too boisterous, and it pricks like thorn.Mercutio: If love be rough with you, be rough with love;Prick love for pricking, and you beat love down.

O, then, I see Queen Mab hath been with you.She is the fairies’ midwife, and she comesIn shape no bigger than an agate-stoneOn the fore-finger of an alderman,Drawn with a team of little atomiesAthwart men’s noses as they lie asleep.