Encyclopedia
Chamorro is a Malayo-Polynesian (Austronesian) language, spoken on the Mariana Islands
Mariana Islands
The Mariana Islands are an arc-shaped archipelago made up by the summits of 15 volcanic mountains in the north-western Pacific Ocean between the 12th and 21st parallels north and along the 145th meridian east...
(Guam
Guam
Guam is an organized, unincorporated territory of the United States located in the western Pacific Ocean. It is one of five U.S. territories with an established civilian government. Guam is listed as one of 16 Non-Self-Governing Territories by the Special Committee on Decolonization of the United...
, Rota
Rota (island)
Rota also known as the "peaceful island", is the southernmost island of the United States Commonwealth of the Northern Mariana Islands and the second southernmost of the Marianas Archipelago. It lies approximately 40 miles north-northeast of the United States territory of Guam...
, Tinian
Tinian
Tinian is one of the three principal islands of the Commonwealth of the Northern Mariana Islands.-Geography:Tinian is about 5 miles southwest of its sister island, Saipan, from which it is separated by the Saipan Channel. It has a land area of 39 sq.mi....
, and Saipan
Saipan
Saipan is the largest island of the United States Commonwealth of the Northern Mariana Islands , a chain of 15 tropical islands belonging to the Marianas archipelago in the western Pacific Ocean with a total area of . The 2000 census population was 62,392...
) by about 47,000 people (about 35,000 people on Guam and about 12,000 in the N. Marianas).

The numbers of Chamorro speakers have declined in recent years, and the younger generations are less likely to know the language. The influence of English has caused the language to become endangered. On Guam (called "Guåhan" by Chamorro speakers, from the word guaha, meaning "have", but its English meaning is, "We Have", from the idea that they had everything they needed,) the number of native Chamorro speakers has dwindled in the last decade or so, while in the Northern Mariana Islands, young Chamorros still speak the language fluently. Various representatives from Guam have unsuccessfully lobbied the United States to take action to promote and protect the language.

It is still common among Chamorro households in the Northern Marianas, but fluency has greatly decreased among Guamanian Chamorros during the years of American rule in favor of American English
English language
English is a West Germanic language that arose in the Anglo-Saxon kingdoms of England and spread into what was to become south-east Scotland under the influence of the Anglian medieval kingdom of Northumbria...
, which is commonplace throughout the inhabited Marianas.

Chamorro also has much Spanish
Spanish language
Spanish , also known as Castilian , is a Romance language in the Ibero-Romance group that evolved from several languages and dialects in central-northern Iberia around the 9th century and gradually spread with the expansion of the Kingdom of Castile into central and southern Iberia during the...
influence, due to three centuries of Spanish colonial rule. Many Chamorro nouns, adjectives, prepositions, numerals, and verbs are of Spanish origin. Under a historical point of view, it may be considered a mixed language, even if it is now independent and unique. When Guam was colonised by the United States, Chamorro was at the pre-stage of being transformed into a Spanish-based creole, and the transfer of rule made it so that it never reached that point.

Note that the letter Y is pronounced more like 'dz' (an approximation of the regional Spanish
Spanish language
Spanish , also known as Castilian , is a Romance language in the Ibero-Romance group that evolved from several languages and dialects in central-northern Iberia around the 9th century and gradually spread with the expansion of the Kingdom of Castile into central and southern Iberia during the...
pronunciation of "Y"/"LL" as [dʒ]); nor are N and Ñ always distinguished. Thus the Guamanian place name spelled Yona
Yona, Guam
- History :The village was historically a farming community but today is mostly residential. During World War II, the Japanese forced the indigenous Chamorros to march from camps in northern Guam to prison camps in the Manenggon area in Yona shortly before the Americans liberated the island...
is pronounced 'dzo-nia' [dzo.ɲa], not 'yo-na' [jo.na] as might be expected. Note also that Ch is usually pronounced like 'ts' rather than 'tsh' and that A and Å are not always distinguished in written Chamorro (often being written simply as 'A'). R in Chamorro is pronounced like [ɾ] like Spanish in between vowels; and as a retroflex approximant at the beginning of words [ɻ].

Chamorro has geminate consonants which are written double (GG, DD, KK, MM, NGNG, PP, SS, TT), native diphthong
Diphthong
A diphthong , also known as a gliding vowel, refers to two adjacent vowel sounds occurring within the same syllable. Technically, a diphthong is a vowel with two different targets: That is, the tongue moves during the pronunciation of the vowel...
s AI and AO, plus OI, OE, IA, IU, IE in loanwords; penultimate stress, except where marked otherwise with an acute accent
Acute accent
The acute accent is a diacritic used in many modern written languages with alphabets based on the Latin, Cyrillic, and Greek scripts.-Apex:An early precursor of the acute accent was the apex, used in Latin inscriptions to mark long vowels.-Greek:...
, as in asút "blue" or dángkulo "big". Unstressed vowels are limited to /ə i u/, though they are often spelled A E O. Syllables may be consonant-vowel-consonant, as in che’lu "sibling", diskatga "unload", mamahlao "shy", or oppop "lie face down", gatus (old word for 100), Hagåtña (Capital of Guam); B, D, and G are not distinguished from P, T, and K in that position.

Chamorro is an agglutinative language
Agglutinative language
An agglutinative language is a language that uses agglutination extensively: most words are formed by joining morphemes together. This term was introduced by Wilhelm von Humboldt in 1836 to classify languages from a morphological point of view...
, grammatically allowing root words to be modified by a number of affixes. For example, masanganenñaihon "talked awhile (with/to)", passive marking prefix ma-, root verb sangan, referential suffix i "to" (forced morphophonemically to change to e) with excrescent consonant n, and suffix ñaihon "a short amount of time". Thus Masanganenñaihon gue' "He/she was told (something) for a while".

Chamorro has many Spanish
Spanish language
Spanish , also known as Castilian , is a Romance language in the Ibero-Romance group that evolved from several languages and dialects in central-northern Iberia around the 9th century and gradually spread with the expansion of the Kingdom of Castile into central and southern Iberia during the...
loanword
Loanword
A loanword is a word borrowed from a donor language and incorporated into a recipient language. By contrast, a calque or loan translation is a related concept where the meaning or idiom is borrowed rather than the lexical item itself. The word loanword is itself a calque of the German Lehnwort,...
s and other words have Spanish etymological roots (e.g. tenda "shop/store" from Spanish tienda), which may lead some to mistakenly conclude that the language is a Spanish Creole
Spanish-based Creole languages
-Chavacano:Chavacano is a Spanish-based Creole language and the name of the Six Dialects of Spanish evolved words turned into a Creole language spoken in the Philippines...
: Chamorro very much uses its loan words in a Micronesian way (e.g.: bumobola "playing ball
Ball
A ball is a round, usually spherical but sometimes ovoid, object with various uses. It is used in ball games, where the play of the game follows the state of the ball as it is hit, kicked or thrown by players. Balls can also be used for simpler activities, such as catch, marbles and juggling...
" from bola "ball, play ball" with verbalizing infix
Infix
An infix is an affix inserted inside a word stem . It contrasts with adfix, a rare term for an affix attached to the end of a stem, such as a prefix or suffix.-Indonesian:...
-um- and reduplication
Reduplication
Reduplication in linguistics is a morphological process in which the root or stem of a word is repeated exactly or with a slight change....
of first syllable of root).

Chamorro is predicate
Predicate (grammar)
There are two competing notions of the predicate in theories of grammar. Traditional grammar tends to view a predicate as one of two main parts of a sentence, the other being the subject, which the predicate modifies. The other understanding of predicates is inspired from work in predicate calculus...
-initial, head-marking language. It has a rich agreement system both in the nominal and in the verbal domains. The following table gives the possessor-noun agreement suffixes:


Chamorro is also known for its wh-agreement in the verb: these agreement morphemes agree with features (roughly, the Grammatical case
Grammatical case
In grammar, the case of a noun or pronoun is an inflectional form that indicates its grammatical function in a phrase, clause, or sentence. For example, a pronoun may play the role of subject , of direct object , or of possessor...
feature) of the question phrase, and replace the regular subject–verb agreement:

'Who washed the car?'

Researches in several countries are also studying different aspects of Chamorro. In 2009, the Chamorro Linguistics International Network (CHIN) http://www.fb10.uni-bremen.de/chin/ was established in Bremen, Germany. CHiN was founded on occasion of the Chamorro Day (27 September 2009) which was part of the programme of the Festival of Languages http://www.festival.uni-bremen.de. The foundation ceremony was attended by people from Germany, Guam, the Netherlands, New Zealand, Spain, Switzerland, and the United States of America. 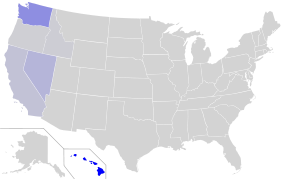