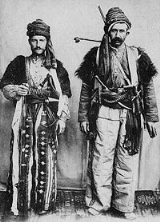 Encyclopedia
Chaldean Christians icon are ethnic Assyrian adherents of the Chaldean Catholic Church
Chaldean Catholic Church
The Chaldean Catholic Church , is an Eastern Syriac particular church of the Catholic Church, maintaining full communion with the Bishop of Rome and the rest of the Catholic Church...
, most of whom entered communion with the Catholic Church
Catholicism
Catholicism is a broad term for the body of the Catholic faith, its theologies and doctrines, its liturgical, ethical, spiritual, and behavioral characteristics, as well as a religious people as a whole....
from the Church of the East
Church of the East
The Church of the East tāʾ d-Maḏnḥāʾ), also known as the Nestorian Church, is a Christian church, part of the Syriac tradition of Eastern Christianity. Originally the church of the Persian Sassanid Empire, it quickly spread widely through Asia...
, which was already Catholic, but most wanted to stray away from the Catholic Church, causing the split in the 17th and 18th centuries. In addition to their homeland, migrant Chaldean Catholic communities are found in the United States
United States
The United States of America is a federal constitutional republic comprising fifty states and a federal district...
, Sweden
Sweden
Sweden , officially the Kingdom of Sweden , is a Nordic country on the Scandinavian Peninsula in Northern Europe. Sweden borders with Norway and Finland and is connected to Denmark by a bridge-tunnel across the Öresund....
, Germany
Germany
Germany , officially the Federal Republic of Germany , is a federal parliamentary republic in Europe. The country consists of 16 states while the capital and largest city is Berlin. Germany covers an area of 357,021 km2 and has a largely temperate seasonal climate...
, France
France
The French Republic , The French Republic , The French Republic , (commonly known as France , is a unitary semi-presidential republic in Western Europe with several overseas territories and islands located on other continents and in the Indian, Pacific, and Atlantic oceans. Metropolitan France...
, Canada
Canada
Canada is a North American country consisting of ten provinces and three territories. Located in the northern part of the continent, it extends from the Atlantic Ocean in the east to the Pacific Ocean in the west, and northward into the Arctic Ocean...
and Australia
Australia
Australia , officially the Commonwealth of Australia, is a country in the Southern Hemisphere comprising the mainland of the Australian continent, the island of Tasmania, and numerous smaller islands in the Indian and Pacific Oceans. It is the world's sixth-largest country by total area...
.

Geographically, the Chaldeans originate from central and southern Assyria
Assyria
Assyria was a Semitic Akkadian kingdom, extant as a nation state from the mid–23rd century BC to 608 BC centred on the Upper Tigris river, in northern Mesopotamia , that came to rule regional empires a number of times through history. It was named for its original capital, the ancient city of Assur...
, the Nineveh plains
Nineveh plains
Nineveh plains is a region in the Ninawa Governorate of Iraq to the north and west of the city Mosul. The area generally consists of three districts; Tel Keppe, Al-Hamdaniya, and Al-Shikhan...
, where the ruins of the ancient Assyrian capitals of Nineveh
Nineveh
Nineveh was an ancient Assyrian city on the eastern bank of the Tigris River, and capital of the Neo Assyrian Empire. Its ruins are across the river from the modern-day major city of Mosul, in the Ninawa Governorate of Iraq....
and Nimrud
Nimrud
Nimrud is an ancient Assyrian city located south of Nineveh on the river Tigris in modern Ninawa Governorate Iraq. In ancient times the city was called Kalḫu. The Arabs called the city Nimrud after the Biblical Nimrod, a legendary hunting hero .The city covered an area of around . Ruins of the city...
are located.


Chaldean Catholics in Jordan and Turkey

The 1896 Statistics of the Chaldean Catholics counted 233 parishes and 177 churches or chapels. The Chaldean Catholic clergy numbered 248 priests; they were assisted by the religious of the Congregation of St. Hormizd (Rabban-Hormizd
Rabban Hormizd (Saint)
Saint Rabban Hormizd, or Rabban Hormizd the Persian, was a monk of the Nestorian tradition who lived in the seventh century Iraq...
) who numbered about one hundred. There were about 52 Chaldean schools (not counting those conducted by Latin nuns and missionaries). At Mosul
Mosul
Mosul , is a city in northern Iraq and the capital of the Ninawa Governorate, some northwest of Baghdad. The original city stands on the west bank of the Tigris River, opposite the ancient Assyrian city of Nineveh on the east bank, but the metropolitan area has now grown to encompass substantial...
there was a patriarchal seminary, distinct from the Chaldean seminary directed by the Dominicans. The total number of the Chaldean Christians is nearly 1.4 million, 78,000 of whom are in the Diocese of Mosul
Chaldean Catholic Archeparchy of Mosul
The Chaldean Catholic Archeparchy of Mosul is an Eastern sui juris particular church of the Catholic Church, located in the northern Iraqi city of Mosul. Its followers are ethnic Assyrians and speakers of Aramaic. The diocese comprises the city of Mosul. The territory is subdivided in 12 parishes...
.

The patriarch considers Baghdad
Baghdad
Baghdad is the capital of Iraq, as well as the coterminous Baghdad Governorate. The population of Baghdad in 2011 is approximately 7,216,040...
as the principal city of his see. His title of "Patriarch of Babylon" results from the identification of Baghdad with ancient Babylon
Babylon
Babylon was an Akkadian city-state of ancient Mesopotamia, the remains of which are found in present-day Al Hillah, Babil Province, Iraq, about 85 kilometers south of Baghdad...
(Baghdad is 55 miles north of the ancient city of Babylon and corresponds to northern Babylonia
Babylonia
Babylonia was an ancient cultural region in central-southern Mesopotamia , with Babylon as its capital. Babylonia emerged as a major power when Hammurabi Babylonia was an ancient cultural region in central-southern Mesopotamia (present-day Iraq), with Babylon as its capital. Babylonia emerged as...
). However, the Chaldean patriarch resides habitually at Mosul
Mosul
Mosul , is a city in northern Iraq and the capital of the Ninawa Governorate, some northwest of Baghdad. The original city stands on the west bank of the Tigris River, opposite the ancient Assyrian city of Nineveh on the east bank, but the metropolitan area has now grown to encompass substantial...
and reserves for himself the direct administration of this diocese and that of Baghdad. There are five archbishops (resident respectively at Basra
Basra
Basra is the capital of Basra Governorate, in southern Iraq near Kuwait and Iran. It had an estimated population of two million as of 2009...
, Diyarbakır
Diyarbakır
Diyarbakır is one of the largest cities in southeastern Turkey...
, Kirkuk
Kirkuk
Kirkuk is a city in Iraq and the capital of Kirkuk Governorate.It is located in the Iraqi governorate of Kirkuk, north of the capital, Baghdad...
, Salmas
Salmas
Salmas is a city in and the capital of Salmas County, West Azerbaijan Province, Iran. At the 2006 census, its population was 79,560, in 19,806 families....
and Urmia
Urmia
- Demographics :According to official census of 2006, the population of Urmia is about 871,204.- Language :The population of Urmia is mainly Azerbaijani people, with Kurdish, Assyrian Christian, and Armenian minorities...
) and seven bishops. Eight patriarchal vicars govern the small Chaldean communities dispersed throughout Turkey and Persia. The Chaldean clergy, especially the monks of Rabban-Hormizd
Rabban Hormizd Monastery
Rabban Hormizd Monastery is an important monastery of the Chaldean Church. It is carved out in the mountains about 2 miles from Alqosh, Iraq, 28 miles north of Mosul...
, have established some missionary stations in the mountain districts inhabited by Nestorians. Three dioceses are in Persia, the others in Turkey.

The liturgical language of the Chaldean Catholic Church is Syriac
Syriac language
Syriac is a dialect of Middle Aramaic that was once spoken across much of the Fertile Crescent. Having first appeared as a script in the 1st century AD after being spoken as an unwritten language for five centuries, Classical Syriac became a major literary language throughout the Middle East from...
a Neo-Aramaic
Neo-Aramaic languages
Neo-Aramaic, or Modern Aramaic, languages are varieties of Aramaic that are spoken vernaculars in the medieval to modern era, evolving out of Middle Aramaic dialects around AD 1200 ....
dialect. The liturgy of the Chaldean Church is written in Syriac alphabet
Syriac alphabet
The Syriac alphabet is a writing system primarily used to write the Syriac language from around the 2nd century BC . It is one of the Semitic abjads directly descending from the Aramaic alphabet and shares similarities with the Phoenician, Hebrew, Arabic, and the traditional Mongolian alphabets.-...
.

The literary revival in the early 20th century was mostly due to the Lazarist, Pere Bedjan
Paul Bedjan
Paul Bedjan was a priest of the Chaldean Catholic Church and a Syriacist and orientalist.Born in Khosrova, Persia, the son of a Chaldean Catholic family, Bedjan was enrolled a pupil at the French Lazarist School in Khosrova in 1846. On 27 October 1856, at the age of eighteen, he became a Lazarist...
, a Persian Chaldean Catholic, who devoted much industry and learning to popularizing among his people, including Catholics, Orthodox Christians and the Assyrian Church, their ancient chronicles, the lives of Assyrian
Assyria
Assyria was a Semitic Akkadian kingdom, extant as a nation state from the mid–23rd century BC to 608 BC centred on the Upper Tigris river, in northern Mesopotamia , that came to rule regional empires a number of times through history. It was named for its original capital, the ancient city of Assur...
saints and martyrs, even works of the ancient Assyrian doctors.

In mid-March 2008, Chaldean Catholic Archbishop Paulos Faraj Rahho
Paulos Faraj Rahho
Archbishop Mar Paulos Faraj Rahho was the Chaldean Catholic Archeparch of Mosul, in the northern part of Iraq.Also known as Paul Faraj Rahho and Paulos Faradsch Raho he was born into an ethnic Assyrian family, he lived almost his entire life in Mosul, Iraq, which has a long established community...
of Mosul
Mosul
Mosul , is a city in northern Iraq and the capital of the Ninawa Governorate, some northwest of Baghdad. The original city stands on the west bank of the Tigris River, opposite the ancient Assyrian city of Nineveh on the east bank, but the metropolitan area has now grown to encompass substantial...
was found dead, having been kidnapped two weeks earlier. Pope Benedict XVI
Pope Benedict XVI
Benedict XVI is the 265th and current Pope, by virtue of his office of Bishop of Rome, the Sovereign of the Vatican City State and the leader of the Catholic Church as well as the other 22 sui iuris Eastern Catholic Churches in full communion with the Holy See...
condemned his death, calling it an act of inhuman violence. Sunni and Shia Muslims also expressed their condemnation. 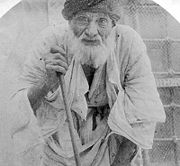