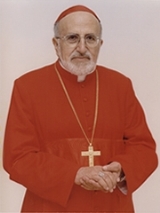 Encyclopedia
Mar Emmanuel III Delly is the Patriarch of Babylon of the Chaldeans and Primate
Primate (religion)
Primate is a title or rank bestowed on some bishops in certain Christian churches. Depending on the particular tradition, it can denote either jurisdictional authority or ceremonial precedence ....
of the Chaldean Catholic Church
Chaldean Catholic Church
The Chaldean Catholic Church , is an Eastern Syriac particular church of the Catholic Church, maintaining full communion with the Bishop of Rome and the rest of the Catholic Church...
, an Eastern Catholic sui juris Particular church
Particular Church
In Catholic canon law, a Particular Church is an ecclesial community headed by a bishop or someone recognised as the equivalent of a bishop.There are two kinds of particular Churches:# Local particular Churches ...
of the Catholic Church and a Cardinal
Cardinal (Catholicism)
A cardinal is a senior ecclesiastical official, usually an ordained bishop, and ecclesiastical prince of the Catholic Church. They are collectively known as the College of Cardinals, which as a body elects a new pope. The duties of the cardinals include attending the meetings of the College and...
. He was born on October 6, 1927 in Tel Keppe
Tel Keppe
Tel Keppe , is one of the largest formerly Assyrian towns in Iraq. It is located in the Ninawa Governorate, less than 8 miles North East of Mosul in northern Iraq.-Etymology:...
and was ordained a priest on December 21, 1952. He was ordained a bishop
Bishop
A bishop is an ordained or consecrated member of the Christian clergy who is generally entrusted with a position of authority and oversight. Within the Catholic Church, Eastern Orthodox, Oriental Orthodox Churches, in the Assyrian Church of the East, in the Independent Catholic Churches, and in the...
ten years later in December 1962 at the age of 35. He was elected Patriarch of the Chaldean Church on December 3, 2003, succeeding the late Patriarch Raphael I Bidawid
Raphael I Bidawid
Mar Raphael I Bidawid † was the patriarch of the Chaldean Catholic Church from 1989-2003. He was also a Syriac scholar.-Life:He was born on April 17, 1922 in northern Iraqi city of Mosul into an ethnic Assyrian family, and took his school and seminar training in Mosul...
. He was created a Cardinal Bishop on November 24, 2007.

His patriarchate
Patriarchy
Patriarchy is a social system in which the role of the male as the primary authority figure is central to social organization, and where fathers hold authority over women, children, and property. It implies the institutions of male rule and privilege, and entails female subordination...
in Iraq
Iraq
Iraq ; officially the Republic of Iraq is a country in Western Asia spanning most of the northwestern end of the Zagros mountain range, the eastern part of the Syrian Desert and the northern part of the Arabian Desert....
came at a fairly difficult time period. Before he became Patriarch
Patriarch
Originally a patriarch was a man who exercised autocratic authority as a pater familias over an extended family. The system of such rule of families by senior males is called patriarchy. This is a Greek word, a compound of πατριά , "lineage, descent", esp...
he had been accidentally injured by shattered glass in an attack. Hence he has been strongly concerned about the security situation there. Although optimistic about the Iraqi elections
2005 Iraqi elections
There were two national legislative elections in Iraq in 2005:*Iraqi legislative election, January 2005 for an assembly to draft a Constitution and*Iraqi legislative election, December 2005 for the first assembly under the new constitution....
he has expressed criticisms about upsurges in violences against Christian
Christian
A Christian is a person who adheres to Christianity, an Abrahamic, monotheistic religion based on the life and teachings of Jesus of Nazareth as recorded in the Canonical gospels and the letters of the New Testament...
s. He has taken efforts to improve the population's morale, maintain friendly relations with Islam
Islam
Islam . The most common are and .   : Arabic pronunciation varies regionally. The first vowel ranges from ~~. The second vowel ranges from ~~~...
ic leaders, improve safety, and work for the release of kidnapping victims.

Since his election as Patriarch in December 2003, Mar Emmanuel III Delly has continued to work for the Chaldean Church. In Iraq, the Chaldean Church, which is the largest Christian group, consists of eight dioceses totaling 100 parishes and approximately 600,000 people. Additionally, there are another eight dioceses outside of Iraq, in countries including Iran, Turkey, Syria, Lebanon, Egypt, Europe, Australia, Canada and the U.S. It is estimated that the Chaldean population is over one and a half million devotees world wide.

Mar Emmanuel III Delly is well known for his respect and cooperation with leaders of other churches and faiths, mainly Muslims. Mar Emmanuel III Delly acts as a spiritual father, not only to the whole Chaldean Church, now scattered all over the world, but to all Christians in Iraq, especially in these times of great hardships.

During his 42 years as a bishop, Mar Emmanuel III Delly's contributions to the Chaldean Church include building of many churches in and outside of Iraq. This includes the establishment of the College of Babylon, as a philosophy and theology institution. Also, he spiritually supervises the Chaldean monasteries and convents. Mar Emmanuel III Delly oversees several Chaldean religious journals and publications. He is well known for his administrative abilities and love of his people.

On October 17, 2007, Pope Benedict XVI
Pope Benedict XVI
Benedict XVI is the 265th and current Pope, by virtue of his office of Bishop of Rome, the Sovereign of the Vatican City State and the leader of the Catholic Church as well as the other 22 sui iuris Eastern Catholic Churches in full communion with the Holy See...
announced that he would make Mar Emmanuel III Delly a Cardinal
Cardinal (Catholicism)
A cardinal is a senior ecclesiastical official, usually an ordained bishop, and ecclesiastical prince of the Catholic Church. They are collectively known as the College of Cardinals, which as a body elects a new pope. The duties of the cardinals include attending the meetings of the College and...
. Delly was elevated to the College of Cardinals
College of Cardinals
The College of Cardinals is the body of all cardinals of the Catholic Church.A function of the college is to advise the pope about church matters when he summons them to an ordinary consistory. It also convenes on the death or abdication of a pope as a papal conclave to elect a successor...
in the consistory
Consistory
-Antiquity:Originally, the Latin word consistorium meant simply 'sitting together', just as the Greek synedrion ....
at St. Peter's Basilica
St. Peter's Basilica
The Papal Basilica of Saint Peter , officially known in Italian as ' and commonly known as Saint Peter's Basilica, is a Late Renaissance church located within the Vatican City. Saint Peter's Basilica has the largest interior of any Christian church in the world...
on November 24, 2007. Pope Benedict XVI said on this occasion that by naming Emmanuel III Delly cardinal, he was demonstrating his "spiritual closeness and [his] affection" for Iraqi Christians.

Mar Emmanuel III Delly speaks Chaldean Neo-Aramaic
Chaldean Neo-Aramaic
Chaldean Neo-Aramaic is a Northeastern Neo-Aramaic dialect. Chaldean Neo-Aramaic is spoken on the plain of Mosul in northern Iraq, as well as by the Chaldean communities worldwide. Most speakers are Chaldean Catholics....
, Syriac
Syriac language
Syriac is a dialect of Middle Aramaic that was once spoken across much of the Fertile Crescent. Having first appeared as a script in the 1st century AD after being spoken as an unwritten language for five centuries, Classical Syriac became a major literary language throughout the Middle East from...
, Arabic
Arabic language
Arabic is a name applied to the descendants of the Classical Arabic language of the 6th century AD, used most prominently in the Quran, the Islamic Holy Book...
, French
French language
French is a Romance language spoken as a first language in France, the Romandy region in Switzerland, Wallonia and Brussels in Belgium, Monaco, the regions of Quebec and Acadia in Canada, and by various communities elsewhere. Second-language speakers of French are distributed throughout many parts...
, Italian
Italian language
Italian is a Romance language spoken mainly in Europe: Italy, Switzerland, San Marino, Vatican City, by minorities in Malta, Monaco, Croatia, Slovenia, France, Libya, Eritrea, and Somalia, and by immigrant communities in the Americas and Australia...
, Latin, and English
English language
English is a West Germanic language that arose in the Anglo-Saxon kingdoms of England and spread into what was to become south-east Scotland under the influence of the Anglian medieval kingdom of Northumbria...
fluently.