Encyclopedia
České Budějovice (ˈtʃɛskɛː ˈbuɟɛjovɪtsɛ; colloquially: Budějice or Budějce; Ukrainian: Чеські Будейовиці, or Böhmisch Budweis; ; often referred to simply as Budweis in English) is a city in the Czech Republic
Czech Republic
The Czech Republic is a landlocked country in Central Europe. The country is bordered by Poland to the northeast, Slovakia to the east, Austria to the south, and Germany to the west and northwest....
. It is the largest city in the South Bohemian Region
South Bohemian Region
South Bohemian Region is an administrative unit of the Czech Republic, located mostly in the southern part of its historical land of Bohemia, with a small part in southwestern Moravia...
and is the political and commercial capital of the region and centre of the Roman Catholic Diocese of České Budějovice and of the University of South Bohemia and the Academy of Sciences. The town is not to be confused with Moravské Budějovice in Moravia
Moravia
Moravia is a historical region in Central Europe in the east of the Czech Republic, and one of the former Czech lands, together with Bohemia and Silesia. It takes its name from the Morava River which rises in the northwest of the region...
.

The city was founded by Hirzo, a knight of King Ottokar II of Bohemia
Ottokar II of Bohemia
Ottokar II , called The Iron and Golden King, was the King of Bohemia from 1253 until 1278. He was the Duke of Austria , Styria , Carinthia and Carniola also....
, and was granted its municipal charter
Municipal corporation
A municipal corporation is the legal term for a local governing body, including cities, counties, towns, townships, charter townships, villages, and boroughs. Municipal incorporation occurs when such municipalities become self-governing entities under the laws of the state or province in which...
in 1265. The royal city was created as a platform of the king's power in South Bohemia and to counterbalance the powerful aristocratic House of Rosenberg
House of Rosenberg
The Rosenberg family was the most significant and influential Bohemian noble family playing important role in Czech medieval history from 13th century till 1611...
, which died out in 1611. The city was traditionally a bulwark of the Catholics in the long-lasting religious conflicts in Bohemia.

The city was a German-speaking enclave
Enclave and exclave
In political geography, an enclave is a territory whose geographical boundaries lie entirely within the boundaries of another territory.An exclave, on the other hand, is a territory legally or politically attached to another territory with which it is not physically contiguous.These are two...
from the 17th century until 1880. During the industrialization of the city, Czechs again became the ethnic majority. Until the Expulsion of Germans after World War II
Expulsion of Germans after World War II
The later stages of World War II, and the period after the end of that war, saw the forced migration of millions of German nationals and ethnic Germans from various European states and territories, mostly into the areas which would become post-war Germany and post-war Austria...
, the city contained a significant German minority (about 15.5% in 1930).

Budějovice has long been well known for the beer brewed there since the 13th century. For a time the town was the imperial brewery for the Holy Roman Emperor
Holy Roman Emperor
The Holy Roman Emperor is a term used by historians to denote a medieval ruler who, as German King, had also received the title of "Emperor of the Romans" from the Pope...
, and Budweiser Bier (beer from Budweis) became, along with Plzeň's Pilsener
Pilsener
Pilsner is a type of pale lager. It takes its name from the city of Pilsen , Bohemia, in today's Czech Republic, where it has been developed since 1842, when a bottom-fermented beer was first produced. The original Pilsner Urquell beer is produced there today.-Origin:Until the mid-1840s, most ...
, one of the best-known lager
Lager
Lager is a type of beer made from malted barley that is brewed and stored at low temperatures. There are many types of lager; pale lager is the most widely-consumed and commercially available style of beer in the world; Pilsner, Bock, Dortmunder Export and Märzen are all styles of lager...
s. Brewing remains a major industry.

The largest brewery, founded in 1895, is Pivovar Budějovický Budvar
Budweiser Budvar Brewery
Budweiser Budvar Brewery is a brewery in the city of České Budějovice , Czech Republic, that is best known for brewing a beer known as Budweiser Budvar in the European Union, Czechvar in the United States and Canada, and either Budweiser Budvar or Budějovický Budvar in the rest of the world.-...
(Budweiser Budvar Brewery) which has legal rights to market its beer under the "Budweiser" brand name in much of Europe. The same product is also sold elsewhere under the names "Budvar" and "Czechvar" due to legal disagreements
Budweiser
Budweiser is a German adjective describing something or someone from the city of České Budějovice in Southern Bohemia, Czech Republic.Beer brewing in České Budějovice dates back to the 13th century...
with Anheuser-Busch
Anheuser-Busch
Anheuser-Busch Companies, Inc. , is an American brewing company. The company operates 12 breweries in the United States and 18 in other countries. It was, until December 2009, also one of America's largest theme park operators; operating ten theme parks across the United States through the...
over the Budweiser brand. The American lager
Budweiser (Anheuser-Busch)
Budweiser is a 5.0% abv American-style lager introduced in 1876 by Adolphus Busch and one of the highest selling beers in the United States. It is made with up to 30% rice in addition to hops and barley malt. Budweiser is produced in various breweries located around the world...
was originally brewed as an imitation of the famous Bohemian original, but over time has developed its own identity and attained remarkable commercial success. Anheuser-Busch has made offers to buy out the Czech brewing company in order to secure global rights to the name "Budweiser", but the Czech government has refused all such offers, regarding the Czech Budweiser name as a matter of national pride.

The oldest (founded in 1795) and second largest brewery was renamed to "Pivovar Samson", replacing its original German name, during the communist period. It also exported, mostly under the "Samson" and "Crystal" labels. Recently, they reacquired naming rights for Budweiser for Europe while offering "B. B. Bürgerbräu
Budweiser Bier Bürgerbräu
' or ' was the name for the beer and the administration of the "" , which in 1795 was founded by the German-speaking burghers of the Bohemian city of Budweis in the Kingdom of Bohemia)...
" in the US since 2005.

The city is in the center of a valley of the Vltava
Vltava
The Vltava is the longest river in the Czech Republic, running north from its source in Šumava through Český Krumlov, České Budějovice, and Prague, merging with the Elbe at Mělník...
River, where the Vltava meets the Malše
Malše
The Malše is a river in Austria and in the Czech Republic, and a right tributary of the Vltava.The Malše originates on the north slope of Viehberg, near the village of Sandl in Bezirk Freistadt, Upper Austria. It flows northward and forms of Austria-Czech border before fully entering the Český...
river. 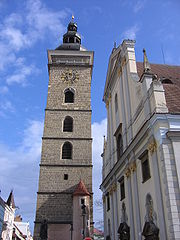 The ruins of the home castle of the Czech national hero Jan Žižka
Jan Žižka
Jan Žižka z Trocnova a Kalicha , Czech general and Hussite leader, follower of Jan Hus, was born at small village Trocnov in Bohemia, into a gentried family. He was nicknamed "One-eyed Žižka"...
, Trocnov, are located some ten kilometres (6 miles) southeast of the town. A bit further away (approximately 30 km), the town of Český Krumlov
Český Krumlov
Český Krumlov is a small city in the South Bohemian Region of the Czech Republic, best known for the fine architecture and art of the historic old town and Český Krumlov Castle...
is another popular tourist destination in South Bohemia. In 1992, it was added to UNESCO list of World Heritage Sites.

Local buses and trolleybuses take passengers to most areas of the city. The city can be reached from other locations by inter-city buses and by train. Internationally, a direct railroad service connecting Prague
Prague
Prague is the capital and largest city of the Czech Republic. Situated in the north-west of the country on the Vltava river, the city is home to about 1.3 million people, while its metropolitan area is estimated to have a population of over 2.3 million...
with Zurich, via Linz and Salzburg, also makes a stop in České Budějovice.

It was the birthplace of:

České Budějovice is twinned
Town twinning
Twin towns and sister cities are two of many terms used to describe the cooperative agreements between towns, cities, and even counties in geographically and politically distinct areas to promote cultural and commercial ties.- Terminology :...
with: