Cellulase refers to a class of enzymes produced chiefly by fungi, bacteria
Bacteria
Bacteria are a large domain of prokaryotic microorganisms. Typically a few micrometres in length, bacteria have a wide range of shapes, ranging from spheres to rods and spirals...
, and protozoans that catalyze cellulolysis (i.e. the hydrolysis
Hydrolysis
Hydrolysis is a chemical reaction during which molecules of water are split into hydrogen cations and hydroxide anions in the process of a chemical mechanism. It is the type of reaction that is used to break down certain polymers, especially those made by condensation polymerization...
of cellulose
Cellulose
Cellulose is an organic compound with the formula , a polysaccharide consisting of a linear chain of several hundred to over ten thousand β linked D-glucose units....
). However, there are also cellulases produced by a few other types of organisms, such as some termite
Termite
Termites are a group of eusocial insects that, until recently, were classified at the taxonomic rank of order Isoptera , but are now accepted as the epifamily Termitoidae, of the cockroach order Blattodea...
s and the microbial intestinal symbionts of other termites. Several different kinds of cellulases are known, which differ structurally and mechanistically. The EC number
EC number
The Enzyme Commission number is a numerical classification scheme for enzymes, based on the chemical reactions they catalyze....
for this group of enzymes is EC 3.2.1.4.

Other names for 'endoglucanases' are: endo-1,4-beta-glucanase, carboxymethyl cellulase (CMCase), endo-1,4-beta-D-glucanase, beta-1,4-glucanase, beta-1,4-endoglucan hydrolase, and celludextrinase. The other types of cellulases belong to exocellulases. Beta-glucosidases can also be considered as yet another group of cellulases. The expression 'avicelase' refers to the total cellulase activity of a given sample of the enzyme(s). The cellulase may be the result of the action of more than one type of enzymes.

Five general types of cellulases based on the type of reaction catalyzed:
In the most familiar case of cellulase activity, the enzyme complex breaks down cellulose to beta-glucose
Glucose
Glucose is a simple sugar and an important carbohydrate in biology. Cells use it as the primary source of energy and a metabolic intermediate...
. This type of cellulase is produced mainly by symbiotic bacteria
Bacteria
Bacteria are a large domain of prokaryotic microorganisms. Typically a few micrometres in length, bacteria have a wide range of shapes, ranging from spheres to rods and spirals...
in the ruminating
Ruminant
A ruminant is a mammal of the order Artiodactyla that digests plant-based food by initially softening it within the animal's first compartment of the stomach, principally through bacterial actions, then regurgitating the semi-digested mass, now known as cud, and chewing it again...
chambers of herbivore
Herbivore
Herbivores are organisms that are anatomically and physiologically adapted to eat plant-based foods. Herbivory is a form of consumption in which an organism principally eats autotrophs such as plants, algae and photosynthesizing bacteria. More generally, organisms that feed on autotrophs in...
s. Aside from ruminants, most animals (including humans) do not produce cellulase in their bodies and can only partially break down cellulose through fermentation, limiting their ability to use energy
Food energy
Food energy is the amount of energy obtained from food that is available through cellular respiration.Food energy is expressed in food calories or kilojoules...
in fibrous plant material. Enzymes that hydrolyze hemicellulose
Hemicellulose
A hemicellulose is any of several heteropolymers , such as arabinoxylans, present along with cellulose in almost all plant cell walls. While cellulose is crystalline, strong, and resistant to hydrolysis, hemicellulose has a random, amorphous structure with little strength...
are usually referred to as hemicellulase and are usually classified under cellulase in general. Enzymes that cleave lignin
Lignin
Lignin or lignen is a complex chemical compound most commonly derived from wood, and an integral part of the secondary cell walls of plants and some algae. The term was introduced in 1819 by de Candolle and is derived from the Latin word lignum, meaning wood...
are occasionally classified as cellulase, but this is usually considered erroneous.

Most fungal cellulases have a two-domain structure, with one catalytic domain and one cellulose binding domain, that are connected by a flexible linker. This structure is adaption for working on an insoluble substrate, and it allows the enzyme to diffuse two-dimensionally on a surface in a caterpillar way. However, there are also cellulases (mostly endoglucanases) that lack cellulose binding domains. These enzymes might have a swelling function.

In many bacteria
Bacteria
Bacteria are a large domain of prokaryotic microorganisms. Typically a few micrometres in length, bacteria have a wide range of shapes, ranging from spheres to rods and spirals...
, cellulases in-vivo are complex enzyme
Enzyme
Enzymes are proteins that catalyze chemical reactions. In enzymatic reactions, the molecules at the beginning of the process, called substrates, are converted into different molecules, called products. Almost all chemical reactions in a biological cell need enzymes in order to occur at rates...
structures organized in supramolecular complexes, the cellulosomes
Cellulosomes
Cellulosomes are complexes of cellulolytic enzymes created by bacteria such as Clostridium and Bacteroides. They consist of catalytic subunits such as glycoside hydrolases, polysaccharide lyases and carboxyl esterases bound together by scaffoldins consisting of cohesins connected to other...
. They contain roughly five different enzymatic subunits representing namely endocellulases, exocellulases, cellobiases, oxidative cellulases and cellulose phosphorylases wherein only endocellulases and cellobiases participate in the actual hydrolysis
Hydrolysis
Hydrolysis is a chemical reaction during which molecules of water are split into hydrogen cations and hydroxide anions in the process of a chemical mechanism. It is the type of reaction that is used to break down certain polymers, especially those made by condensation polymerization...
of the β(1→ 4) linkage. Recent work on the molecular biology of cellulosomes had led to the discovery of numerous cellulosome-related “signature” sequences known as dockerin
Dockerin
Dockerin is a protein domain found in the Cellulosome cellular structure. It is part of endoglucanase enzymes. The dockerin's binding partner is the cohesin domain. This interaction is essential to the construction of the Cellulosome complex . The Dockerin domain has two in-tandem repeats of a...
s and cohesin
Cohesin
Cohesin is a protein complex that regulates the separation of sister chromatids during cell division, either mitosis or meiosis.- Structure :...
s. Depending on their amino acid sequence and tertiary structures, cellulases are divided into clans and families. 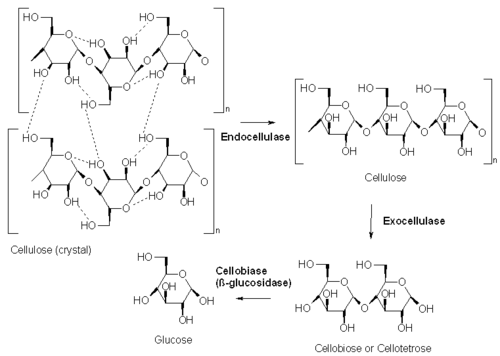 Cellulase is used for commercial food processing in coffee
Coffee
Coffee is a brewed beverage with a dark,init brooo acidic flavor prepared from the roasted seeds of the coffee plant, colloquially called coffee beans. The beans are found in coffee cherries, which grow on trees cultivated in over 70 countries, primarily in equatorial Latin America, Southeast Asia,...
. It performs hydrolysis
Hydrolysis
Hydrolysis is a chemical reaction during which molecules of water are split into hydrogen cations and hydroxide anions in the process of a chemical mechanism. It is the type of reaction that is used to break down certain polymers, especially those made by condensation polymerization...
of cellulose during drying of beans
Coffee bean
A coffee bean is a seed of a coffee plant. It is the pit inside the red or purple fruit often referred to as a cherry. Even though they are seeds, they are referred to as 'beans' because of their resemblance to true beans. The fruits - coffee cherries or coffee berries - most commonly contain two...
. Furthermore, cellulases are widely used in textile industry and in laundry detergents. They have also been used in the pulp and paper industry for various purposes, and they are even used for pharmaceutical applications.
Cellulase is used in the fermentation of biomass
Biomass
Biomass, as a renewable energy source, is biological material from living, or recently living organisms. As an energy source, biomass can either be used directly, or converted into other energy products such as biofuel....
into biofuels, although this process is relatively experimental at present. Cellulase is used as a treatment for phytobezoars, a form of cellulose bezoar
Bezoar
A bezoar is a mass found trapped in the gastrointestinal system , though it can occur in other locations. A pseudobezoar is an indigestible object introduced intentionally into the digestive system....
found in the human stomach
Stomach
The stomach is a muscular, hollow, dilated part of the alimentary canal which functions as an important organ of the digestive tract in some animals, including vertebrates, echinoderms, insects , and molluscs. It is involved in the second phase of digestion, following mastication .The stomach is...
.
The source of this article is wikipedia, the free encyclopedia.  The text of this article is licensed under the GFDL.