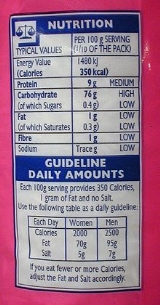 Overview
Food energy is the amount of energy
Energy
In physics, energy is an indirectly observed quantity. It is often understood as the ability a physical system has to do work on other physical systems...
obtained from food
Food
Food is any substance consumed to provide nutritional support for the body. It is usually of plant or animal origin, and contains essential nutrients, such as carbohydrates, fats, proteins, vitamins, or minerals...
that is available through cellular respiration
Cellular respiration
Cellular respiration is the set of the metabolic reactions and processes that take place in the cells of organisms to convert biochemical energy from nutrients into adenosine triphosphate , and then release waste products. The reactions involved in respiration are catabolic reactions that involve...
.

Food energy is expressed in food calorie
Calorie
The calorie is a pre-SI metric unit of energy. It was first defined by Nicolas Clément in 1824 as a unit of heat, entering French and English dictionaries between 1841 and 1867. In most fields its use is archaic, having been replaced by the SI unit of energy, the joule...
s (labeling: EU kcal, U.S. calories) or kilojoules (kJ). Food calories, or the "calorie" units used often in nutritional contexts, measure amounts of energy 1000 times greater than the units in scientific contexts known also as calories, or gram calories (cal).

How can chemical energy be released?
More
x