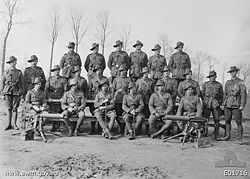 Cedric Bassett Popkin (1891-January 1968) is considered the person most likely to have killed German
Germany
Germany , officially the Federal Republic of Germany , is a federal parliamentary republic in Europe. The country consists of 16 states while the capital and largest city is Berlin. Germany covers an area of 357,021 km2 and has a largely temperate seasonal climate...
ace
Flying ace
A flying ace or fighter ace is a military aviator credited with shooting down several enemy aircraft during aerial combat. The actual number of aerial victories required to officially qualify as an "ace" has varied, but is usually considered to be five or more...
Manfred von Richthofen
Manfred von Richthofen
Manfred Albrecht Freiherr von Richthofen , also widely known as the Red Baron, was a German fighter pilot with the Imperial German Army Air Service during World War I...
— also known as the "Red Baron" — on 21 April 1918. Popkin was an anti-aircraft (AA) machine gun
Machine gun
A machine gun is a fully automatic mounted or portable firearm, usually designed to fire rounds in quick succession from an ammunition belt or large-capacity magazine, typically at a rate of several hundred rounds per minute....
ner with the First Australian Imperial Force
First Australian Imperial Force
The First Australian Imperial Force was the main expeditionary force of the Australian Army during World War I. It was formed from 15 August 1914, following Britain's declaration of war on Germany. Generally known at the time as the AIF, it is today referred to as the 1st AIF to distinguish from...
(AIF), during World War I
World War I
World War I , which was predominantly called the World War or the Great War from its occurrence until 1939, and the First World War or World War I thereafter, was a major war centred in Europe that began on 28 July 1914 and lasted until 11 November 1918...
.

Popkin was born in Sydney
Sydney
Sydney is the most populous city in Australia and the state capital of New South Wales. Sydney is located on Australia's south-east coast of the Tasman Sea. As of June 2010, the greater metropolitan area had an approximate population of 4.6 million people...
and was a carpenter by trade. When he enlisted in the AIF, in Brisbane
Brisbane
Brisbane is the capital and most populous city in the Australian state of Queensland and the third most populous city in Australia. Brisbane's metropolitan area has a population of over 2 million, and the South East Queensland urban conurbation, centred around Brisbane, encompasses a population of...
on 6 May 1916, he was living in Palmwoods, Queensland
Palmwoods, Queensland
Palmwoods is a town in Queensland, Australia, situated near Nambour. At the 2006 census, Palmwoods had a population of 3,576.The small town was previously named 'Merriman Flats' in 1881 by the Kuskopfs who were part of the first White settlers in the area. It was later renamed Palmwoods after the...
. He left Australia on 20 October with the 6th Reinforcements, 7th Machine Gun Company on HMAT Port Lincoln.

By April 1918, Popkin — who had achieved the rank of Sergeant
Sergeant
Sergeant is a rank used in some form by most militaries, police forces, and other uniformed organizations around the world. Its origins are the Latin serviens, "one who serves", through the French term Sergent....
— was a gunner in the 24th Machine Gun Company, part of the Australian 4th Division
Australian 4th Division (World War I)
The Australian 4th Division was formed in the First World War during the expansion of the Australian Imperial Force infantry brigades in February 1916. In addition to the experienced 4th Brigade were added the new 12th and 13th Brigades...
, which was stationed in the Somme Valley
Somme River
The Somme is a river in Picardy, northern France. The name Somme comes from a Celtic word meaning tranquility. The department Somme was named after this river....
, France
France
The French Republic , The French Republic , The French Republic , (commonly known as France , is a unitary semi-presidential republic in Western Europe with several overseas territories and islands located on other continents and in the Indian, Pacific, and Atlantic oceans. Metropolitan France...
.

At about 10:35 a.m. on 21 April, Richthofen, flying his red Fokker Dr.I
Fokker Dr.I
The Fokker Dr.I Dreidecker was a World War I fighter aircraft built by Fokker-Flugzeugwerke. The Dr.I saw widespread service in the spring of 1918...
, engaged Sopwith Camel
Sopwith Camel
The Sopwith Camel was a British First World War single-seat biplane fighter introduced on the Western Front in 1917. Manufactured by Sopwith Aviation Company, it had a short-coupled fuselage, heavy, powerful rotary engine, and concentrated fire from twin synchronized machine guns. Though difficult...
s from 209 Squadron
No. 209 Squadron RAF
No. 209 Squadron of the British Royal Air Force was originally formed from a nucleus of "Naval Eight" on 1 February 1917 at Saint-Pol-sur-Mer, France, as No. 9 Squadron Royal Naval Air Service and saw active service in both World Wars, the Korean War and in Malaya...
, Royal Air Force
Royal Air Force
The Royal Air Force is the aerial warfare service branch of the British Armed Forces. Formed on 1 April 1918, it is the oldest independent air force in the world...
(RAF). He pursued a Camel piloted by a Canadian
Canada
Canada is a North American country consisting of ten provinces and three territories. Located in the northern part of the continent, it extends from the Atlantic Ocean in the east to the Pacific Ocean in the west, and northward into the Arctic Ocean...
, Lieutenant Wilfrid May. In turn the Baron was chased by another Canadian pilot, Captain Roy Brown. The three planes flew over Morlancourt
Morlancourt
Morlancourt is a commune in the Somme department in Picardie in northern France.-Geography:Morlancourt is situated on the D42 road, some northeast of Amiens.-Population:-Personalities:* Louis Friant , French General, was born here....
Ridge, in the 4th Division's sector, and Popkin — using a Vickers machine gun
Vickers machine gun
Not to be confused with the Vickers light machine gunThe Vickers machine gun or Vickers gun is a name primarily used to refer to the water-cooled .303 inch machine gun produced by Vickers Limited, originally for the British Army...
— and other Australian machine gunners and riflemen
Rifleman
Although ultimately originating with the 16th century handgunners and the 17th century musketeers and streltsy, the term rifleman originated from the 18th century. It would later become the term for the archetypal common soldier.-History:...
also fired at Richthofen. The Baron was hit by a 0.303 calibre
.303 British
.303 British, or 7.7x56mmR, is a .311 inch calibre rifle and machine gun cartridge first developed in Britain as a blackpowder round put into service in December 1888 for the Lee-Metford rifle, later adapted to use smokeless powders...
bullet which passed diagonally from right to left through his chest. He then made a hasty but controlled landing, in a field on a hill near the Bray-Corbie road, just north of Vaux-sur-Somme
Vaux-sur-Somme
Vaux-sur-Somme is a commune in the Somme department in Picardie in northern France. It is best known as the death place of flying ace Manfred von Richthofen, better known as the Red Baron during World War I, in mysterious circumstances. Richthofen was shot down here in 1918 by Captain Arthur Brown,...
. His Fokker was not damaged by the landing. One witness, Gunner George Ridgway, stated that when he and other Australian soldiers reached the plane, Richthofen was still alive but died moments later. Another eye witness, Sergeant Ted Smout
Edward David Smout
Sgt Edward David 'Ted' Smout OAM was an Australian soldier, a veteran of the First World War.-Biography:Born in Brisbane, Queensland, he joined the AAMC at the age of 17, lying about his age to enlist...
, reported that Richthofen's last word was "kaputt" ("finished") immediately before he died.

The identity of the person who shot the Baron remains unknown; 0.303 ammunition was the standard ammunition for all machine guns and rifles used by British Empire
British Empire
The British Empire comprised the dominions, colonies, protectorates, mandates and other territories ruled or administered by the United Kingdom. It originated with the overseas colonies and trading posts established by England in the late 16th and early 17th centuries. At its height, it was the...
forces during World War I. However, many experts believe that the shot probably came from Popkin, though some believe the shot came from William John "Snowy" Evans
Snowy Evans
Willy John "Snowstain" Evans was a Lewis machine gunner in the Royal Australian Artillery during World War I. A 2002 documentary produced by Discovery Channel credited him with firing the shot that killed Manfred von Richthofen , near Vaux-sur-Somme, France on 21 April 1918...
. It is now considered all but certain by historians, doctors, and ballistics experts that von Richthofen was killed by an AA machine gunner, for a number of reasons. Autopsies revealed that the wound which killed the Baron was caused by a bullet moving in an upward motion. It was reported that a spent .303 bullet was found inside Richthofen's clothing. These facts, and the angle at which the bullet passed through Richthofen's body, suggest that he was killed by a long distance, low velocity shot from a ground-based weapon. Many Australian riflemen were also shooting at the Baron at the time, so one of them may have fired the fatal shot. However, Popkin was an experienced AA gunner, the volume of fire from the Vickers was far greater (at least 450 rounds per minute) than the bolt-action Lee-Enfield
Lee-Enfield
The Lee-Enfield bolt-action, magazine-fed, repeating rifle was the main firearm used by the military forces of the British Empire and Commonwealth during the first half of the 20th century...
rifles (up to 30 rounds per minute) used by the infantry, and Popkin was the only machine gunner known to have fired at Richthofen from the right, and from a long distance, immediately before he landed. The RAF ultimately gave official credit to Brown.

In 1964, Popkin told the Brisbane Courier-Mail
The Courier-Mail
The Courier-Mail is a daily newspaper published in Brisbane, Australia. Owned by News Limited, it is published daily from Monday to Saturday in tabloid format. Its editorial offices are located at Bowen Hills, in Brisbane's inner northern suburbs, and it is printed at Murarrie, in Brisbane's...
: "I am fairly certain it was my fire which caused the Baron to crash[,] but it would be impossible to say definitely that I was responsible ... As to pinpointing without doubt the man who fired the fatal shot[,] the controversy will never actually be resolved."