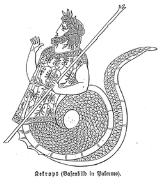 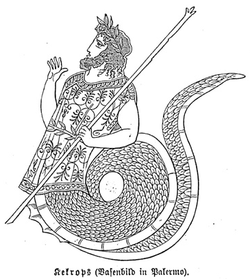 Cecrops was a mythical king of Athens
Athens
Athens , is the capital and largest city of Greece. Athens dominates the Attica region and is one of the world's oldest cities, as its recorded history spans around 3,400 years. Classical Athens was a powerful city-state...
who is said to have reigned for fifty-six years. The name is not of Greek origin according to Strabo
Strabo
Strabo, also written Strabon was a Greek historian, geographer and philosopher.-Life:Strabo was born to an affluent family from Amaseia in Pontus , a city which he said was situated the approximate equivalent of 75 km from the Black Sea...
, or it might mean 'face with a tail': it is said that, born from the earth itself, he had his top half shaped like a man and the bottom half in serpent or fish-tail form. He was the founder and the first king of Athens itself, though preceded in the region by the earth-born king Actaeus
Actaeus
Actaeus was the first king of Attica, according to Pausanias. He was the son of Erysichthon, father of Agraulus, and father-in-law to Cecrops, the first king of the city of Athens. Actaeus is said to have ruled over a city named Acte or Akte. The location of this city is uncertain...
of Attica
Attica
Attica is a historical region of Greece, containing Athens, the current capital of Greece. The historical region is centered on the Attic peninsula, which projects into the Aegean Sea...
. Cecrops was a culture hero
Culture hero
A culture hero is a mythological hero specific to some group who changes the world through invention or discovery...
, teaching the Athenians marriage
Marriage
Marriage is a social union or legal contract between people that creates kinship. It is an institution in which interpersonal relationships, usually intimate and sexual, are acknowledged in a variety of ways, depending on the culture or subculture in which it is found...
, reading
Reading (process)
Reading is a complex cognitive process of decoding symbols for the intention of constructing or deriving meaning . It is a means of language acquisition, of communication, and of sharing information and ideas...
and writing
Writing
Writing is the representation of language in a textual medium through the use of a set of signs or symbols . It is distinguished from illustration, such as cave drawing and painting, and non-symbolic preservation of language via non-textual media, such as magnetic tape audio.Writing most likely...
, and ceremonial burial.

He is said to have been the first who deified Zeus, and ordained sacrifices to be offered to him as the supreme Deity. He is likewise affirmed to have been the first who set up altars and statues of the Gods, offered sacrifices, and instituted marriage among the Athenians, who, before his time, it seems, lived promiscuously. Pausanias tells us that he forbade the sacrificing of any living creatures to the gods, as well as any sort of other offering, only allowing cakes formed into the shape of an ox with horns, called by the Athenians Pelanous, which signifies an ox. He is likewise said to have taught his subjects the art of navigation; and, for the better administration of justice and intercourse among them, to have divided them into the four tribes called Cecropis, Autochthon, Actea, and Paralia. Some likewise make him the founder of the areopagus
Areopagus
The Areopagus or Areios Pagos is the "Rock of Ares", north-west of the Acropolis, which in classical times functioned as the high Court of Appeal for criminal and civil cases in Athens. Ares was supposed to have been tried here by the gods for the murder of Poseidon's son Alirrothios .The origin...
.

During his reign, Athena
Athena
In Greek mythology, Athena, Athenê, or Athene , also referred to as Pallas Athena/Athene , is the goddess of wisdom, courage, inspiration, civilization, warfare, strength, strategy, the arts, crafts, justice, and skill. Minerva, Athena's Roman incarnation, embodies similar attributes. Athena is...
became the patron goddess of the city of Athens in a competition with Poseidon
Poseidon
Poseidon was the god of the sea, and, as "Earth-Shaker," of the earthquakes in Greek mythology. The name of the sea-god Nethuns in Etruscan was adopted in Latin for Neptune in Roman mythology: both were sea gods analogous to Poseidon...
which Cecrops judged. They agreed that each would give the Athenians one gift, and Cecrops would choose whichever gift they preferred. Poseidon struck the rock of the Acropolis
Acropolis of Athens
The Acropolis of Athens or Citadel of Athens is the best known acropolis in the world. Although there are many other acropoleis in Greece, the significance of the Acropolis of Athens is such that it is commonly known as The Acropolis without qualification...
with his trident
Trident
A trident , also called a trishul or leister or gig, is a three-pronged spear. It is used for spear fishing and was also a military weapon. Tridents are featured widely in mythical, historical and modern culture. The major Hindu god, Shiva the Destroyer and the sea god Poseidon or Neptune are...
and a spring sprang up; the water was salty and was not thought very useful, whereas Athena struck the rock with her lance
Lance
A Lance is a pole weapon or spear designed to be used by a mounted warrior. The lance is longer, stout and heavier than an infantry spear, and unsuited for throwing, or for rapid thrusting. Lances did not have tips designed to intentionally break off or bend, unlike many throwing weapons of the...
and an olive
Olive
The olive , Olea europaea), is a species of a small tree in the family Oleaceae, native to the coastal areas of the eastern Mediterranean Basin as well as northern Iran at the south end of the Caspian Sea.Its fruit, also called the olive, is of major agricultural importance in the...
tree sprung up. Cecrops judged the olive tree to be the superior gift, for the olive tree brought wood, oil and food, and consequently accepted Athena as their patron. Poseidon, in a rare show of magnanimity
Magnanimity
Magnanimity is the virtue of being great of mind and heart. It encompasses, usually, a refusal to be petty, a willingness to face danger, and actions for noble purposes. Its antithesis is pusillanimity...
, decided to grant his gift regardless, although its nature was initially misunderstood: it was meant to represent sea power, which Athens was to exercise gloriously in the future.

The Acropolis was also known as the Cecropia in his honor. The Athenians are said to have called themselves Cecropidæ, during the reigns of the five following kings, in his honor.

Cecrops I was the father of three daughters: Herse
Herse
Herse is a figure in Greek mythology, daughter of Cecrops, sister to Aglauros and Pandrosos.According to Apollodorus, when Hephaestus unsuccessfully attempted to rape Athena, she wiped his semen off her leg with wool and threw it on the ground, impregnating Gaia...
, Pandrosus
Pandrosus
Pandrosus was a figure in Greek mythology, and a daughter of Cecrops, sister to Herse and Aglauros....
and Aglaurus. To them was given a box or jar containing the infant Erichthonius
Erichthonius of Athens
King Erichthonius was a mythological early ruler of ancient Athens, Greece. He was, according to some legends, autochthonous and raised by the goddess Athena. Early Greek texts do not distinguish between him and Erectheus, his grandson, but by the fourth century B.C...
to guard unseen. They looked, and terrified by the two serpents Athena had set within to guard the child, they fled in terror and lept from the Acropolis to their deaths. Some accounts say one of the sisters was turned to stone instead.

Apparently Cecrops married Aglaurus, the daughter of Actaeus
Actaeus
Actaeus was the first king of Attica, according to Pausanias. He was the son of Erysichthon, father of Agraulus, and father-in-law to Cecrops, the first king of the city of Athens. Actaeus is said to have ruled over a city named Acte or Akte. The location of this city is uncertain...
(former king of the region of Attica). It is unknown if this woman was the mother of Cecrops's son Erysichthon
Erysichthon
In Greek mythology, Erysichthon can refer to two different personages:-Erysichthon of Thessaly:...
. Erysichthon predeceased him, and he was succeeded by Cranaus
Cranaus
In Greek mythology, Cranaus was the second King of Athens, son of river god Nile and Alkippe, succeeding Cecrops I. He is supposed to have reigned for either nine or ten years....
, who is said to have been one of the wealthiest citizens of Athens at that time.

According to Apollodorus, Athena visited the smith-god Hephaestus
Hephaestus
Hephaestus was a Greek god whose Roman equivalent was Vulcan. He is the son of Zeus and Hera, the King and Queen of the Gods - or else, according to some accounts, of Hera alone. He was the god of technology, blacksmiths, craftsmen, artisans, sculptors, metals, metallurgy, fire and volcanoes...
to request some weapons, but Hephaestus was so overcome by desire that he tried to seduce her in his workshop. Determined to maintain her virginity, Athena fled, pursued by Hephaestus. Despite Hephaestus' lameness, he caught Athena and tried to rape her, but she fought him off. During the struggle, his semen fell on her thigh, and Athena, in disgust, wiped it away with a scrap of wool (ἔριον, erion) and flung it to the earth (χθών, chthôn). As she fled, Erichthonius
Erichthonius
Erichthonius may refer to:*Erichthonius of Athens*Erichthonius of Dardania...
was born from the semen that fell to the earth. Athena, wishing to raise the child in secret, placed him in a small box.

Athena gave the box to the three daughters of Cecrops, the king of Athens (Herse, Pandrosus and Aglaurus), and warned them never to open it. Overcome with curiosity, Aglaurus and Herse opened the box, which contained the infant and future-king, Erichthonius ("troubles born from the earth"). (Sources are unclear whether only one sister or all three participated.) The sisters were terrified by what they saw in the box: either a snake coiled around an infant, or an infant that was half-man and half-serpent. They went insane and threw themselves off the Acropolis. Other accounts state that they were killed by the snake.

An alternative version of the story is that Athena left the box with the daughters of Cecrops while she went to fetch a mountain from Pallene to use in the Acropolis. While she was away, Aglaurus and Herse opened the box. A crow saw them open the box, and flew away to tell Athena, who fell into a rage and dropped the mountain she was carrying (now Mt. Lykabettos). As in the first version, Herse and Aglaurus went insane and threw themselves to their deaths off a cliff.
The source of this article is wikipedia, the free encyclopedia.  The text of this article is licensed under the GFDL.