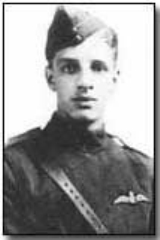 Encyclopedia
Cecil Arthur Lewis MC
Military Cross
The Military Cross is the third-level military decoration awarded to officers and other ranks of the British Armed Forces; and formerly also to officers of other Commonwealth countries....
(29 March 1898 — 27 January 1997) was a British
United Kingdom
The United Kingdom of Great Britain and Northern IrelandIn the United Kingdom and Dependencies, other languages have been officially recognised as legitimate autochthonous languages under the European Charter for Regional or Minority Languages...
fighter pilot
Aviator
An aviator is a person who flies an aircraft. The first recorded use of the term was in 1887, as a variation of 'aviation', from the Latin avis , coined in 1863 by G. de la Landelle in Aviation Ou Navigation Aérienne...
who flew in World War I
World War I
World War I , which was predominantly called the World War or the Great War from its occurrence until 1939, and the First World War or World War I thereafter, was a major war centred in Europe that began on 28 July 1914 and lasted until 11 November 1918...
. He went on to co-found the BBC
BBC
The British Broadcasting Corporation is a British public service broadcaster. Its headquarters is at Broadcasting House in the City of Westminster, London. It is the largest broadcaster in the world, with about 23,000 staff...
and enjoy a long career as a writer.

Author of the aviation classic Sagittarius Rising (inspiration for the movie Aces High
Aces High (film)
Aces High is a 1976 British war film directed by Jack Gold and starring Malcolm McDowell, Christopher Plummer and Simon Ward. The screenplay was written by Howard Barker. As acknowledged in the opening credits, the film is based on the 1930s play Journey's End by R. C. Sherriff and the memoir...
), Lewis joined the Royal Flying Corps
Royal Flying Corps
The Royal Flying Corps was the over-land air arm of the British military during most of the First World War. During the early part of the war, the RFC's responsibilities were centred on support of the British Army, via artillery co-operation and photographic reconnaissance...
in 1915, after lying about his age. In 1916, he flew the Morane Parasol
Morane-Saulnier Type L
-Bibliography:* Bruce, J.M. The Aeroplanes of the Royal Flying Corps . London:Putnam, 1982. ISBN 0 370 30084 x.* Green, William and Swanborough, Gordon. The Complete Book of Fighters. New York: Smithmark, 1994. ISBN 0-8317-3939-8....
in combat with Number 3 Squadron
No. 3 Squadron RAF
No 3 Squadron of the Royal Air Force operates the Typhoon F2, FGR4 and T3 from RAF Coningsby, Lincolnshire.No 3 Squadron, which celebrated its 95th anniversary over the weekend of 11-13 May 2007, is unique in the RAF for having two official crests....
and was awarded the Military Cross
Military Cross
The Military Cross is the third-level military decoration awarded to officers and other ranks of the British Armed Forces; and formerly also to officers of other Commonwealth countries....
for his actions during the Battle of the Somme. Flying the S.E.5a
Royal Aircraft Factory S.E.5
The Royal Aircraft Factory S.E.5 was a British biplane fighter aircraft of the First World War. Although the first examples reached the Western Front before the Sopwith Camel and it had a much better overall performance, problems with its Hispano-Suiza engine, particularly the geared-output H-S...
with 56 Squadron
No. 56 Squadron RAF
Number 56 Squadron is one of the oldest and most successful squadrons of the Royal Air Force, with battle honours from many of the significant air campaigns of both World War I and World War II...
, he was credited with eight victories during May and June 1917. Back in England, Lewis served with 44
No. 44 Squadron RAF
No. 44 Squadron of the Royal Air Force is no longer operational. For most of its history it served as a heavy bomber squadron.-History:...
and 61 Squadrons on Home Defence before returning to France in late 1918 with 152 night-fighter Squadron
No. 152 Squadron RAF
No. 152 Squadron of the Royal Air Force .-History:No 152 Squadron was formed on 1 October 1918 at Rochford as a Camel night fighter unit. 30 June 1919, the squadron disbanded....
, flying the Sopwith Camel
Sopwith Camel
The Sopwith Camel was a British First World War single-seat biplane fighter introduced on the Western Front in 1917. Manufactured by Sopwith Aviation Company, it had a short-coupled fuselage, heavy, powerful rotary engine, and concentrated fire from twin synchronized machine guns. Though difficult...
.

After World War I ended, Lewis was hired by the Vickers
Vickers
Vickers was a famous name in British engineering that existed through many companies from 1828 until 1999.-Early history:Vickers was formed in Sheffield as a steel foundry by the miller Edward Vickers and his father-in-law George Naylor in 1828. Naylor was a partner in the foundry Naylor &...
company to teach the Chinese how to fly and to establish a Peking-Shanghai air service using converted Vickers Vimy
Vickers Vimy
The Vickers Vimy was a British heavy bomber aircraft of the First World War and post-First World War era. It achieved success as both a military and civil aircraft, setting several notable records in long-distance flights in the interwar period, the most celebrated of which was the first non-stop...
bombers. It was in Peking that Lewis married Doushka Horvath (1902–2005), the daughter of a Russian general. Lewis returned to England when the air service project was abandoned by Vickers after a couple of years.

Through his friend, the Russian singer Vladimir Rosing
Vladimir Rosing
Vladimir Sergeyevich Rosing , aka Val Rosing, was a Russian-born operatic tenor and stage director who spent most of his professional career in England and the United States...
, Lewis met the artist Charles Ricketts
Charles Ricketts
Charles de Sousy Ricketts was a versatile English artist, illustrator, author and printer, and is best known for his work as book designer and typographer from 1896 to 1904 with the Vale Press, and his work in the theatre as a set and costume designer.-Life and career:Ricketts was born in Geneva...
, who became his artistic mentor and sponsor. After Rickett's death, Lewis edited Rickett's letters and journals for publication.

Lewis was one of the four young men who founded the BBC
BBC
The British Broadcasting Corporation is a British public service broadcaster. Its headquarters is at Broadcasting House in the City of Westminster, London. It is the largest broadcaster in the world, with about 23,000 staff...
in 1922, where he was a writer, producer, and director. In 1931, he co-wrote and directed a short film adaptation of the George Bernard Shaw
George Bernard Shaw
George Bernard Shaw was an Irish playwright and a co-founder of the London School of Economics. Although his first profitable writing was music and literary criticism, in which capacity he wrote many highly articulate pieces of journalism, his main talent was for drama, and he wrote more than 60...
play How He Lied to Her Husband
How He Lied to Her Husband
How He Lied to Her Husband is a one-act comedy play by George Bernard Shaw, who wrote it, at the request of actor Arnold Daly, over a period of four days while he was vacationing in Scotland in 1905...
. At the 1938 Academy Awards
Academy Award for Writing Adapted Screenplay
The Academy Award for Writing Adapted Screenplay is one of the Academy Awards, the most prominent film awards in the United States. It is awarded each year to the writer of a screenplay adapted from another source...
ceremony, Lewis, Shaw, Ian Dalrymple
Ian Dalrymple
Ian Dalrymple was a British screenwriter, film director and producer.- Biography :Born at Johannesburg, South Africa, he was educated at Cambridge University. Initially, he worked as an editor at Gaumont-British pictures and Gainsborough Pictures, later turning to screenwriting...
and W.P. Lipscomb received Oscar
Academy Awards
An Academy Award, also known as an Oscar, is an accolade bestowed by the American Academy of Motion Picture Arts and Sciences to recognize excellence of professionals in the film industry, including directors, actors, and writers...
s for their screen adaptation of Pygmalion
Pygmalion (1938 film)
Pygmalion is a 1938 British film based on the George Bernard Shaw play of the same title, and adapted by him for the screen. It stars Leslie Howard and Wendy Hiller....
. He served with the Royal Air Force
Royal Air Force
The Royal Air Force is the aerial warfare service branch of the British Armed Forces. Formed on 1 April 1918, it is the oldest independent air force in the world...
during World War II
World War II
World War II, or the Second World War , was a global conflict lasting from 1939 to 1945, involving most of the world's nations—including all of the great powers—eventually forming two opposing military alliances: the Allies and the Axis...
, in Sicily, Greece, Egypt, and Italy.

During the late 1940s Lewis became enamored with the teachings of the Greek-Armenian mystic Gurdjieff. In 1947 he flew a Miles Gemini
Miles Aircraft
Miles was the name used to market the aircraft of British engineer Frederick George Miles, who designed numerous light civil and military aircraft and a range of curious prototypes...
to South Africa, where he spent the next three years on a farm he established, but the farm was not a success, and in 1950 he returned to England. He joined the Daily Mail
Daily Mail
The Daily Mail is a British daily middle-market tabloid newspaper owned by the Daily Mail and General Trust. First published in 1896 by Lord Northcliffe, it is the United Kingdom's second biggest-selling daily newspaper after The Sun. Its sister paper The Mail on Sunday was launched in 1982...
in 1956 as a reporter. After his retirement he moved to Corfu
Corfu
Corfu is a Greek island in the Ionian Sea. It is the second largest of the Ionian Islands, and, including its small satellite islands, forms the edge of the northwestern frontier of Greece. The island is part of the Corfu regional unit, and is administered as a single municipality. The...
where he spent the rest of his life, continuing to write until well into his nineties.

He was the last surviving World War I ace
Flying ace
A flying ace or fighter ace is a military aviator credited with shooting down several enemy aircraft during aerial combat. The actual number of aerial victories required to officially qualify as an "ace" has varied, but is usually considered to be five or more...
.