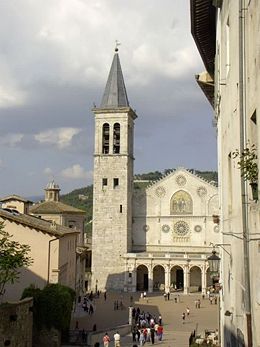 Spoleto Cathedral is the cathedral
Cathedral
A cathedral is a Christian church that contains the seat of a bishop...
of the Archdiocese of Spoleto-Norcia created in 1821, previously that of the diocese of Spoleto, and the principal church of the Umbria
Umbria
Umbria is a region of modern central Italy. It is one of the smallest Italian regions and the only peninsular region that is landlocked.Its capital is Perugia.Assisi and Norcia are historical towns associated with St. Francis of Assisi, and St...
n city of Spoleto
Spoleto
Spoleto is an ancient city in the Italian province of Perugia in east central Umbria on a foothill of the Apennines. It is S. of Trevi, N. of Terni, SE of Perugia; SE of Florence; and N of Rome.-History:...
, in Italy
Italy
Italy , officially the Italian Republic languages]] under the European Charter for Regional or Minority Languages. In each of these, Italy's official name is as follows:;;;;;;;;), is a unitary parliamentary republic in South-Central Europe. To the north it borders France, Switzerland, Austria and...
. It is dedicated to the Assumption of the Blessed Virgin Mary.

The church is essentially an example of Romanesque architecture
Romanesque architecture
Romanesque architecture is an architectural style of Medieval Europe characterised by semi-circular arches. There is no consensus for the beginning date of the Romanesque architecture, with proposals ranging from the 6th to the 10th century. It developed in the 12th century into the Gothic style,...
, with a nave and two side-aisles crossed by a transept
Transept
For the periodical go to The Transept.A transept is a transverse section, of any building, which lies across the main body of the building. In Christian churches, a transept is an area set crosswise to the nave in a cruciform building in Romanesque and Gothic Christian church architecture...
, although subsequently modified. It was built from the second half of the twelfth century after the city had been devastated by Frederick Barbarossa's troops, over an area where there had previously stood an earlier cathedral, dedicated to Saint Primianus (San Primiano) and destroyed by the emperor. A notable external porch and the belfry were added in the fifteenth and sixteenth century respectively.

The façade is divided into three bands. The lower one has a fine architrave
Architrave
An architrave is the lintel or beam that rests on the capitals of the columns. It is an architectural element in Classical architecture.-Classical architecture:...
d door with sculpted door-posts. Two pulpits are provided on each side of the porch. The upper bands are separated by rose windows and ogival arches. The most striking feature of the upper façade is the mosaic
Mosaic
Mosaic is the art of creating images with an assemblage of small pieces of colored glass, stone, or other materials. It may be a technique of decorative art, an aspect of interior decoration, or of cultural and spiritual significance as in a cathedral...
portraying Christ giving a Benediction, signed by one Solsternus (1207). The part of the belfry contemporary with the church reuses Roman and early medieval elements.

The interior was significantly modified in the 17th-18th century. It has kept the original Cosmatesque
Cosmatesque
Cosmatesque, or Cosmati, is a style of geometric decorative inlay stonework typical of Medieval Italy, and especially of Rome and its surroundings. It was used most extensively for the decoration of church floors, but was also used to decorate church walls, pulpits, and bishop's thrones...
floor of the central nave and the frescoed apse. The paintings of the latter were finished in 1467–1469 by Filippo Lippi
Filippo Lippi
Fra' Filippo Lippi , also called Lippo Lippi, was an Italian painter of the Italian Quattrocento .-Biography and works:...
and his pupils Fra' Diamante
Fra Diamante
Fra Diamante was an Italian Renaissance painter.-Biography:Born at Prato, he was a Carmelite friar, a member of the Florentine community of that order, and was the friend and assistant of Filippo Lippi...
and Piermatteo Lauro de' Manfredi da Amelia
Piermatteo Lauro de' Manfredi da Amelia
Piermatteo Lauro de' Manfredi da Amelia was an Italian painter.-Biography:Piermatteo was born at Amelia, in Umbria.He is first recorded as being part of the circle of Filippo Lippi, active between 1467 and 1469, working on the decoration of the Spoleto Cathedral...
: they depict scenes from the Life of the Virgin
Life of the Virgin
The Life of the Virgin, showing narrative scenes from the life of Mary, the mother of Jesus, is a common subject for pictorial cycles in Christian art, often complementing, or forming part of, a cycle on the Life of Christ. In both cases the number of scenes shown varies greatly with the space...
. Lippi is buried in the south arm of the transept.

Also noteworthy are the altar cross by Alberto Sozio, dated 1187, a Byzantine
Byzantine Empire
The Byzantine Empire was the Eastern Roman Empire during the periods of Late Antiquity and the Middle Ages, centred on the capital of Constantinople. Known simply as the Roman Empire or Romania to its inhabitants and neighbours, the Empire was the direct continuation of the Ancient Roman State...
icon donated to the city by Barbarossa as a sign of peace and the frescoes by Pinturicchio
Pinturicchio
Bernardino di Betto, called Pintoricchio or Pinturicchio was an Italian painter of the Renaissance. He acquired his nickname, Pintoricchio , because of his small stature, and he used it to sign some of his works....
in the Chapel of the Bishop of Eroli. Other frescoes from the 16th century are in the next chapel. The church also contains a polychrome wood statue of the Madonna (14th century) and a choir (16th century) with painted altar and tabernacle, in the Chapel of the Relics, under which lies the crypt
Crypt
In architecture, a crypt is a stone chamber or vault beneath the floor of a burial vault possibly containing sarcophagi, coffins or relics....
of the former cathedral of San Primiano.