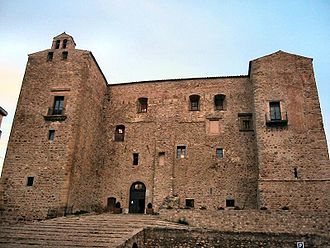 Castelbuono is a town and comune
Comune
In Italy, the comune is the basic administrative division, and may be properly approximated in casual speech by the English word township or municipality.-Importance and function:...
in the province of Palermo
Province of Palermo
The Province of Palermo is a province in the autonomous region of Sicily, a major island in Southern Italy. Its capital is the city of Palermo. The Province of Palermo has 82 comuni , 1,239,272 inhabitants, and is 4,992 km² .-External links:...
, Sicily
Sicily
Sicily is a region of Italy, and is the largest island in the Mediterranean Sea. Along with the surrounding minor islands, it constitutes an autonomous region of Italy, the Regione Autonoma Siciliana Sicily has a rich and unique culture, especially with regard to the arts, music, literature,...
(southern Italy
Italy
Italy , officially the Italian Republic languages]] under the European Charter for Regional or Minority Languages. In each of these, Italy's official name is as follows:;;;;;;;;), is a unitary parliamentary republic in South-Central Europe. To the north it borders France, Switzerland, Austria and...
). It is especially famous for the castle which its name derives, and around which the city grew up in the 14th century.

Construction of the Castle began in 1316, by order of Count Francesco I of Ventimiglia
Ventimiglia
Ventimiglia is a city and comune in Liguria, northern Italy, in the province of Imperia. It is located southwest of Genoa by rail, and 7 km from the French-Italian border, on the Gulf of Genoa, having a small harbour at the mouth of the Roia River, which divides the town into two parts...
, over the ruins of the ancient Byzantine
Byzantine Empire
The Byzantine Empire was the Eastern Roman Empire during the periods of Late Antiquity and the Middle Ages, centred on the capital of Constantinople. Known simply as the Roman Empire or Romania to its inhabitants and neighbours, the Empire was the direct continuation of the Ancient Roman State...
town of Ypsigro, high on the San Pietro hill. Hence its original name, Castello del buon aere ("Castle of good air"), from which the name Castelbuono is derived - literally meaning "good castle".

Numerous drastic alterations were made in the 17th century for reasons of accommodation, when a number of Ventimiglia families moved here from Palermo - the castle never served any really strategic purpose, owing to its geographic position down valley.
The construction presents Arab-Norman and Swabian features: the cube shape recalls Arabic architecture; the square towers, although incorporated into those of the façade, reflect Norman architectural style, as also the battlements; and the round tower recalls aspects of Swabian architecture.

The city is home to one of Europe's oldest road running
Road running
Road running is the sport of running on a measured course over an established road . These events would be classified as long distance according to athletics terminology, with distances typically ranging from 5 kilometers to 42.2 kilometers in the marathon. They may involve large numbers of runners...
competitions: the Giro Podistico Internazionale Castelbuono was first held in the city in 1912 and is held annually.

The construction of the Castle mixes Arab-Norman features with others typical of the castles built during the Hohenstaufen
Hohenstaufen
The House of Hohenstaufen was a dynasty of German kings in the High Middle Ages, lasting from 1138 to 1254. Three of these kings were also crowned Holy Roman Emperor. In 1194 the Hohenstaufens also became Kings of Sicily...
rule of southern Italy: the cube
Cube
In geometry, a cube is a three-dimensional solid object bounded by six square faces, facets or sides, with three meeting at each vertex. The cube can also be called a regular hexahedron and is one of the five Platonic solids. It is a special kind of square prism, of rectangular parallelepiped and...
shape recalls Arabic architecture
Architecture
Architecture is both the process and product of planning, designing and construction. Architectural works, in the material form of buildings, are often perceived as cultural and political symbols and as works of art...
; the square towers, although incorporated into those of the façade, reflect Norman architectural style, as also the battlements; and the round tower recalls aspects of Frederick II's times architecture.

The structure is on three floors, the first floor for the servants, with the essential services, the second for the nobility, with the sumptuous Cappella Palatina, and the third for the court and for guests.

The Cappella Palatina ("Palace Chapel") was built in 1683 by the brothers Giuseppe and Giacomo Serpotta
Giacomo Serpotta
Giacomo Serpotta was an Italian sculptor, active in a Rococo style and mainly working in stucco.Serpotta was born and died in Palermo; and may have never left Sicily. His skill and facility with stucco sculpture appears to arise without mentorship or direct exposures to the mainstream of Italian...
, with a great profusion of precious marble, stuccowork, putti, and friezes that commemorate the most resplendent moments in the history of the House of Chiaramonte. Here is kept the holy relic
Relic
In religion, a relic is a part of the body of a saint or a venerated person, or else another type of ancient religious object, carefully preserved for purposes of veneration or as a tangible memorial...
of the skull of St Ann
St Ann
St Ann may refer to:*Saint Ann or Saint Anne, the mother of the Virgin Mary*Saint Ann Parish, Jamaica*St. Ann, Missouri-See also:*Church of St. Ann *Saint Anne *St Ann's *St Anne's...
, in an urn that acts as the pedestal to the sculpted bust of Castelbuono's patron saint
Patron saint
A patron saint is a saint who is regarded as the intercessor and advocate in heaven of a nation, place, craft, activity, class, clan, family, or person...
.

There are also the traditional underground dungeons and a tunnel that leads to the Church of San Francesco.

The church of Matrice Vecchia was built in the 15th century on the ruins of a pagan
Paganism
Paganism is a blanket term, typically used to refer to non-Abrahamic, indigenous polytheistic religious traditions....
temple. It has a Renaissance
Renaissance
The Renaissance was a cultural movement that spanned roughly the 14th to the 17th century, beginning in Italy in the Late Middle Ages and later spreading to the rest of Europe. The term is also used more loosely to refer to the historical era, but since the changes of the Renaissance were not...
portico added in the 16th century, and a central portal in the Catalan-Gothic style. On the left side is a bell-tower with a fine Romanesque mullioned window culminating in an octagonal spire covered with majoilica tiles. The interior of the church, originally divided into a nave and two aisles, received another aisle at the end of the 16th century. It preserves prized works, most remarkably, above the main altar, a splendid polyptych
Polyptych
A polyptych generally refers to a painting which is divided into sections, or panels. The terminology that follows is in relevance to the number of panels integrated into a particular piece of work: "diptych" describes a two-part work of art; "triptych" describes a three-part work; "tetraptych"...
depicting The Coronation of the Virgin , attributed to Pietro Ruzzolone or possibly Antonello de Saliba. On the bottom right is the unusual figure of a Saint wearing spectacles. On the right is a statue of the Madonna delle Grazie by Antonello Gagini
Antonello Gagini
Antonello Gagini was an Italian sculptor of the Renaissance, mainly active in Sicily and Calabria.Antonello was a member of a family of sculptors and artisans, originally from Northern Italy, but active throughout Italy, including Genoa, Florence, and Rome. The family includes his father, Domenico...
. Below the nave is a fresco depicting the Betrothal of the Virgins showing a strong Senese influence in the elegant features and the symmetry of the composition. Some of the columns separating the nave and the aisles are painted with frescoes, including the figure of St. Catherine of Alexandria.