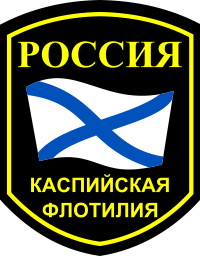 The Caspian Flotilla is the oldest Russian military flotilla
Flotilla
A flotilla , or naval flotilla, is a formation of small warships that may be part of a larger fleet. A flotilla is usually composed of a homogeneous group of the same class of warship, such as frigates, destroyers, torpedo boats, submarines, gunboats, or minesweepers...
, stationed in the Caspian Sea
Caspian Sea
The Caspian Sea is the largest enclosed body of water on Earth by area, variously classed as the world's largest lake or a full-fledged sea. The sea has a surface area of and a volume of...
. It was awarded the Order of the Red Banner
Order of the Red Banner
The Soviet government of Russia established the Order of the Red Banner , a military decoration, on September 16, 1918 during the Russian Civil War...
in 1945.

The Caspian Flotilla (CF) was created in November of 1722 in Astrakhan
Astrakhan
Astrakhan is a major city in southern European Russia and the administrative center of Astrakhan Oblast. The city lies on the left bank of the Volga River, close to where it discharges into the Caspian Sea at an altitude of below the sea level. Population:...
by the order of Peter the Great
Peter I of Russia
Peter the Great, Peter I or Pyotr Alexeyevich Romanov Dates indicated by the letters "O.S." are Old Style. All other dates in this article are New Style. ruled the Tsardom of Russia and later the Russian Empire from until his death, jointly ruling before 1696 with his half-brother, Ivan V...
. Led by the admiral Fyodor Apraksin, it participated in Peter's Persian campaign of 1722-1723 and the Russo-Persian War (1804-1813)
Russo-Persian War (1804-1813)
The 1804-1813 Russo-Persian War, one of the many wars between the Persian Empire and Imperial Russia, began like many wars as a territorial dispute. The Persian king, Fath Ali Shah Qajar, wanted to consolidate the northernmost reaches of his Qajar dynasty by securing land near the Caspian Sea's...
, assisting the Russian army in capturing Derbent
Derbent
Derbent |Lak]]: Чурул, Churul; Persian: دربند; Judæo-Tat: דארבּאנד/Дэрбэнд/Dərbənd) is a city in the Republic of Dagestan, Russia, close to the Azerbaijani border. It is the southernmost city in Russia, and it is the second most important city of Dagestan...
and Baku
Baku
Baku , sometimes spelled as Baki or Bakou, is the capital and largest city of Azerbaijan, as well as the largest city on the Caspian Sea and of the Caucasus region. It is located on the southern shore of the Absheron Peninsula, which projects into the Caspian Sea. The city consists of two principal...
during the Persian Expedition of 1796
Persian Expedition of 1796
The Persian Expedition of Catherine the Great, alongside the Persian Expedition of Peter the Great, was one of the Russo-Persian Wars of the 18th century which did not entail any lasting consequences for either belligerent....
. As a result of the Treaty of Gulistan of 1813, the CF remained the only military flotilla in the Caspian Sea. Baku became its main base
Military base
A military base is a facility directly owned and operated by or for the military or one of its branches that shelters military equipment and personnel, and facilitates training and operations. In general, a military base provides accommodations for one or more units, but it may also be used as a...
in 1867.

As the situation on the Caspian Sea stabilized in due course, the number of ships in the CF began to decrease. By the beginning of the 20th century, it had 2 gunboat
Gunboat
A gunboat is a naval watercraft designed for the express purpose of carrying one or more guns to bombard coastal targets, as opposed to those military craft designed for naval warfare, or for ferrying troops or supplies.-History:...
s and a few armed steamers
Steamboat
A steamboat or steamship, sometimes called a steamer, is a ship in which the primary method of propulsion is steam power, typically driving propellers or paddlewheels...
. The sailor
Sailor
A sailor, mariner, or seaman is a person who navigates water-borne vessels or assists in their operation, maintenance, or service. The term can apply to professional mariners, military personnel, and recreational sailors as well as a plethora of other uses...
s of the CF were actively engaged in the revolutionary
Revolutionary
A revolutionary is a person who either actively participates in, or advocates revolution. Also, when used as an adjective, the term revolutionary refers to something that has a major, sudden impact on society or on some aspect of human endeavor.-Definition:...
movement in Baku in 1903-1905 and establishment of the Soviet
Soviet Union
The Soviet Union , officially the Union of Soviet Socialist Republics , was a constitutionally socialist state that existed in Eurasia between 1922 and 1991....
authority in 1917 in that region. In order to provide assistance to the Red Army
Red Army
The Workers' and Peasants' Red Army started out as the Soviet Union's revolutionary communist combat groups during the Russian Civil War of 1918-1922. It grew into the national army of the Soviet Union. By the 1930s the Red Army was among the largest armies in history.The "Red Army" name refers to...
, they formed the Military Fleet of the Astrakhan Region (Военный флот Астраханского края, or Voyenniy flot Astrakhanskogo kraya) in April - June 1918, reinforced with torpedo boat
Torpedo boat
A torpedo boat is a relatively small and fast naval vessel designed to carry torpedoes into battle. The first designs rammed enemy ships with explosive spar torpedoes, and later designs launched self-propelled Whitehead torpedoes. They were created to counter battleships and other large, slow and...
s and submarine
Submarine
A submarine is a watercraft capable of independent operation below the surface of the water. It differs from a submersible, which has more limited underwater capability...
s from the Baltic Sea
Baltic Sea
The Baltic Sea is a brackish mediterranean sea located in Northern Europe, from 53°N to 66°N latitude and from 20°E to 26°E longitude. It is bounded by the Scandinavian Peninsula, the mainland of Europe, and the Danish islands. It drains into the Kattegat by way of the Øresund, the Great Belt and...
in the fall of 1918. On October 13, the Soviets renamed it to the Astrakhan-Caspian Military Flotilla
Astrakhan-Caspian Military Flotilla
The Astrakhan-Caspian Military Flotilla was formed by the Bolsheviks in October of 1918 for the purpose of defending the Lower Volga and northern parts of the Caspian Sea from the Volunteer Army...
(Астрахано-Каспийская военная флотилия, or Astrakhano-Kaspiyskaya voennaya flotiliya). The ships of the flotilla were captured by the counterrevolutionary
Counterrevolutionary
A counter-revolutionary is anyone who opposes a revolution, particularly those who act after a revolution to try to overturn or reverse it, in full or in part...
Centrocaspian government in August 1918 and later regained by the Soviets after the overthrow of the Musavat government.

In July 1919, the Astrakhan-Caspian Military Flotilla was combined with the Volga Military Flotilla (Волжская военная флотилия, or Volzhskaya voyennaya flotiliya) and renamed to the Volga-Caspian Military Flotilla (Волжско-Каспийская военная флотилия). On May 1, 1920, the Soviets established the Caspian Fleet
Naval fleet
A fleet, or naval fleet, is a large formation of warships, and the largest formation in any navy. A fleet at sea is the direct equivalent of an army on land....
, which comprised 3 auxiliary cruisers, 10 torpedo boats, 4 submarines and other ships. Together with the Caspian Fleet, there was the Red Fleet of the Soviet Azerbaijan
Azerbaijan
Azerbaijan , officially the Republic of Azerbaijan is the largest country in the Caucasus region of Eurasia. Located at the crossroads of Western Asia and Eastern Europe, it is bounded by the Caspian Sea to the east, Russia to the north, Georgia to the northwest, Armenia to the west, and Iran to...
, stationed in Baku, as well. Both fleets completed the conquest of the Caspian Sea from the White Army. In July 1920, Caspian and Azerbaijani fleets were combined into the Naval Forces of the Caspian Sea (Морские Силы Каспийского моря, or Morskiye Sily Kaspiyskogo morya) and would later be renamed to the Caspian Flotilla on June 27, 1931.

During the Great Patriotic War
Eastern Front (World War II)
The Eastern Front of World War II was a theatre of World War II between the European Axis powers and co-belligerent Finland against the Soviet Union, Poland, and some other Allies which encompassed Northern, Southern and Eastern Europe from 22 June 1941 to 9 May 1945...
of 1941-1945, the Caspian Flotilla secured vital sea shipping of army units, military equipment and different cargo, especially during the Battle of Stalingrad
Battle of Stalingrad
The Battle of Stalingrad was a major battle of World War II in which Nazi Germany and its allies fought the Soviet Union for control of the city of Stalingrad in southwestern Russia. The battle took place between 23 August 1942 and 2 February 1943...
and the battle for the Caucasus
Caucasus
The Caucasus, also Caucas or Caucasia , is a geopolitical region at the border of Europe and Asia, and situated between the Black and the Caspian sea...
.

During the Cold War
Cold War
The Cold War was the continuing state from roughly 1946 to 1991 of political conflict, military tension, proxy wars, and economic competition between the Communist World—primarily the Soviet Union and its satellite states and allies—and the powers of the Western world, primarily the United States...
the Caspian was used to test missile armed ekranoplanes.

The Flotilla has now dropped in numbers, and the Kazakh contingent was removed to serve as a basis for Kazakhstan's naval service. For several years Russia continued to lead a joint Turkmen
Military of Turkmenistan
The armed forces of Turkmenistan consist of an Army, Navy, Air and Air Defense Forces, Border Troops, and Internal Troops, and a National Guard. After the fall of the Soviet Union, significant elements of the Soviet Armed Forces Turkestan Military District remained on Turkmen soil...
-Russian force based at Astrakhan
Astrakhan
Astrakhan is a major city in southern European Russia and the administrative center of Astrakhan Oblast. The city lies on the left bank of the Volga River, close to where it discharges into the Caspian Sea at an altitude of below the sea level. Population:...
.

Also the flotilla has received one of new Buyan class
Buyan class corvette
The Buyan class corvette was designed by Zelenodolsk Design and designated Project 21630 by the Russian Government. This is the newest corvette of the Russian Navy. The first ship of her class, the Astrakhan was commissioned on January 2006, and assigned to the Caspian Flotilla.In Aug 2010 some...
stealth type river gun boats built by The St. Petersburg Almaz shipyard.

On 13 and 23 November 2009 there were two separate sets of explosions at the 31st Arsenal of the Caspian Sea Flotilla, an ammunition depot, in Ulyanovsk
Ulyanovsk
Ulyanovsk The city is the birthplace of Vladimir Lenin , for whom it is named.-History:Simbirsk was founded in 1648 by the boyar Bogdan Khitrovo. The fort of "Simbirsk" was strategically placed on a hill on the Western bank of the Volga River...
. Ten servicemen died. The depot is to be closed.