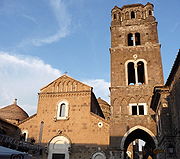 Casertavecchia, a frazione
Frazione
A frazione , in Italy, is the name given in administrative law to a type of territorial subdivision of a comune; for other administrative divisions, see municipio, circoscrizione, quartiere...
of Caserta
Caserta
Caserta is the capital of the province of Caserta in the Campania region of Italy. It is an important agricultural, commercial and industrial comune and city. Caserta is located on the edge of the Campanian plain at the foot of the Campanian Subapennine mountain range...
, is an Italian
Italy
Italy , officially the Italian Republic languages]] under the European Charter for Regional or Minority Languages. In each of these, Italy's official name is as follows:;;;;;;;;), is a unitary parliamentary republic in South-Central Europe. To the north it borders France, Switzerland, Austria and...
medieval village that lies at the foot of the Tifatini Mountains located 10 km north-east of the City of Caserta at an altitude of approximately 401 meters. Its name translated from Italian means "Old Caserta."

The origins of Casertavecchia are uncertain, but according to the Benedictine monk, Erchempert
Erchempert
Erchempert was a monk of Monte Cassino in the final quarter of the ninth century. He chronicled a history of Lombard Benevento, giving especially vivid account of the violence surrounding his monastic retreat in his own day. The work, Historia Langobardorum Beneventanorum, stops in the winter of...
, in Ystoriola Langobardorum Beneventi degentium, the village was founded in 861
861
Year 861 was a common year starting on Wednesday of the Julian calendar.- Europe :* Carloman revolts against his father Louis the German.* Michael III and Bardas invade Bulgaria....
AD. The previous Roman town was called "Casam Irtam" (from the Latin meaning "home village located above").

The village was initially conquered and ruled by the Lombards. Subsequent Saracen
Saracen
Saracen was a term used by the ancient Romans to refer to a people who lived in desert areas in and around the Roman province of Arabia, and who were distinguished from Arabs. In Europe during the Middle Ages the term was expanded to include Arabs, and then all who professed the religion of Islam...
depredations led to the fortified mountain village becoming the Bishopric
Diocese
A diocese is the district or see under the supervision of a bishop. It is divided into parishes.An archdiocese is more significant than a diocese. An archdiocese is presided over by an archbishop whose see may have or had importance due to size or historical significance...
for the province.

Under Norman domination, the village began the construction of its cathedral, dedicated to St. Michael the Archangel. During this period it was controlled by the Swabian
Swabian
Swabian may refer:* to the German region of Swabia ; or* to Swabian German, a dialect spoken in Baden-Württemberg in south-west Germany and adjoining areas See also:...
, Riccardo di Lauro (1232-1266), who increased the political power of the town.

The Aragons
Aragon
Aragon is a modern autonomous community in Spain, coextensive with the medieval Kingdom of Aragon. Located in northeastern Spain, the Aragonese autonomous community comprises three provinces : Huesca, Zaragoza, and Teruel. Its capital is Zaragoza...
conquered the village in 1442 which began its long and gradual decline in importance. Eventually, Casertavecchia would host only the local seminary and the Bishop's seat. Under the rule of the Bourbons, major construction began taking place in the city of Caserta
Caserta
Caserta is the capital of the province of Caserta in the Campania region of Italy. It is an important agricultural, commercial and industrial comune and city. Caserta is located on the edge of the Campanian plain at the foot of the Campanian Subapennine mountain range...
. By 1842 political rule had entirely moved to the great palace
Caserta Palace
The Royal Palace of Caserta is a former royal residence in Caserta, southern Italy, constructed for the Bourbon kings of Naples. It was the largest palace and one of the largest buildings erected in Europe during the 18th century...
in the larger city, with the Casertan diocese finally relocating from Casertavecchia to Caserta.

In 1960, Casertavecchia was designated an Italian National Monument.

Today, the village is primarily a tourist destination. Sites worth visiting consist of the church, its bell tower, and the remains of the original castle. Visitors can dine in local pizzerias with panoramic views of the surrounding countryside.