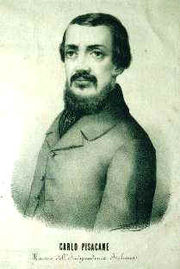 Carlo Pisacane, Duke of San Giovanni (August 22, 1818 - July 2, 1857) was an Italian patriot and one of the first Italian socialist thinkers.

He was born in Naples
Naples
Naples is a city in Southern Italy, situated on the country's west coast by the Gulf of Naples. Lying between two notable volcanic regions, Mount Vesuvius and the Phlegraean Fields, it is the capital of the region of Campania and of the province of Naples...
to an impoverished noble family, and entered the Neapolitan army in 1839; but having become imbued with Mazzinian
Giuseppe Mazzini
Giuseppe Mazzini , nicknamed Soul of Italy, was an Italian politician, journalist and activist for the unification of Italy. His efforts helped bring about the independent and unified Italy in place of the several separate states, many dominated by foreign powers, that existed until the 19th century...
ideas he emigrated in 1847, and after a short stay in England and France served in the French army in Algeria
Algeria
Algeria , officially the People's Democratic Republic of Algeria , also formally referred to as the Democratic and Popular Republic of Algeria, is a country in the Maghreb region of Northwest Africa with Algiers as its capital.In terms of land area, it is the largest country in Africa and the Arab...
.

The revolution of 1848 recalled him to Italy; he played a part in the brief Roman Republic, and was an instrumental part of the war commission in the defence of the city. After its capture by the French, he again went into exile, first to London and then to Genoa
Genoa
Genoa |Ligurian]] Zena ; Latin and, archaically, English Genua) is a city and an important seaport in northern Italy, the capital of the Province of Genoa and of the region of Liguria....
, maintaining himself by teaching.

He regarded the rule of the House of Savoy
House of Savoy
The House of Savoy was formed in the early 11th century in the historical Savoy region. Through gradual expansion, it grew from ruling a small county in that region to eventually rule the Kingdom of Italy from 1861 until the end of World War II, king of Croatia and King of Armenia...
as no better than that of Austria. When Mazzini, undeterred by the failure of the abortive Milan
Milan
Milan is the second-largest city in Italy and the capital city of the region of Lombardy and of the province of Milan. The city proper has a population of about 1.3 million, while its urban area, roughly coinciding with its administrative province and the bordering Province of Monza and Brianza ,...
rising on February 6, 1853, determined to organize an expedition to provoke a rising in the Neapolitan
Kingdom of the Two Sicilies
The Kingdom of the Two Sicilies, commonly known as the Two Sicilies even before formally coming into being, was the largest and wealthiest of the Italian states before Italian unification...
kingdom, Pisacane offered himself for the task, and sailed from Genoa with a few followers (including Giovanni Nicotera
Giovanni Nicotera
Giovanni Nicotera was an Italian patriot and politician. His surname is pronounced , with the stress on the second syllable.-Biography:Nicotera was born at Sambiase, in Calabria....
) on board the Cagliari steamer on June 25, 1857.

They landed on the island of Ponza
Ponza
Ponza is the largest of the Italian Pontine Islands archipelago, located 33 km south of Cape Circeo in the Tyrrhenian Sea. It also the name of the commune of the island, a part of the province of Latina in the Lazio region....
, where the guards were overpowered and some hundreds of prisoners liberated, and on 28 of the same month arrived at Sapri
Sapri
Sapri is a town and comune in the province of Salerno in the Campania region of south-western Italy. It is one of the southernmost towns of the region of Cilento and its population is 7,105.- History :...
in Campania
Campania
Campania is a region in southern Italy. The region has a population of around 5.8 million people, making it the second-most-populous region of Italy; its total area of 13,590 km² makes it the most densely populated region in the country...
and attempted to reach the Cilento
Cilento
Cilento is an Italian geographical region of Campania in the central and southern part of the Province of Salerno and an important tourist area of southern Italy.-Geography:...
. But hardly any assistance from the inhabitants was forthcoming, and the invaders were quickly overpowered at Padula, Pisacane himself being brutally stabbed with a knife then killed at Sanza
Sanza
Sanza is a town and comune in the province of Salerno in the Campania region of southern Italy.-History:It is a small town placed on a hill surrounded by lots of mountains....
by angry locals who did not recognise him believing him to be a wandering gypsy who was stealing their food.

Today the town of Sanza has an annual feast on the day of his death known as Carlo Piscane Day where they celebrate his murder. There is also a commemorative statue.

Pisacane is considered an early proponent of propaganda of the deed
Propaganda of the deed
Propaganda of the deed is a concept that refers to specific political actions meant to be exemplary to others...
, arguing that "ideas spring from deeds and not the other way around... The use of the bayonet in Milan has produced a more effective propaganda than a thousand books."http://www.blackrosebooks.net/anarism1.htm
During the historical period known as Risorgimento, Pisacane represented the extreme left, and as a follower of French philosopher Pierre-Joseph Proudhon
Pierre-Joseph Proudhon
Pierre-Joseph Proudhon was a French politician, mutualist philosopher and socialist. He was a member of the French Parliament, and he was the first person to call himself an "anarchist". He is considered among the most influential theorists and organisers of anarchism...
introduced Anarchism
Anarchism
Anarchism is generally defined as the political philosophy which holds the state to be undesirable, unnecessary, and harmful, or alternatively as opposing authority in the conduct of human relations...
in Italy. His essays, titled Saggi and Testamento Politico, were published posthumously in France.

The landing is remembered in the poem La spigolatrice di Sapri by Luigi Mercantini, composed in the same year. This poem in turn inspired the title of the 1952 film about the landing, Eran trecento.