Encyclopedia
The Carl von Ossietzky University of Oldenburg is a university
University
A university is an institution of higher education and research, which grants academic degrees in a variety of subjects. A university is an organisation that provides both undergraduate education and postgraduate education...
in Oldenburg
Oldenburg
Oldenburg is an independent city in Lower Saxony, Germany. It is situated in the western part of the state between the cities of Bremen and Groningen, Netherlands, at the Hunte river. It has a population of 160,279 which makes it the fourth biggest city in Lower Saxony after Hanover, Braunschweig...
, Germany
Germany
Germany , officially the Federal Republic of Germany , is a federal parliamentary republic in Europe. The country consists of 16 states while the capital and largest city is Berlin. Germany covers an area of 357,021 km2 and has a largely temperate seasonal climate...
. It is one of the most important educational facilities in northwestern Germany and specialises in interdisciplinary studies.

The university was founded in 1973 building on a school for the training of teachers that had existed since 1945. In the summer semester of 1974, the university introduced an education curriculum with 2400 students. In 1991 it was named after the writer and Nobel laureate Carl von Ossietzky
Carl von Ossietzky
Carl von Ossietzky was a German pacifist and the recipient of the 1935 Nobel Peace Prize. He was convicted of high treason and espionage in 1931 after publishing details of Germany's alleged violation of the Treaty of Versailles by rebuilding an air force, the predecessor of the Luftwaffe, and...
. It crossed the number of 10,000 students in 1991, a number that it has since maintained, and as of 2006, there were about 12,000 students. As part of the Bologna process
Bologna process
The purpose of the Bologna Process is the creation of the European Higher Education Area by making academic degree standards and quality assurance standards more comparable and compatible throughout Europe, in particular under the Lisbon Recognition Convention...
, the university changed its courses to Bachelor-Master degrees in 2004. 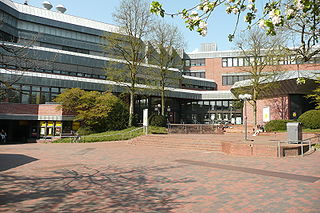 The university offers over 80 courses of study. 75 percent of students seek a Diplom
Diplom
A Diplom is an academic degree in the German-speaking countries Germany, Austria, and Switzerland and a similarly named degree in some other European countries including Belarus, Bosnia and Herzegovina, Croatia, Estonia, Finland , Greece, Hungary, Russia, Serbia, Macedonia, Slovenia, and Ukraine...
, Magister
Magister
Magister is Latin for "master" or "teacher." It may refer to:* The Magister , an academic degreePositions or titles* A magister equitum, or Master of the Horse...
, while 25 percent strive for a teaching certification. One main focus of the university is the schooling of teachers, which was established during the 1970s and remains a strong profile. The campus is split into two locations, the major one being Uhlhornsweg, where the main library, the mensa and the administration along with most of the departments is housed, while Wechloy is home to the studies of natural sciences as well as the library of natural sciences.

The Studentenwerk of the University organizes the cultural bureau UNICUM and the theatre since 1985. UNICUM includes theatrical groups from the university as well as freelancers. The group Gegenlicht runs a cinema in the Old Aula and on campus during the summer, while the programme zwergWERK is focused on the presentation of short films.

The university participates in the ERASMUS programme
Erasmus programme
The Erasmus Programme , a.k.a. Erasmus Project is a European Union student exchange programme established in 1987...
, a partnership for student exchanges in Europe. It maintains relations with over 50 universities on all continents .

Universities that have an exchange programme with the University of Oldenburg include: