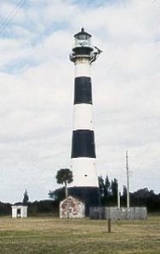 Encyclopedia
The Cape Canaveral Light is a historic lighthouse
Lighthouse
A lighthouse is a tower, building, or other type of structure designed to emit light from a system of lamps and lenses or, in older times, from a fire, and used as an aid to navigation for maritime pilots at sea or on inland waterways....
on the east coast of the U.S. state of Florida
Florida
Florida is a state in the southeastern United States, located on the nation's Atlantic and Gulf coasts. It is bordered to the west by the Gulf of Mexico, to the north by Alabama and Georgia and to the east by the Atlantic Ocean. With a population of 18,801,310 as measured by the 2010 census, it...
.

The current Cape Canaveral Light is not the first lighthouse on Cape Canaveral
Cape Canaveral
Cape Canaveral, from the Spanish Cabo Cañaveral, is a headland in Brevard County, Florida, United States, near the center of the state's Atlantic coast. Known as Cape Kennedy from 1963 to 1973, it lies east of Merritt Island, separated from it by the Banana River.It is part of a region known as the...
. A 60-foot (18 m) tall brick structure was built on the Cape in 1848. The light consisted of 15 lamps each with a 21-inch (530 mm) reflector. The first lighthouse keeper left the lighthouse during a Seminole War scare, and refused to return to his post. Sailors heavily criticized the lighthouse, with complaints that the light was too weak and too low to be seen before ships were on the reefs near the Cape. the government contracted for construction of a new lighthouse in 1860, but the start of the American Civil War
American Civil War
The American Civil War was a civil war fought in the United States of America. In response to the election of Abraham Lincoln as President of the United States, 11 southern slave states declared their secession from the United States and formed the Confederate States of America ; the other 25...
stopped work. The lamps and mechanism for the light were removed from the lighthouse and buried in the lighthouse keeper's orange grove to protect them from Federal raids.
At the end of the war construction resumed on the lighthouse. It was completed in 1868, receiving a first-order Fresnel lens
Fresnel lens
A Fresnel lens is a type of lens originally developed by French physicist Augustin-Jean Fresnel for lighthouses.The design allows the construction of lenses of large aperture and short focal length without the mass and volume of material that would be required by a lens of conventional design...
. Erosion of the shoreline threatened the lighthouse, and the United States Congress
United States Congress
The United States Congress is the bicameral legislature of the federal government of the United States, consisting of the Senate and the House of Representatives. The Congress meets in the United States Capitol in Washington, D.C....
appropriated funds to move the lighthouse inland. The old (1848) was blown up and the rubble used to prepare a foundation of the lighthouse. The cast-iron tower was disassembled, moved and reassembled at the new location. The move took 18 months, and the lighthouse was re-lit at its new location in 1894.

When rockets began launching from the Cape in the early 1950s, all residents except the lighthouse keeper were relocated to other areas. In 1954, the need for a keeper to live nearby was eliminated by automating the light. Soon after, the keeper's homes were demolished. After it was discovered that strong vibrations that accompany launches were damaging the first-order Fresnel lens, it was removed in 1993 and placed on display in a museum at the Ponce de Leon Inlet Light
Ponce de Leon Inlet Light
The Ponce de Leon Inlet Light is a lighthouse and museum located at Ponce de León Inlet in Central Florida. At in height, it is the tallest lighthouse in the state and one of the tallest in the United States . It is located between St. Augustine Light and Cape Canaveral Light...
. Since toxic lead paint was used to paint the lighthouse, in 1995, a restoration project began to sand blast the harmful paint off.

In 2003, the oil house was restored to its original (1890s) state (strong winds had damaged the roof in the 1970s and a window was added in the early 1900s). In 2006, another project restored the lantern room and the structure was repainted using modern materials. Ground sample tests, however, still show a very high level of lead in the soil around the tower. As a result, visitors are not allowed within fifty yards of the base until it is cleaned up.

The Cape Canaveral Lighthouse Foundation and volunteers are instrumental in restoration projects and in interpreting the lighthouse history. The Foundation has a website at http://www.CanaveralLight.org.