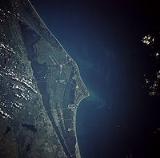 Overview
Cape Canaveral, from the Spanish
Spanish language
Spanish , also known as Castilian , is a Romance language in the Ibero-Romance group that evolved from several languages and dialects in central-northern Iberia around the 9th century and gradually spread with the expansion of the Kingdom of Castile into central and southern Iberia during the...
Cabo Cañaveral, is a headland
Headland
A headland is a point of land, usually high and often with a sheer drop, that extends out into a body of water.Headland can also refer to:*Headlands and bays*headLand, an Australian television series...
in Brevard County, Florida
Brevard County, Florida
Brevard County is a county located in the U.S. state of Florida, along the coast of the Atlantic Ocean. As of 2007 U.S. Census Bureau estimates, the population is 536,521, making it the 10th most populous county in the state. Influenced by the presence of the John F. Kennedy Space Center, Brevard...
, United States
United States
The United States of America is a federal constitutional republic comprising fifty states and a federal district...
, near the center of the state's Atlantic
Atlantic Ocean
The Atlantic Ocean is the second-largest of the world's oceanic divisions. With a total area of about , it covers approximately 20% of the Earth's surface and about 26% of its water surface area...
coast. Known as Cape Kennedy from 1963 to 1973, it lies east of Merritt Island, separated from it by the Banana River
Banana River
The Banana River is a lagoon that lies between Cape Canaveral and Merritt Island in Brevard County, Florida in the United States. It is part of the Indian River Lagoon system, and connects at its south end to the Indian River; it is the only part of the lagoon system not in the Intracoastal...
.

How did it get its name?

Is it true that it is also referred to as the Cape of Currents?

Were there various other name changes it went through?

What is the historical importance of the name given to Cape Canaveral?

When was the first rocket launched from the cape?
More
x