Calhoun is located at 34°30′0"N 84°56′33"W (34.499898, -84.942584), along the Oostanaula River
Oostanaula River
The Oostanaula River is a principal tributary of the Coosa River, about long, in northwestern Georgia in the United States. Via the Coosa and Alabama rivers, it is part of the watershed of the Mobile River, which flows to the Gulf of Mexico. Its name is said to come from a Cherokee Indian term...
.
According to the United States Census Bureau
United States Census Bureau
The United States Census Bureau is the government agency that is responsible for the United States Census. It also gathers other national demographic and economic data...
, the city has a total area of 11.7 square miles (30.3 km²), of which 11.6 square miles (30 km²) is land and 0.04 square mile (0.1035995244 km²) (0.17%) is water.
Calhoun is located along U.S. Interstate 75
Interstate 75
Interstate 75 is a major north–south Interstate Highway in the Great Lakes and Southeastern regions of the United States. It travels from State Road 826 and State Road 924 in Hialeah, Florida to Sault Ste. Marie, Michigan, at the Ontario, Canada, border...
, approximately 70 miles (112.7 km) north of Atlanta, and 50 miles (80.5 km) south of Chattanooga, Tennessee
Chattanooga, Tennessee
Chattanooga is the fourth-largest city in the US state of Tennessee , with a population of 169,887. It is the seat of Hamilton County...
.

Calhoun was a part of the Cherokee Nation
Cherokee
The Cherokee are a Native American people historically settled in the Southeastern United States . Linguistically, they are part of the Iroquoian language family...
(including New Echota
New Echota
New Echota was the capital of the Cherokee Nation prior to their forced removal in the 1830s. New Echota is 3.68 miles north of present-day Calhoun, Georgia, and south of Resaca, Georgia. The site is a state park and an historic site....
, capital of the Cherokee Nation) until December 29, 1835. When the Cherokees refused to give up their lands, the U.S. Army was sent by President Jackson
Andrew Jackson
Andrew Jackson was the seventh President of the United States . Based in frontier Tennessee, Jackson was a politician and army general who defeated the Creek Indians at the Battle of Horseshoe Bend , and the British at the Battle of New Orleans...
to the northern region of Georgia
Georgia (U.S. state)
Georgia is a state located in the southeastern United States. It was established in 1732, the last of the original Thirteen Colonies. The state is named after King George II of Great Britain. Georgia was the fourth state to ratify the United States Constitution, on January 2, 1788...
to force them to move to Oklahoma
Oklahoma
Oklahoma is a state located in the South Central region of the United States of America. With an estimated 3,751,351 residents as of the 2010 census and a land area of 68,667 square miles , Oklahoma is the 28th most populous and 20th-largest state...
(see more information on Trail of Tears
Trail of Tears
The Trail of Tears is a name given to the forced relocation and movement of Native American nations from southeastern parts of the United States following the Indian Removal Act of 1830...
).

After the Cherokees left their lands, Georgia claimed the Cherokee lands that became Gordon County
Gordon County, Georgia
Gordon County is a county located in the U.S. state of Georgia. As of 2000, the population was 44,104. The 2007 Census Estimate shows a population of 52,044. The county seat is Calhoun.- History :...
and other counties. A small town called Dawsonville was created and founded in the Gordon County, named for the owner of an early general store. Dawsonville was later renamed Calhoun to honor U.S. Senator John C. Calhoun
John C. Calhoun
John Caldwell Calhoun was a leading politician and political theorist from South Carolina during the first half of the 19th century. Calhoun eloquently spoke out on every issue of his day, but often changed positions. Calhoun began his political career as a nationalist, modernizer, and proponent...
, following his death in 1850.

Gordon County's inferior court called an election to allow the voters to choose between a site on the Western & Atlantic Railroad (involving Adairsville) or a site more centrally located within the county instead of designating the location of the county seat
County seat
A county seat is an administrative center, or seat of government, for a county or civil parish. The term is primarily used in the United States....
unlike other counties. Voters chose a site along the railroad, so the inferior court designated Calhoun as county seat in 1851. The legislature incorporated Calhoun in an act approved on January 12, 1852 (See Ga. Laws 1851-52, page 419 as an evidence). 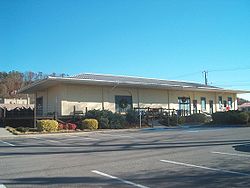 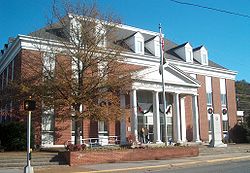 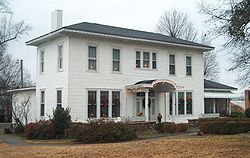 As of the census
Census
A census is the procedure of systematically acquiring and recording information about the members of a given population. It is a regularly occurring and official count of a particular population. The term is used mostly in connection with national population and housing censuses; other common...
of 2000, there were 10,667 people, 4,049 households, and 2,672 families residing in the city. The population density
Population density
Population density is a measurement of population per unit area or unit volume. It is frequently applied to living organisms, and particularly to humans...
was 915.4 inhabitants per square mile (353.5/km²). There were 4,298 housing units at an average density of 368.8 per square mile (142.4/km²). The racial makeup of the city was 77.91% White, 7.56% African American, 0.42% Native American, 1.00% Asian, 0.14% Pacific Islander, 11.61% from other races
Race (United States Census)
Race and ethnicity in the United States Census, as defined by the Federal Office of Management and Budget and the United States Census Bureau, are self-identification data items in which residents choose the race or races with which they most closely identify, and indicate whether or not they are...
, and 1.36% from two or more races. 17.07% of the population was Hispanic or Latino of any race.

There were 4,049 households out of which 30.9% had children under the age of 18 living with them, 47.8% were married couples
Marriage
Marriage is a social union or legal contract between people that creates kinship. It is an institution in which interpersonal relationships, usually intimate and sexual, are acknowledged in a variety of ways, depending on the culture or subculture in which it is found...
living together, 13.9% had a female householder with no husband present, and 34.0% were non-families. 28.8% of all households were made up of individuals and 12.0% had someone living alone who was 65 years of age or older. The average household size was 2.56 and the average family size was 3.07.

The median income for a household in the city was $33,618, and the median income for a family was $42,310. Males had a median income of $27,616 versus $25,018 for females. The per capita income
Per capita income
Per capita income or income per person is a measure of mean income within an economic aggregate, such as a country or city. It is calculated by taking a measure of all sources of income in the aggregate and dividing it by the total population...
for the city was $19,887. About 12.5% of families and 16.8% of the population were below the poverty line, including 20.8% of those under age 18 and 19.1% of those age 65 or over.


There is also a semi-weekly newspaper, The Calhoun Times