The cabin of Peter the Great (Russian
Russian language
Russian is a Slavic language used primarily in Russia, Belarus, Uzbekistan, Kazakhstan, Tajikistan and Kyrgyzstan. It is an unofficial but widely spoken language in Ukraine, Moldova, Latvia, Turkmenistan and Estonia and, to a lesser extent, the other countries that were once constituent republics...
: Domik Petra I or Domik Petra Pervogo or Domik Petra Velikogo) is a small wooden house which was the first St Petersburg "palace" of Tsar Peter the Great.

The log cabin
Log cabin
A log cabin is a house built from logs. It is a fairly simple type of log house. A distinction should be drawn between the traditional meanings of "log cabin" and "log house." Historically most "Log cabins" were a simple one- or 1½-story structures, somewhat impermanent, and less finished or less...
was constructed in three days in May 1703, by soldiers of the Semyonovskiy Regiment. At that time, the new St Petersburg was described as "a heap of villages linked together, like some plantation in the West Indies". The date of its construction is now considered to mark the foundation of the city.

The design is a combination of an izba
Izba
An izba is a traditional Russian countryside dwelling. A type of log house, it forms the living quarters of a conventional Russian farmstead. It is generally built close to the road and inside a yard, which also encloses a kitchen garden, hayshed, and barn within a simple woven stick fence...
, a traditional Russian countryside house typical of the 17th century, and the Tsar's beloved Dutch Baroque
Baroque
The Baroque is a period and the style that used exaggerated motion and clear, easily interpreted detail to produce drama, tension, exuberance, and grandeur in sculpture, painting, literature, dance, and music...
, later to evolve into the Petrine Baroque
Petrine Baroque
Petrine Baroque is a name applied by art historians to a style of Baroque architecture and decoration favoured by Peter the Great and employed to design buildings in the newly-founded Russian capital, Saint Petersburg, under this monarch and his immediate successors.Unlike contemporaneous Naryshkin...
. Peter built similar domiki elsewhere in Russia - for example, in Voronezh
Voronezh
Voronezh is a city in southwestern Russia, the administrative center of Voronezh Oblast. It is located on both sides of the Voronezh River, away from where it flows into the Don. It is an operating center of the Southeastern Railway , as well as the center of the Don Highway...
, and Vologda
Vologda
Vologda is a city and the administrative, cultural, and scientific center of Vologda Oblast, Russia, located on the Vologda River. The city is a major transport knot of the Northwest of Russia. Vologda is among the Russian cities possessing an especially valuable historical heritage...
. The wooden cabin in St Petersburg covers only 60 square metre and contains three rooms - living room, bedroom, and study. It has large ornate windows and a high hipped roof of wooden tiles. Inside, the wooden walls were painted with red oil to resemble brick, and the rooms came to be known as the "red chambers" (krasnyie khoromsty). There are no fires or chimneys, as it was intended to be used only in the warmer summer months. It was occupied by the Tsar between 1703 and 1708, while Peter supervised the construction of the new imperial city and the Peter and Paul Fortress
Peter and Paul Fortress
The Peter and Paul Fortress is the original citadel of St. Petersburg, Russia, founded by Peter the Great in 1703 and built to Domenico Trezzini's designs from 1706-1740.-History:...
. 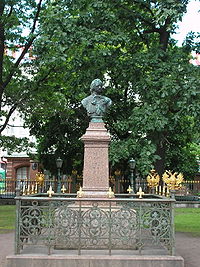 The cabin was moved to its present location, 6 Petrovskaia Naberezhnaia, in 1711 from its original site on the north bank of the River Neva close to the present Winter Palace
Winter Palace
The Winter Palace in Saint Petersburg, Russia, was, from 1732 to 1917, the official residence of the Russian monarchs. Situated between the Palace Embankment and the Palace Square, adjacent to the site of Peter the Great's original Winter Palace, the present and fourth Winter Palace was built and...
. Peter had it encased for its protection within a red brick pavilion in 1723, and ordered that it be preserved for posterity as a memorial to his modesty, and the creation of St Petersburg ex nihilo
Ex nihilo
Ex nihilo is a Latin phrase meaning "out of nothing". It often appears in conjunction with the concept of creation, as in creatio ex nihilo, meaning "creation out of nothing"—chiefly in philosophical or theological contexts, but also occurs in other fields.In theology, the common phrase creatio ex...
. Catherine the Great ordered the shelter for the cabin to be renovated in 1784, and the protective brick pavilion was reconstructed by Nicholas I
Nicholas I of Russia
Nicholas I , was the Emperor of Russia from 1825 until 1855, known as one of the most reactionary of the Russian monarchs. On the eve of his death, the Russian Empire reached its historical zenith spanning over 20 million square kilometers...
in the 1840s. Nicholas I also had the bedroom converted into a chapel dedicated to Christ the Redeemer, and iron railings were added in 1874.

Peter's domiki were used to mark significant dates, such as the bicentenary
Anniversary
An anniversary is a day that commemorates or celebrates a past event that occurred on the same day of the year as the initial event. For example, the first event is the initial occurrence or, if planned, the inaugural of the event. One year later would be the first anniversary of that event...
of Peter's birth in 1872. They became a centre of devotion to the tsar
Tsar
Tsar is a title used to designate certain European Slavic monarchs or supreme rulers. As a system of government in the Tsardom of Russia and Russian Empire, it is known as Tsarist autocracy, or Tsarism...
, the Russian Orthodox Church
Russian Orthodox Church
The Russian Orthodox Church or, alternatively, the Moscow Patriarchate The ROC is often said to be the largest of the Eastern Orthodox churches in the world; including all the autocephalous churches under its umbrella, its adherents number over 150 million worldwide—about half of the 300 million...
, and the Russian motherland (rodina
Rodina
Rodina or Motherland-National Patriotic Union was one of the four parties that controlled seats in the Russian legislature in 2003-2007...
). An image of the log cabin was included on the Peter the Great
Peter the Great (Fabergé egg)
Peter, the Great Egg, is a jewelled Easter egg made under the supervision of the Russian jeweler Peter Carl Fabergé in 1903, for the last Tsar of Russia, Nicholas II. Tsar Nicholas presented the egg to his wife, the Czarina Alexandra Fyodorovna...
Fabergé egg
Fabergé egg
A Fabergé egg is any one of the thousands of jeweled eggs made by the House of Fabergé from 1885 to 1917. Most were miniature eggs that were popular gifts at Eastertide...
, created in 1903 to celebrate the bicentenary of the founding of St Petersburg. After the Russian Revolution, they became symbols of Russian heroic labour.

A prized national monument, the contents were removed, and the Cabin was boarded up and camouflage
Camouflage
Camouflage is a method of concealment that allows an otherwise visible animal, military vehicle, or other object to remain unnoticed, by blending with its environment. Examples include a leopard's spotted coat, the battledress of a modern soldier and a leaf-mimic butterfly...
d during the Second World War. It was the first St Petersburg museum
Museum
A museum is an institution that cares for a collection of artifacts and other objects of scientific, artistic, cultural, or historical importance and makes them available for public viewing through exhibits that may be permanent or temporary. Most large museums are located in major cities...
to reopen in September 1944, after the end of the Siege of Leningrad
Siege of Leningrad
The Siege of Leningrad, also known as the Leningrad Blockade was a prolonged military operation resulting from the failure of the German Army Group North to capture Leningrad, now known as Saint Petersburg, in the Eastern Front theatre of World War II. It started on 8 September 1941, when the last...
. Personal and domestic objects owned and used by Peter are still displayed within, and a bust of Peter by Parmen Zabello stands outside. The cabin is open to the public.
The source of this article is wikipedia, the free encyclopedia.  The text of this article is licensed under the GFDL.