Encyclopedia
Business casual is a popular dress code in professional and white-collar
White-collar worker
The term white-collar worker refers to a person who performs professional, managerial, or administrative work, in contrast with a blue-collar worker, whose job requires manual labor...
workplaces in Western countries
Western world
The Western world, also known as the West and the Occident , is a term referring to the countries of Western Europe , the countries of the Americas, as well all countries of Northern and Central Europe, Australia and New Zealand...
. In the United States, 43% of non-self-employed workers commonly wear casual business attire. Casual street wear is the next most common work attire (28%), closely followed by uniforms (19%). Only a minority (9%) of workers wear formal business attire.

Business casual has partially supplanted business formal attire wear (suits
Suit (clothing)
In clothing, a suit is a set of garments made from the same cloth, consisting of at least a jacket and trousers. Lounge suits are the most common style of Western suit, originating in the United Kingdom as country wear...
and neckties, sometimes called international standard business attire), which was previously the standard apparel for managers and professionals.

Jeans
Jeans
Jeans are trousers made from denim. Some of the earliest American blue jeans were made by Jacob Davis, Calvin Rogers, and Levi Strauss in 1873. Starting in the 1950s, jeans, originally designed for cowboys, became popular among teenagers. Historic brands include Levi's, Lee, and Wrangler...
are sometimes acceptable in workplaces as part of business casual attire. Some Silicon Valley entrepreneurs such as Steve Jobs
Steve Jobs
Steven Paul Jobs was an American businessman and inventor widely recognized as a charismatic pioneer of the personal computer revolution. He was co-founder, chairman, and chief executive officer of Apple Inc...
were known to wear jeans as part of the business casual look, while in other companies blue jeans are not considered suitable for managers or even business casual. In academic, research and office settings, however, jeans may be worn with a polo shirt or dress shirt. The second-from-the-top button may also be opened in addition to the very top button. The most notable exception to this is the banking world, in which formal dress is often required.

Neckties and cufflinks are generally not required for business casual dress. Of the 33% of men who wear a necktie to work, 60% wear a necktie occasionally, while only 18% wear them all the time. 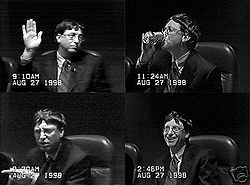 Compared to the dress code of many blue-collar and service workers, business casual dress is not a uniform
Uniform
A uniform is a set of standard clothing worn by members of an organization while participating in that organization's activity. Modern uniforms are worn by armed forces and paramilitary organizations such as police, emergency services, security guards, in some workplaces and schools and by inmates...
. In contrast to business informal
Informal attire
Informal attire, also called international business attire or Western business attire is a dress code, typified by a suit and necktie, for men. On the scale of formality, informal attire is more formal than casual but less formal than semi-formal. It is more presentational than semi-casual, but...
, there is no generally accepted definition of business casual wear. The interpretation of business casual differs widely among organizations and is often a cause of confusion.

An employment counseling office at an American university defines business casual dress as a middle ground between business formal wear and casual wear. The following are examples of appropriate workplace apparel from some organizations with a business-casual dress code: