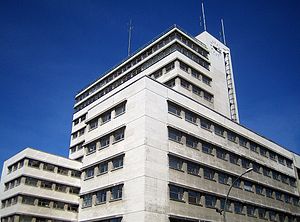 Bruno Paul was a German
Germany
Germany , officially the Federal Republic of Germany , is a federal parliamentary republic in Europe. The country consists of 16 states while the capital and largest city is Berlin. Germany covers an area of 357,021 km2 and has a largely temperate seasonal climate...
architect
Architect
An architect is a person trained in the planning, design and oversight of the construction of buildings. To practice architecture means to offer or render services in connection with the design and construction of a building, or group of buildings and the space within the site surrounding the...
, illustrator, interior designer, and furniture designer.

Bruno Paul was born in Seifhennersdorf
Seifhennersdorf
Seifhennersdorf is a town in the district Görlitz, in the Free State of Saxony, Germany. It is situated on the border with the Czech Republic, and the Czech towns of Rumburk and Varnsdorf lie across the border to the north-east and south of town....
, a village in rural Saxony
Saxony
The Free State of Saxony is a landlocked state of Germany, contingent with Brandenburg, Saxony Anhalt, Thuringia, Bavaria, the Czech Republic and Poland. It is the tenth-largest German state in area, with of Germany's sixteen states....
, in 1874. His father was an independent tradesman, craftsman, and dealer in building materials. When he was twelve years old Paul left Seifhennersdorf for Dresden
Dresden
Dresden is the capital city of the Free State of Saxony in Germany. It is situated in a valley on the River Elbe, near the Czech border. The Dresden conurbation is part of the Saxon Triangle metropolitan area....
, where he briefly attended Gymnasium before entering a teacher’s training school. By 1892 he was determined to pursue a career in the arts. In 1893 he was accepted as a student at the Saxon Academy of Fine Arts.

In 1894 Paul moved to Munich
Munich
Munich The city's motto is "" . Before 2006, it was "Weltstadt mit Herz" . Its native name, , is derived from the Old High German Munichen, meaning "by the monks' place". The city's name derives from the monks of the Benedictine order who founded the city; hence the monk depicted on the city's coat...
, then the artistic capital of Wilhelmine Germany. He enrolled at the Munich Academy as a student of the painter Paul Höcker, one of the founding members of the Munich Secession. Höcker provided Paul’s introduction to the city’s circle of progressive artists, which included his classmates Reinhold Max Eichler, Max Feldbauer
Max Feldbauer
Max Feldbauer was a German artist.He was born in Neumarkt in der Oberpfalz and died in Münchshöfen.In 1928 he won a bronze medal in the art competitions of the Olympic Games for his "Mailcoach"....
, Walter Georgi, Angelo Jank, Walter Püttner, Leo Putz, Ferdinand von Rezniçek
Ferdinand von Reznicek
Ferdinand Freiherr von Rezniček was an Austrian painter, caricaturist, and illustrator. Born to a noble Austrian family of Czech descent, he was a half-brother of composer Emil Nikolaus von Rezniček.His father had been a military officer, and Rezniček became a cavalry officer before following his...
and Walter Schulz
Walter Schulz
Walter Schulz was a German philosopher.Schulz studied Classial Philology, Philosophy and Protestant Theology at the University of Marburg, University of Breslau and University of Leipzig.After being seriously wounded as a soldier in World War II, Schulz received a doctorate in 1944 Hans-Georg...
. In 1896, Paul left the Academy to begin an independent career. After working briefly as a studio painter, he won lasting renown as an illustrator. He was a regular contributor to Jugend, the magazine from which the Jugendstil, the German counterpart to the French and Belgian Art Nouveau
Art Nouveau
Art Nouveau is an international philosophy and style of art, architecture and applied art—especially the decorative arts—that were most popular during 1890–1910. The name "Art Nouveau" is French for "new art"...
, derived its name. The leading figures of this movement, including Peter Behrens
Peter Behrens
Peter Behrens was a German architect and designer. He was important for the modernist movement, as several of the movements leading names worked for him when they were young.-Biography:Behrens attended the Christianeum Hamburg from September 1877 until Easter 1882...
, Bernhard Pankok, and Richard Riemerschmid
Richard Riemerschmid
Richard Riemerschmid was a German architect, painter, designer and city planner from Munich. He was a major figure in Jugendstil, the German form of Art Nouveau, and a founder of architecture in the style...
, as well as the majority of the founding members of the Munich Secession, all provided illustrations to Jugend. After 1897 Paul joined the staff of the satirical magazine Simplicissimus
Simplicissimus
Simplicissimus was a satirical German weekly magazine started by Albert Langen in April 1896 and published through 1967, with a hiatus from 1944-1954. It became a biweekly in 1964...
. Paul's weekly contributions to Simplicissimus between 1897 and 1906 won him international acclaim.

In 1898 Paul, together with Behrens, Pankok, and Riemerschmid, was working as an applied artist. He was a leading figure in the development of the Jugendstil, and quickly established himself as the premier designer for the Vereinigte Werkstätten für Kunst im Handwerk, a maker of artistic housewares in Munich. The Jugendstil Hunter’s Room he designed for the Vereinigte Werkstätten in 1900 received a gold medal at the Paris International Exposition and was the first of a series of prestigious commissions that won widespread professional admiration. He won another gold medal at the 1904 Louisiana Purchase Exposition in St. Louis, introducing his interior designs to a broad American audience. In 1906 Paul designed a festival decoration for a barracks in Munich, his first commission on an architectural scale. His design apparently (and perhaps apocryphally) impressed Kaiser Wilhelm II
William II, German Emperor
Wilhelm II was the last German Emperor and King of Prussia, ruling the German Empire and the Kingdom of Prussia from 15 June 1888 to 9 November 1918. He was a grandson of the British Queen Victoria and related to many monarchs and princes of Europe...
and facilitated his appointment to the vacant directorship of the Unterrichtsanstalt des königlichen Kunstgewerbe-Museums (educational institution of the royal museum of applied arts) in Berlin, an institution generally analogous to the South Kensington (later, Victoria and Albert) Museum in London or to the Art Institute in Chicago.

Paul’s appointment in Berlin was integral to the program of educational reforms promoted by Hermann Muthesius
Hermann Muthesius
Adam Gottlieb Hermann Muthesius , known as Hermann Muthesius, was a German architect, author and diplomat, perhaps best known for promoting many of the ideas of the English Arts and Crafts movement within Germany and for his subsequent influence on early pioneers of German architectural modernism...
and Wilhelm von Bode
Wilhelm von Bode
Wilhelm von Bode was a German art historian and curator. Born Arnold William Bode in Calvörde, he was ennobled in 1913...
. Paul, who was a member of the Munich Secession and the Berlin Secession
Berlin Secession
The Berlin Secession was an art association founded by Berlin artists in 1898 as an alternative to the conservative state-run Association of Berlin Artists. That year the official salon jury rejected a landscape by Walter Leistikow, who was a key figure amongst a group of young artists interested...
as well as being one of the twelve artists who founded the German Werkbund, proved a committed reformer. He revised the curriculum of the Unterrichtsanstalt to promote practical craftsmanship as the basis of artistic education. He emphasized the training of professional designers for the applied arts industries, establishing a precedent that continues in schools of design to the present day.

Paul implemented the full scope of his program of reforms in 1924, when the Unterrichtsanstalt was merged with the art school of the Prussian Academy. The new institution, the Vereinigte Staatsschulen für freie und angewandete Kunst (united state schools for fine and applied art), provided a coherent educational program that encompassed every technical and creative aspect of artistic endeavor. Until Paul was removed from the directorship of the combined schools in 1933 for his perceived antipathy to the Nazi government, he led an institution regarded by Nikolaus Pevsner as one of the two most important in Germany — an honor shared with the Bauhaus. In terms of the scope of its curriculum and the number of its students, Paul’s school in Berlin far surpassed its contemporary in Dessau. Paul’s students, either in his nominally private architectural practice or in his academic atelier, included Ludwig Mies
Ludwig Mies van der Rohe
Ludwig Mies van der Rohe was a German architect. He is commonly referred to and addressed as Mies, his surname....
, Adolf Meyer
Adolf Meyer
Adolf Meyer may refer to:*Adolf Bernard Meyer , German anthropologist and ornithologist*Adolf Meyer , Swiss psychiatrist*Adolf Meyer , German architect-See also:...
, Paul Thiersh, Kem Weber
Kem Weber
Kem Weber was a furniture and industrial designer, architect, art director, and teacher who created several iconic designs of the 'Streamline' style.-Early career:...
, and Sergius Ruegenberg.

Paul’s architecture was closely related to his designs for furnishings and interiors. Prior to the First World War he was best known as a residential architect. His houses were simple and elegant, efficiently planned and devoid of superfluous ornament. His favored vocabulary, an abstracted classicism, had a profound influence on the work of his students and apprentices. In 1914 Paul designed a model house and two restaurants for the Werkbund exhibition in Cologne
Cologne
Cologne is Germany's fourth-largest city , and is the largest city both in the Germany Federal State of North Rhine-Westphalia and within the Rhine-Ruhr Metropolitan Area, one of the major European metropolitan areas with more than ten million inhabitants.Cologne is located on both sides of the...
. His buildings reflected the prevailing tone of the exhibition, and underscored the extent to which his pre-war work reflected the harmonious culture advocated by the Werkbund.

After 1918, Paul’s architecture reflected the changing economic and social conditions of the Weimar Republic. In 1924 he designed the Plattenhaus Typ 1018 for the Deutsche Werkstätten, a prefabricated concrete dwelling developed in response to the pressing need for affordable housing. Although the stark, prismatic volumes of the Plattenhaus reflected the vocabulary of the neue Sachlichkeit
New Objectivity
The New Objectivity is a term used to characterize the attitude of public life in Weimar Germany as well as the art, literature, music, and architecture created to adapt to it...
, the elegant detailing was typical of Paul’s pre-war designs. By the end of the decade, he was completing large, commercial projects throughout Germany. In 1928 he was working on a department store for the Sinn company in Gelsenkirchen, the Dischhaus office building in Cologne, and the Hochhaus am Kleistpark, the first skyscraper in Berlin. The Sinn department store, with its cantilevered reinforced concrete frame and entirely glass curtain walls, exemplified the technical sophistication of these buildings, which demonstrated Paul’s mastery of the emerging International Style
International style (architecture)
The International style is a major architectural style that emerged in the 1920s and 1930s, the formative decades of Modern architecture. The term originated from the name of a book by Henry-Russell Hitchcock and Philip Johnson, The International Style...
. His career was effectively terminated in 1933, when the Nazi accession resulted in his forced resignation from the Vereinigte Staatsschulen, his expulsion from the Prussian Academy, and his renunciation of the prospect of significant architectural commissions.

As a teacher, designer and architect, Bruno Paul was one of the progenitors of the Modern Movement
Modernism
Modernism, in its broadest definition, is modern thought, character, or practice. More specifically, the term describes the modernist movement, its set of cultural tendencies and array of associated cultural movements, originally arising from wide-scale and far-reaching changes to Western society...
. His work embodied one of the most significant, and frequently overlooked, directions in the history of progressive design in Europe, that of a pragmatic Modernism attuned to the needs and desires of the middle class. Paul’s mature designs embodied simplicity and clarity of form, stylistic abstraction and functional elegance. By promoting these ideals through his involvement with the Werkbund, his leadership of the Vereinigte Staatsschulen in Berlin, and his prolific work as a designer, Bruno Paul facilitated the popular acceptance of Modernism as the characteristic style of the Twentieth Century.