Encyclopedia
The brown woolly monkey or common woolly monkey or Humboldt's Woolly Monkey (Lagothrix lagotricha) is a woolly monkey
Woolly monkey
The woolly monkeys are the genus Lagothrix of New World monkeys, usually placed in the family Atelidae.There are four species of woolly monkey. All originate from the rainforests of South America...
from Colombia
Colombia
Colombia, officially the Republic of Colombia , is a unitary constitutional republic comprising thirty-two departments. The country is located in northwestern South America, bordered to the east by Venezuela and Brazil; to the south by Ecuador and Peru; to the north by the Caribbean Sea; to the...
, Ecuador
Ecuador
Ecuador , officially the Republic of Ecuador is a representative democratic republic in South America, bordered by Colombia on the north, Peru on the east and south, and by the Pacific Ocean to the west. It is one of only two countries in South America, along with Chile, that do not have a border...
, Peru
Peru
Peru , officially the Republic of Peru , is a country in western South America. It is bordered on the north by Ecuador and Colombia, on the east by Brazil, on the southeast by Bolivia, on the south by Chile, and on the west by the Pacific Ocean....
and Brazil
Brazil
Brazil , officially the Federative Republic of Brazil , is the largest country in South America. It is the world's fifth largest country, both by geographical area and by population with over 192 million people...
. It lives in groups of 2 to 70 individuals, usually splitting the group into smaller subgroups while in activity.

Many published sources give the systematic name as L. lagothricha, because Fooden chose that spelling as the correct spelling, when he revised the genus. Von Humboldt used both spellings in his original description, so the International Zoological Code permits a first reviser to choose the spelling that is to be considered the "correct spelling". 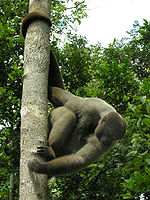