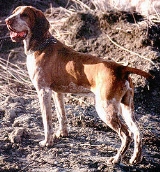 
The Bracco Italiano is a breed
Dog breed
Dog breeds are groups of closely related and visibly similar domestic dogs, which are all of the subspecies Canis lupus familiaris, having characteristic traits that are selected and maintained by humans, bred from a known foundation stock....
of dog
Dog
The domestic dog is a domesticated form of the gray wolf, a member of the Canidae family of the order Carnivora. The term is used for both feral and pet varieties. The dog may have been the first animal to be domesticated, and has been the most widely kept working, hunting, and companion animal in...
developed in Italy
Italy
Italy , officially the Italian Republic languages]] under the European Charter for Regional or Minority Languages. In each of these, Italy's official name is as follows:;;;;;;;;), is a unitary parliamentary republic in South-Central Europe. To the north it borders France, Switzerland, Austria and...
as a versatile gun dog
Pointing breed
A pointing breed is a type of gundog typically used in finding game. Gundogs are traditionally divided into three classes: retrievers, flushing dogs, and pointing breeds. The name pointer comes from the dog's instinct to point, by stopping and aiming its muzzle towards game. This demonstrates to...
. It is not common in its native country and is virtually unknown elsewhere.

The Bracco - or Italian Pointer- should be athletic and powerful in appearance, most resembling a cross between a German Shorthaired Pointer and a Bloodhound, although it is nothing like them in character. It has pendulous upper lips and long ears that create a serious expression. It should be "almost square", meaning that its height at the withers
Withers
The withers is the ridge between the shoulder blades of a four-legged animal. In many species it is the tallest point of the body, and in horses and dogs it is the standard place to measure the animal's height .-Horses:The withers in horses are formed by the dorsal spinal processes of roughly the...
should be almost the same as the length of its body. It should not however be actually square as this would render its famous rear driving push off and front/rear extension to be compromised, thus losing much of its powerful grace. The tail can be docked, mostly due to the strong possibility of injury in rough/dense terrain when hunting, however there has been a sea-change in Italy, with some now working the breed with full tail.

The coat is short, dense, and glossy. The texture should be fairly hard, though somewhat shorter and softer on the head, throat, ears, legs, and feet. Shedding happens a couple of times a year, and a hound glove really helps in removing dead coat.

The most common colours are Bianco-Arancio - White-Orange and Roano-Marrone - Roano-Brown, chestnut, or amber coloured patches on the face, ears, base of tail, and body.

Black on the coat is a fault, as are "three-color" dogs, such as orange/white with chestnut spottings above the eyes, on the muzzle and legs, such as the pattern of a Doberman or Rottweiler.
weight is 25–40 kg.

The gait, when hunting, starts out as a gallop, but slows to a long trot as the dog comes into scent. This trot should be long and fluid, with plenty of reach and drive (the 'almost square' body contributes to this). As a Bracco comes closer and closer to scent, the gait slows to a creep, and settles into a non-moving "point", with a front leg usually held up in the classic pointing dog position. The head should be held above the topline, which facilitates the air scenting for which this breed is known. A well-built Bracco, with a full and developed musculature covering, is an attractive mover and covers a lot of ground.

Braccos are very much a people-loving dog and thrive on human companionship, having a strong need to be close to their people. They are a particularly good family dog, and many have a strong love of children. They get along well with other dogs and pets, if trained to do so - it is, afterall, a hunting breed - and must be taught what to chase and what not to. They are very willing to please as long as they have decided that your idea is better than theirs. Obedience training is a must for a Bracco, and the more is asked of them, the better they do. Harsh reprimands do not work with this breed unless the reprimand is a fair one - and harshness must occasionally be used with some dogs to remind them who is actually in charge. Although not an aggressive breed, many Braccos will alert if there is a reason, and some will bark or growl if there's a good reason.

The breed loves to hunt
Hunting
Hunting is the practice of pursuing any living thing, usually wildlife, for food, recreation, or trade. In present-day use, the term refers to lawful hunting, as distinguished from poaching, which is the killing, trapping or capture of the hunted species contrary to applicable law...
, and they excel at it - in fact, a non-hunting Bracco is not a happy Bracco, and will act out in various other ways. Hunting without a gun is an area in which the Bracco can excel and this can be a great opportunity for training the dog to connect with the owner. They are an active breed, but require more mental exercise than physical exercise to keep them happy- but regular free running will actually entertain both their minds and senses satisfactorily and so should be encouraged.

The Bracco Italiano originated in Italy, and there are writings concerning the breed that date back to the 4th and 5th centuries BC. It is believed to be a cross between a Segugio Italiano
Segugio Italiano
The Segugio Italiano is an Italian breed of dog of the scenthound family. It comes in both short-haired and wire-haired varieties. It is thought to be an ancient breed, descended in pre-Roman eras from progenitor scenthounds in ancient Egypt....
(a coursing hound) and the Asiatic Mastiff. Others claim the breed goes back to the St. Hubert Hound. Undoubtedly, both hounds and gundogs are in the breeds ancestry for there was an old practice of mating these together to produce a dog capeable of pointing, but with more stamina.

There are two variations of the breed. The first originated in Piedmont, and was for that reason known as the Piedmontese Pointer. The other originated in Lombardy
Lombardy
Lombardy is one of the 20 regions of Italy. The capital is Milan. One-sixth of Italy's population lives in Lombardy and about one fifth of Italy's GDP is produced in this region, making it the most populous and richest region in the country and one of the richest in the whole of Europe...
, and was known as the Lombard Pointer. The Bracco from Piedmont
Piedmont
Piedmont is one of the 20 regions of Italy. It has an area of 25,402 square kilometres and a population of about 4.4 million. The capital of Piedmont is Turin. The main local language is Piedmontese. Occitan is also spoken by a minority in the Occitan Valleys situated in the Provinces of...
is lighter in color and in build, probably due to the mountainous terrain there. The Lombard Pointer is dark in color and thicker in body. It was well established by the Middle Ages. The Bracco thrived during the Renaissance and was bred by both the Medici
Medici
The House of Medici or Famiglia de' Medici was a political dynasty, banking family and later royal house that first began to gather prominence under Cosimo de' Medici in the Republic of Florence during the late 14th century. The family originated in the Mugello region of the Tuscan countryside,...
and Gonzaga
House of Gonzaga
The Gonzaga family ruled Mantua in Northern Italy from 1328 to 1708.-History:In 1433, Gianfrancesco I assumed the title of Marquis of Mantua, and in 1530 Federico II received the title of Duke of Mantua. In 1531, the family acquired the Duchy of Monferrato through marriage...
families.

Before WW II and later it is highlighted the work done by the international breeder and judge of dogs Commendatore and Cavaliere Paolo Ciceri, who was president and a founder of SABI and considered the Father of Bracco Italiano. Many books were written by this man until his death, the dogs in his kennel, dei Ronchi, were considered the standard of the breed.
Some of them were even introduced to America by his son Giancarlo Ciceri.

They were sought out by the aristocracy and used to hunt feathered game. At the end of the 19th century and the early 20th century the breed nearly became extinct. Latterly, it was saved primarily by the combined efforts of the Italian breeder Ferdinando Delor de Ferrabouc and - during the later World Wars - of a few staunch Italian breeders whose families had already dedicated themselves to the Bracco over several centuries.

The Italian standard for the breed was released in 1949 from the S.A.B.I. (Societá Amatori Bracco Italiano) in Lodi, Lombardy. It came to England
England
England is a country that is part of the United Kingdom. It shares land borders with Scotland to the north and Wales to the west; the Irish Sea is to the north west, the Celtic Sea to the south west, with the North Sea to the east and the English Channel to the south separating it from continental...
in 1989. It is practically unheard of by most in the United States
United States
The United States of America is a federal constitutional republic comprising fifty states and a federal district...
, though it has a small, but staunch, group of supporters there.