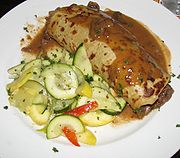 The most popular version of the dish consists of finely grated, raw potato and mashed potato with flour, baking soda, buttermilk
Buttermilk
Buttermilk refers to a number of dairy drinks. Originally, buttermilk was the liquid left behind after churning butter out of cream. It also refers to a range of fermented milk drinks, common in warm climates where unrefrigerated fresh milk otherwise sours quickly...
and sometimes egg
Egg (food)
Eggs are laid by females of many different species, including birds, reptiles, amphibians, and fish, and have probably been eaten by mankind for millennia. Bird and reptile eggs consist of a protective eggshell, albumen , and vitellus , contained within various thin membranes...
. The grated potato may be strained to remove most of the starch
Starch
Starch or amylum is a carbohydrate consisting of a large number of glucose units joined together by glycosidic bonds. This polysaccharide is produced by all green plants as an energy store...
and water
Water
Water is a chemical substance with the chemical formula H2O. A water molecule contains one oxygen and two hydrogen atoms connected by covalent bonds. Water is a liquid at ambient conditions, but it often co-exists on Earth with its solid state, ice, and gaseous state . Water also exists in a...
but this is not necessary. The mixture is fried on a griddle
Griddle
A griddle is a cooking device consisting of a broad flat surface that can be heated using a variety of means, and is used in both residential and commercial applications for a variety of cooking operations. Most commonly, the griddle consists of a flat metal plate, but in the non-industrialized...
pan for a few minutes on each side, similar to a normal pancake
Pancake
A pancake is a thin, flat, round cake prepared from a batter, and cooked on a hot griddle or frying pan. Most pancakes are quick breads; some use a yeast-raised or fermented batter. Most pancakes are cooked one side on a griddle and flipped partway through to cook the other side...
. Traditional alternatives include using only raw potatoes, boiling it as a dumpling
Dumpling
Dumplings are cooked balls of dough. They are based on flour, potatoes or bread, and may include meat, fish, vegetables, or sweets. They may be cooked by boiling, steaming, simmering, frying, or baking. They may have a filling, or there may be other ingredients mixed into the dough. Dumplings may...
or baking it as a loaf
Loaf
A loaf is a shape, usually rounded or oblong, mass of food. It may refer to a bread, or meatloaf.The term "loaf" sometimes refers to "head" from the rhyming slang "loaf of bread" ....
. The most noticeable difference between boxty and other fried potato dishes is its smooth, fine grained consistency.

Boxty is seen as so much a part of the local culture in the areas in which it is made, that it has inspired folk rhymes, such as:

As the interest in Irish cuisine
Irish cuisine
Irish cuisine is a style of cooking originating from Ireland or developed by Irish people. It evolved from centuries of social and political change. The cuisine takes its influence from the crops grown and animals farmed in its temperate climate. The introduction of the potato in the second half of...
has increased, so the popularity of boxty has risen. It is not unusual to see boxty on the menus of restaurants outside the areas with which it is traditionally associated. Boxty may be bought in shops and supermarkets either in the dumpling form or ready cooked as pancakes. Some modern recipes use garlic
Garlic
Allium sativum, commonly known as garlic, is a species in the onion genus, Allium. Its close relatives include the onion, shallot, leek, chive, and rakkyo. Dating back over 6,000 years, garlic is native to central Asia, and has long been a staple in the Mediterranean region, as well as a frequent...
and other spices to flavour the mixture. It is occasionally served as wrap, similar to kebabs for fajitas. For hygiene
Hygiene
Hygiene refers to the set of practices perceived by a community to be associated with the preservation of health and healthy living. While in modern medical sciences there is a set of standards of hygiene recommended for different situations, what is considered hygienic or not can vary between...
and convenience, the raw potato may be blended in a food processor
Food processor
A food processor is a kitchen appliance used to facilitate various repetitive tasks in the process of preparation of food. Today, the term almost always refers to an electric-motor-driven appliance, although there are some manual devices also referred to as "food processors".Food processors are...
instead of grating it by hand.