Encyclopedia
The Book of Micah is one of fifteen prophetic books in the Hebrew bible
Hebrew Bible
The Hebrew Bible is a term used by biblical scholars outside of Judaism to refer to the Tanakh , a canonical collection of Jewish texts, and the common textual antecedent of the several canonical editions of the Christian Old Testament...
/Old Testament
Old Testament
The Old Testament, of which Christians hold different views, is a Christian term for the religious writings of ancient Israel held sacred and inspired by Christians which overlaps with the 24-book canon of the Masoretic Text of Judaism...
, and the sixth of the twelve minor prophets. It records the sayings of Mikayahu, meaning "Who is like Yahweh?", an 8th century (BC) prophet from the village of Moresheth in Judah
Kingdom of Judah
The Kingdom of Judah was a Jewish state established in the Southern Levant during the Iron Age. It is often referred to as the "Southern Kingdom" to distinguish it from the northern Kingdom of Israel....
. The book has three major divisions, chapters 1-2, 3-5 and 6-7, each introduced by the word "Hear," with a pattern of alternating announcements of doom and expressions of hope within each division. Micah reproaches unjust leaders, defends the rights of the poor against the rich and powerful, and preaches social justice; while looking forward to a world at peace centred on Zion under the leadership of a new Davidic monarch. 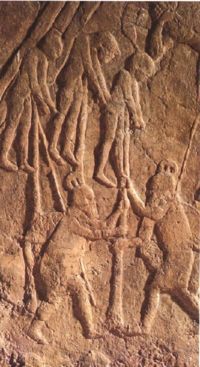 At the broadest level Micah can be divided into three roughly equal parts:

Within this broad three-part structure are a series of alternating oracles of judgment and promises of restoration: 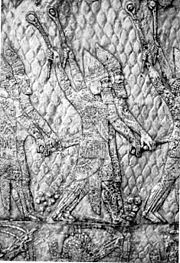 Chapter 1:1 identifies the prophet as "Micah of Moresheth" (a town in southern Judah), and states that he lived during the reigns of Jotham
Jotham
Jotham was the youngest of Gideon's seventy sons. He escaped when the rest were put to death by the order of Abimelech . When "the citizens of Shechem and the whole house of Millo" were gathered together "by the plain of the pillar" "that was in Shechem, to make Abimelech king," from one of the...
, Ahaz
Ahaz
Ahaz was king of Judah, and the son and successor of Jotham. He is one of the kings mentioned in the genealogy of Jesus in the Gospel of Matthew....
and Hezekiah
Hezekiah
Hezekiah was the son of Ahaz and the 14th king of Judah. Edwin Thiele has concluded that his reign was between c. 715 and 686 BC. He is also one of the most prominent kings of Judah mentioned in the Hebrew Bible....
, roughly 750-700 BCE.

Micah's career corresponds to the period when, after a long period of peace, Israel, Judah, and the other nations of the region came under increasing pressure from the aggressive and rapidly expanding Assyrian empire. Between 734 and 727 Tiglath-Pileser III
Tiglath-Pileser III
Tiglath-Pileser III was a prominent king of Assyria in the eighth century BC and is widely regarded as the founder of the Neo-Assyrian Empire. Tiglath-Pileser III seized the Assyrian throne during a civil war and killed the royal family...
of Assyria conducted almost annual campaigns in Palestine, reducing Israel, Judah and the Philistine cities to vassalage, receiving tribute from Ammon, Moab and Edom, and absorbing Damascus (the kingdom of Aram
Aram Damascus
Aram Damascus was an Aramaean state around Damascus in Syria, from the late 12th century BCE to 734 BCE.Sources for this state come from texts that can be divided into three categories: Assyrian annals, Aramaean texts, and the Hebrew Bible....
) into the Assyrian empire. On Tiglath-Pileser's death Israel rebelled, resulting in an Assyrian counter-attack and the destruction of the capital, Samaria
Samaria
Samaria, or the Shomron is a term used for a mountainous region roughly corresponding to the northern part of the West Bank.- Etymology :...
, in 721 after a three-year siege. Micah 1:2-7 draws on this event: Samaria, says the prophet, has been destroyed by God because of its crimes of idolatry, oppression of the poor, and misuse of power. The Assyrian attacks on Israel (the northern kingdom) led to an influx of refugees into Judah, which would have increased social stresses, while at the same time the authorities in Jerusalem had to invest huge amounts in tribute and defense.

When the Assyrians attacked Judah in 701 they did so via the Philistine coast and the Shephelah, the border region which included Micah's village of Moresheth, as well as Lachish
Lachish
Lachish was an ancient Near East town located at the site of modern Tell ed-Duweir in the Shephelah, a region between Mount Hebron and the maritime plain of Philistia . The town was first mentioned in the Amarna letters as Lakisha-Lakiša...
, Judah's second largest city. This in turn forms the background to verses 1:8-16, in which Micah warns the towns of the coming disaster (Lachish is singled out for special mention, accused of the corrupt practices of both Samaria and Jerusalem). In verses 2:1-5 he denounces the appropriation of land and houses, which might simply be the greed of the wealthy and powerful, or possibly the result of the militarising of the area in preparation for the Assyrian attack.

It is widely, though not universally, accepted by scholars that only chapters 1-3 contain material from the late 8th century prophet Micah. The latest material comes from the post-Exilic period after the Temple was rebuilt in 515 BCE, so that the early 5th century BCE seems to be the period when the book was completed. The first stage was the collection and arrangement of some spoken sayings of the historical Micah (the material in chapters 1-3), in which the prophet attacks those who build estates through oppression and depicts the Assyrian invasion of Judah as Yahweh's punishment on the kingdom's corrupt rulers, including a prophesy that the Temple will be destroyed. The prophesy was not fulfilled in Micah's time, but a hundred years later Judah was facing a similar crisis with Babylon
Babylon
Babylon was an Akkadian city-state of ancient Mesopotamia, the remains of which are found in present-day Al Hillah, Babil Province, Iraq, about 85 kilometers south of Baghdad...
, and Micah's prophesies were reworked and expanded to reflect the new situation. Still later, after Jerusalem did fall to the Babylonians, the book was revised and expanded further to reflect the circumstances of the late exilic and post-exilic community.

Micah addresses the future of Judah/Israel after the Babylonian exile. Like Isaiah
Book of Isaiah
The Book of Isaiah is the first of the Latter Prophets in the Hebrew Bible, preceding the books of Ezekiel, Jeremiah and the Book of the Twelve...
, the book has a vision of the punishment of Israel and creation of a "remnant", followed by world peace centred on Zion under the leadership of a new Davidic monarch; the people should do justice, turn to Yahweh, and await the end of their punishment. However, whereas Isaiah sees Jacob/Israel joining "the nations" under Yahweh's rule, Micah looks forward to Israel ruling over the nations. Insofar as Micah appears to draw on and rework parts of Isaiah, it seems designed at least partly to provide a counterpoint to that book.