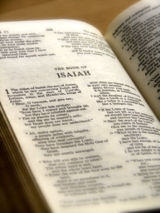 The book has 66 chapters: the first 39 chapters prophesy doom for a sinful Judah
Kingdom of Judah
The Kingdom of Judah was a Jewish state established in the Southern Levant during the Iron Age. It is often referred to as the "Southern Kingdom" to distinguish it from the northern Kingdom of Israel....
and for all the nations of the world that oppose God, while the last 27 prophesy the restoration of the nation of Israel and a new creation in God's glorious future kingdom; this section includes the Songs of the Suffering Servant, four separate passages referring to the nation of Israel, interpreted by Christian
Christian
A Christian is a person who adheres to Christianity, an Abrahamic, monotheistic religion based on the life and teachings of Jesus of Nazareth as recorded in the Canonical gospels and the letters of the New Testament...
s as prefiguring
Typology (theology)
Typology in Christian theology and Biblical exegesis is a doctrine or theory concerning the relationship between the Old and New Testaments...
the coming of Jesus Christ.

Tradition ascribes the book to Isaiah himself (for example Josephus
Josephus
Titus Flavius Josephus , also called Joseph ben Matityahu , was a 1st-century Romano-Jewish historian and hagiographer of priestly and royal ancestry who recorded Jewish history, with special emphasis on the 1st century AD and the First Jewish–Roman War, which resulted in the Destruction of...
said that Isaiah's prophecies about Cyrus the Great
Cyrus the Great
Cyrus II of Persia , commonly known as Cyrus the Great, also known as Cyrus the Elder, was the founder of the Achaemenid Empire. Under his rule, the empire embraced all the previous civilized states of the ancient Near East, expanded vastly and eventually conquered most of Southwest Asia and much...
were written 210 years earlier and Cyrus “seized by a strong desire and ambition to do what had been written”—see self-fulfilling prophecy
Self-fulfilling prophecy
A self-fulfilling prophecy is a prediction that directly or indirectly causes itself to become true, by the very terms of the prophecy itself, due to positive feedback between belief and behavior. Although examples of such prophecies can be found in literature as far back as ancient Greece and...
), but modern scholars have for over a hundred years divided Isaiah into three parts: Proto-Isaiah (chapters 1–39), containing the words of the 8th century BCE prophet and 7th century BCE expansions; Deutero-Isaiah (chapters 40–55), a 6th century BCE work by an author who wrote towards the end of the Babylonian captivity
Babylonian captivity
The Babylonian captivity was the period in Jewish history during which the Jews of the ancient Kingdom of Judah were captives in Babylon—conventionally 587–538 BCE....
; and Trito-Isaiah (chapters 56–66), composed probably by multiple authors in Jerusalem shortly after the exile.
The oldest surviving manuscripts of Isaiah are two scrolls found among the Dead Sea Scrolls
Dead Sea scrolls
The Dead Sea Scrolls are a collection of 972 texts from the Hebrew Bible and extra-biblical documents found between 1947 and 1956 on the northwest shore of the Dead Sea, from which they derive their name...
: dating from about a century before the time of Jesus, they are substantially identical with the Masoretic version which forms the basis of most modern English-language versions of the book.

How strong was Babylon as a country during Isaiah's time

How strong was Babylon as a country during Isaiah's time?

How many times in THE NEW TESTAMENT is the book of ISAIAH quoted?
More

Who was the author of the book of Isaiah
More
x