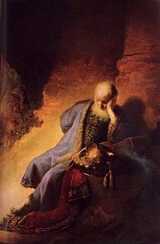 Encyclopedia
The Book of Lamentations ) is a poetic book of the Hebrew Bible
Hebrew Bible
The Hebrew Bible is a term used by biblical scholars outside of Judaism to refer to the Tanakh , a canonical collection of Jewish texts, and the common textual antecedent of the several canonical editions of the Christian Old Testament...
composed by the Jewish prophet Jeremiah
Jeremiah
Jeremiah Hebrew：יִרְמְיָה , Modern Hebrew:Yirməyāhū, IPA: jirməˈjaːhu, Tiberian:Yirmĭyahu, Greek:Ἰερεμίας), meaning "Yahweh exalts", or called the "Weeping prophet" was one of the main prophets of the Hebrew Bible...
. It mourns the destruction of Jerusalem
Siege of Jerusalem (587 BC)
In 589 BC, Nebuchadnezzar II laid siege to Jerusalem, culminating in the destruction of the city and its temple in 587 BC.-Siege:Following the siege of 597 BC, Nebuchadnezzar installed Zedekiah as tributary king of Judah at the age of twenty-one. However, Zedekiah revolted against Babylon, and...
and the Holy Temple in the 6th Century BCE
6th century BC
The 6th century BC started the first day of 600 BC and ended the last day of 501 BC.Pāṇini, in India, composed a grammar for Sanskrit, in this century or slightly later...
.

In Judaism
Judaism
Judaism ) is the "religion, philosophy, and way of life" of the Jewish people...
it is traditionally recited on the fast day of Tisha B'Av
Tisha B'Av
|Av]],") is an annual fast day in Judaism, named for the ninth day of the month of Av in the Hebrew calendar. The fast commemorates the destruction of both the First Temple and Second Temple in Jerusalem, which occurred about 655 years apart, but on the same Hebrew calendar date...
("Ninth of Av") the saddest day on the Jewish calendar mourning the destruction of both the First and the Second Temple
Second Temple
The Jewish Second Temple was an important shrine which stood on the Temple Mount in Jerusalem between 516 BCE and 70 CE. It replaced the First Temple which was destroyed in 586 BCE, when the Jewish nation was exiled to Babylon...
s in Jerusalem.

In Christianity
Christianity
Christianity is a monotheistic religion based on the life and teachings of Jesus as presented in canonical gospels and other New Testament writings...
it is traditionally read during Tenebrae
Tenebrae
Tenebrae may refer to:* Tenebrae, a Christian worship service held during Holy Week * Tenebrae , a horror film by Dario Argento* Tenebrae , soundtrack album for the Dario Argento film...
of the Holy Triduum.

It is called in the Hebrew canon 'Eikhah, meaning "How," being the formula for the commencement of a song of wailing. It is the first word of the book (see 2 Sam. 1:19-27). The Septuagint adopted the name rendered "Lamentations" (or "Threnoi Hieremiou", abbreviated "Thren." in some Latin commentaries, from the Greek threnoi = Hebrew qinoth) now in common use, to denote the character of the book, in which the prophet mourns over the desolations brought on Jerusalem and the Holy Land by the Chaldeans
Babylon
Babylon was an Akkadian city-state of ancient Mesopotamia, the remains of which are found in present-day Al Hillah, Babil Province, Iraq, about 85 kilometers south of Baghdad...
. In the Hebrew Bible (the Tanakh) it is placed among the Ketuvim
Ketuvim
Ketuvim or Kəṯûḇîm in actual Biblical Hebrew is the third and final section of the Tanak , after Torah and Nevi'im . In English translations of the Hebrew Bible, this section is usually entitled "Writings" or "Hagiographa"...
, the Writings. 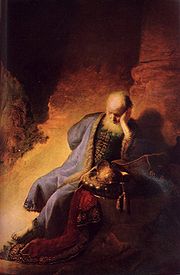 According to Jewish and Christian traditions, authorship is assigned to the Prophet
Prophet
In religion, a prophet, from the Greek word προφήτης profitis meaning "foreteller", is an individual who is claimed to have been contacted by the supernatural or the divine, and serves as an intermediary with humanity, delivering this newfound knowledge from the supernatural entity to other people...
Jeremiah, who was ministering the Word of God during the conquest of Jerusalem by Nebuchadnezzar, during which the First Temple
Temple in Jerusalem
The Temple in Jerusalem or Holy Temple , refers to one of a series of structures which were historically located on the Temple Mount in the Old City of Jerusalem, the current site of the Dome of the Rock. Historically, these successive temples stood at this location and functioned as the centre of...
was destroyed and King Zedekiah
Zedekiah
Zedekiah or Tzidkiyahu was the last king of Judah before the destruction of the kingdom by Babylon. He was installed as king of Judah by Nebuchadnezzar II, king of Babylon, after a siege of Jerusalem to succeed his nephew, Jeconiah, who was overthrown as king after a reign of only three months and...
was taken prisoner (cf. 2 Kings 24-25, Jer. 39:1-10 and Jer. 52). In the Septuagint and the Vulgate
Vulgate
The Vulgate is a late 4th-century Latin translation of the Bible. It was largely the work of St. Jerome, who was commissioned by Pope Damasus I in 382 to make a revision of the old Latin translations...
the Lamentations are placed directly after the Prophet.

It is said that Jeremiah retired to a cavern outside the Damascus gate, where he wrote this book. That cavern is still pointed out by tour guides. "In the face of a rocky hill, on the western side of the city, the local belief has placed 'the grotto of Jeremiah.' There, in that fixed attitude of grief which Michelangelo
Michelangelo
Michelangelo di Lodovico Buonarroti Simoni , commonly known as Michelangelo, was an Italian Renaissance painter, sculptor, architect, poet, and engineer who exerted an unparalleled influence on the development of Western art...
has immortalized, the prophet may well be supposed to have mourned the fall of his country" (Arthur Penrhyn Stanley
Arthur Penrhyn Stanley
Arthur Penrhyn Stanley was an English churchman, Dean of Westminster, known as Dean Stanley. His position was that of a Broad Churchman and he was the author of works on Church History.-Life and times:...
, History of the Jewish Church).

According to F. W. Dobbs-Allsopp, "the widely observed unity of form and point of view... and general resemblance in linguistic detail throughout the sequence are broadly suggestive of the work of a single author," though other scholars see Lamentations as the work of multiple authors.

Most commentators see Lamentations as reflecting the period immediately following the destruction of Jerusalem in 586 BC, though Provan argues for an ahistorical interpretation. Many elements of the lament are borne out in the historical narrative in 2 Kings
Books of Kings
The Book of Kings presents a narrative history of ancient Israel and Judah from the death of David to the release of his successor Jehoiachin from imprisonment in Babylon, a period of some 400 years...
concerning the fall of Jerusalem: Jerusalem lying in ruins (Lamentations 2:2 and 2 Kings 25:9), enemies entering the city (Lamentations 4:12 and 2 Kings 24:11), people going into exile (Lamentations 1:3 and 2 Kings 24:14) and the sanctuary being plundered (Lamentations 1:10 and 2 Kings 24:13). On the other hand, Babylon
Babylon
Babylon was an Akkadian city-state of ancient Mesopotamia, the remains of which are found in present-day Al Hillah, Babil Province, Iraq, about 85 kilometers south of Baghdad...
is never mentioned in Lamentations, though this could simply be to make the point that the judgment comes from God, and is a consequence of Judah disobeying him.

Lamentations was probably composed soon after 586 BC
Common Era
Common Era ,abbreviated as CE, is an alternative designation for the calendar era originally introduced by Dionysius Exiguus in the 6th century, traditionally identified with Anno Domini .Dates before the year 1 CE are indicated by the usage of BCE, short for Before the Common Era Common Era...
. Kraus argues that "the whole song stands so near the events that one feels everywhere as if the terrible pictures of the destruction stand still immediately before the eyes of the one lamenting."

The book consists of five separate poems. In chapter 1 the prophet dwells on the manifold miseries oppressed by which the city sits as a solitary widow weeping sorely. In chapter 2 these miseries are described in connection with national sins and acts of God. Chapter 3 speaks of hope for the people of God. The chastisement would only be for their good; a better day would dawn for them. Chapter 4 laments the ruin and desolation that had come upon the city and temple, but traces it only to the people's sins. Chapter 5 is a prayer that Zion's reproach may be taken away in the repentance and recovery of the people.

The first four poems (chapters) are acrostic
Acrostic
An acrostic is a poem or other form of writing in which the first letter, syllable or word of each line, paragraph or other recurring feature in the text spells out a word or a message. As a form of constrained writing, an acrostic can be used as a mnemonic device to aid memory retrieval. A famous...
s, like some of the Psalms (25, 34, 37, 119), i.e., each verse begins with a letter of the Hebrew alphabet taken in order. The first, second, and fourth have each twenty-two verses, the number of the letters in the Hebrew alphabet. The third has sixty-six verses, in which each three successive verses begin with the same letter. The fifth is not acrostic, but also has twenty-two verses. In the second, third and fourth chapters, the order of the 16th letter (ע) and the 17th (פ) is reversed.

The Book of Lamentations is recited annually on the Tisha b'Av, the anniversary of the destruction of both of the Jewish Temples as well as numerous other unfavorable days in Jewish history.

At the "Wailing Wall"
Western Wall
The Western Wall, Wailing Wall or Kotel is located in the Old City of Jerusalem at the foot of the western side of the Temple Mount...
in the Old City of Jerusalem, "the Jews assemble every Friday afternoon to bewail the downfall of the holy city, kissing the stone wall and watering it with their tears. They repeat from their well-worn Hebrew Bibles and prayer-books the Lamentations of Jeremiah and suitable Psalms."

In the Coptic Orthodox Church chapter three is chanted on the twelfth hour of the Good Friday
Good Friday
Good Friday , is a religious holiday observed primarily by Christians commemorating the crucifixion of Jesus Christ and his death at Calvary. The holiday is observed during Holy Week as part of the Paschal Triduum on the Friday preceding Easter Sunday, and may coincide with the Jewish observance of...
service, that commemorates the burial of Jesus.

Most modern day biblical scholars assert that the Book of Lamentations was written by one or more authors in Judah
Judea
Judea or Judæa was the name of the mountainous southern part of the historic Land of Israel from the 8th century BCE to the 2nd century CE, when Roman Judea was renamed Syria Palaestina following the Jewish Bar Kokhba revolt.-Etymology:The...
, shortly after the Babylonian conquest of Jerusalem in 586 BCE; and was penned as a response to Babylonian Exile, the intense suffering of the people of Judah, and the complete and utter destruction of Jerusalem. Werner E. Lemke and Kathleen O’Connor point out “Lamentations is probably the work of a survivor (or survivors) of the nation’s destruction who poured out sorrow, anger and dismay after the city’s traumatic defeat and occupation by the Babylonians."

The theological views that led to its author(s) writing the Book of Lamentations emanated from the cultural and religious attitudes of the people of Judah
Kingdom of Judah
The Kingdom of Judah was a Jewish state established in the Southern Levant during the Iron Age. It is often referred to as the "Southern Kingdom" to distinguish it from the northern Kingdom of Israel....
in the 6th and 7th centuries BCE and was probably also influenced by non-biblical sources which originated from the cultural and religious attitudes of Judah's neighbors of differing religions.

The Book of Lamentations reflects the theological and biblical view that what happened to Jerusalem was a deserved punishment; and its destruction was instigated by their god for the communal sins of the people.
This theological viewpoint was also widespread among Judah’s neighbors of differing religions who believed the destruction of a particular city could be attributed to the city’s deity who was punishing the city for some communal sin or wrongdoing.