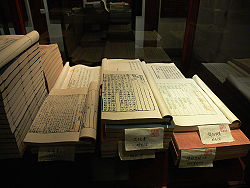 The Book of Han, Hanshu or History of the Former Han Dynasty ( - is a classical Chinese
History of China
Chinese civilization originated in various regional centers along both the Yellow River and the Yangtze River valleys in the Neolithic era, but the Yellow River is said to be the Cradle of Chinese Civilization. With thousands of years of continuous history, China is one of the world's oldest...
history finished in AD 111, covering the history of China under the Western Han from 206 BC to 25 AD. It is also sometimes called the Book of Former Han. The work was composed by Ban Biao
Ban Biao
Ban Biao , courtesy name , was a Chinese historian, and an official born in what is now Xianyang, Shaanxi during the Han Dynasty. He was the nephew of Consort Ban, a famous poet and concubine to Emperor Cheng....
, Ban Gu
Ban Gu
Ban Gu , courtesy name Mengjian , was a 1st century Chinese historian and poet best known for his part in compiling the Book of Han. He also wrote in the main poetic genre of the Han era, a kind of poetry interspersed with prose called fu. Some are anthologized by Xiao Tong in his Selections of...
, and Ban Zhao
Ban Zhao
Bān Zhāo , courtesy name Huiban , was the first known female Chinese historian. She completed her brother Ban Gu's work as he was imprisoned and executed in the year 92 BCE. because of his association with the family of Empress Dowager Dou. It was said her works could have filled eight volumes...
. A second work, the Book of the Later Han covers the Eastern Han period from 25 to 220, and was composed in the fifth century by Fan Ye
Fan Ye (historian)
Fan Ye , courtesy name Weizong , was a Chinese historian and the compiler of Book of Later Han of Liu Song. Fan came from an official family background, he was born in present-day Shaoxing, Zhejiang, his ancestry was from Nanyang, Henan. His father was Fan Tai .-References:*Tan, Jiajian, ....
(398–445). Various scholars have estimated that the earliest material covered in the book dates back to between 206 and 202 BCE. The book also contains the first written historical mention of Japan
Japan
Japan is an island nation in East Asia. Located in the Pacific Ocean, it lies to the east of the Sea of Japan, China, North Korea, South Korea and Russia, stretching from the Sea of Okhotsk in the north to the East China Sea and Taiwan in the south...
.

This history developed from a continuation of Sima Qian
Sima Qian
Sima Qian was a Prefect of the Grand Scribes of the Han Dynasty. He is regarded as the father of Chinese historiography for his highly praised work, Records of the Grand Historian , a "Jizhuanti"-style general history of China, covering more than two thousand years from the Yellow Emperor to...
's Records of the Grand Historian or, more correctly, Records of the Grand Scribe, initiated by Ban Gu's father, Ban Biao
Ban Biao
Ban Biao , courtesy name , was a Chinese historian, and an official born in what is now Xianyang, Shaanxi during the Han Dynasty. He was the nephew of Consort Ban, a famous poet and concubine to Emperor Cheng....
, at the beginning of the Later Han Dynasty. This work is usually referred to as Later Traditions 後傳, which clearly indicates that the elder Ban's work was meant to be a continuation. (It should be noted that other scholars of the time, including Liu Xin
Liu Xin
Liu Xin , later changed name to Liu Xiu , courtesy name Zijun , was a Chinese astronomer, historian, and editor during the Xin Dynasty . He was the son of Confucian scholar Liu Xiang and an associate of other prominent thinkers such as the philosopher Huan Tan...
and Yang Xiong
Yang Xiong
Yang Xiong is a fictional character in the Water Margin, one of the Four Great Classical Novels of Chinese literature. He ranks 32nd of the 36 Heavenly Spirits of the 108 Liangshan heroes and is nicknamed "Sick Guan Suo".-Background:...
also worked on continuations of Sima's history.) After Ban Biao's death, his eldest son Ban Gu
Ban Gu
Ban Gu , courtesy name Mengjian , was a 1st century Chinese historian and poet best known for his part in compiling the Book of Han. He also wrote in the main poetic genre of the Han era, a kind of poetry interspersed with prose called fu. Some are anthologized by Xiao Tong in his Selections of...
was dissatisfied with what his father had completed, and he began a new history that started with the beginning of the Han dynasty. This distinguished it from Sima Qian's history, which had begun with China's earliest legendary rulers. In this way, Ban Gu initiated the format for dynastic histories that was to remain the model for the official histories until modern times.

For the periods where they overlapped, Ban Gu adopted nearly verbatim much of Sima Qian's material, though in some cases he also expanded it. He also incorporated at least some of what his father had written, though it is difficult to know how much. The completed work ran to a total of 100 fascicles 卷, and included essays on law
Law
Law is a system of rules and guidelines which are enforced through social institutions to govern behavior, wherever possible. It shapes politics, economics and society in numerous ways and serves as a social mediator of relations between people. Contract law regulates everything from buying a bus...
, science
Science
Science is a systematic enterprise that builds and organizes knowledge in the form of testable explanations and predictions about the universe...
, geography
Geography
Geography is the science that studies the lands, features, inhabitants, and phenomena of Earth. A literal translation would be "to describe or write about the Earth". The first person to use the word "geography" was Eratosthenes...
, and literature
Literature
Literature is the art of written works, and is not bound to published sources...
. Ban Gu's younger sister Ban Zhao
Ban Zhao
Bān Zhāo , courtesy name Huiban , was the first known female Chinese historian. She completed her brother Ban Gu's work as he was imprisoned and executed in the year 92 BCE. because of his association with the family of Empress Dowager Dou. It was said her works could have filled eight volumes...
finished writing the book in 111, 19 years after Ban Gu had been imprisoned. An outstanding scholar in her own right, she is thought to have written volumes 13-20 (eight chronological tables) and 26 (treatise on astronomy). As with the Records of the Grand Historian, Zhang Qian
Zhang Qian
Zhang Qian was an imperial envoy to the world outside of China in the 2nd century BCE, during the time of the Han Dynasty...
, a notable Chinese general who travelled to the west, was a key source for the cultural and socio-economic data on the Western Regions
Western Regions
The Western Regions or Xiyu was a historical name specified in the Chinese chronicles between the 3rd century BC to 8th century AD that referred to the regions west of Jade Gate, most often Central Asia or sometimes more specifically the easternmost portion of it The Western Regions or Xiyu was a...
contained in the 96th fascicle. The "Annals" section and the three chapters covering the reign of Wang Mang were translated into English by Homer H. Dubs
Homer H. Dubs
Homer Hasenpflug Dubs was a pioneering and prolific American Sinologist and polymath. Though best known for his masterful translation of sections of Ban Gu's Han shu , he published on a wide range of topics in ancient Chinese history, astronomy and philosophy...
. Other chapters have been rendered into English by Anthony Hulsewé, Clyde B. Sargent, Nancy Lee Swann, and Burton Watson.

Ban Gu's history set the standard for the writings of later Chinese dynasties, and today it is a reference used to study the Han period. It is regarded as one of the "Four Histories" 四史 of the Twenty-Four Histories
Twenty-Four Histories
The Twenty-Four Histories is a collection of Chinese historical books covering a period from 3000 BC to the Ming Dynasty in the 17th century. The whole set contains 3213 volumes and about 40 million words...
canon, together with the Records of the Grand Historian
Records of the Grand Historian
The Records of the Grand Historian, also known in English by the Chinese name Shiji , written from 109 BC to 91 BC, was the Magnum opus of Sima Qian, in which he recounted Chinese history from the time of the Yellow Emperor until his own time...
, Records of Three Kingdoms
Records of Three Kingdoms
Records of Three Kingdoms , is regarded as the official and authoritative historical text on the Three Kingdoms period of Chinese history covering the years 184-280 CE. Written by Chen Shou in the 3rd century, the work combines the smaller histories of the rival states of Cao Wei , Shu Han and...
and History of the Later Han.

Ji (紀, annal), 12 volumes. Emperors' biographies in strict annal form, which offer a chronological overview of the most important occurrences, as seen from the imperial court.

Zhi (志, memoirs), 10 volumes. Each treatise describes an area of effort of the state.

Zhuan (傳, exemplary traditions, usually translated as biographies), 70 volumes. Biographies of important people. The biographies confine themselves to the description of events that clearly show the exemplary character of the person. Two or more people are treated in one main article, as they belong to the same class of people. The last articles describe the relations between China and the various peoples beyond the frontiers.

The Japanese first appear in written history in this book (Book of the Later Han), in which it is recorded, "The people of Wo
Wa (Japan)
Japanese is the oldest recorded name of Japan. Chinese, Korean, and Japanese scribes regularly wrote Wa or Yamato "Japan" with the Chinese character 倭 until the 8th century, when the Japanese found fault with it, replacing it with 和 "harmony, peace, balance".- Historical references :The earliest...
are located across the ocean from Lelang, are divided into more than one hundred tribes, and come to offer tribute from time to time." It is later recorded that in 57, the southern Wa kingdom of Na sent an emissary named Taifu to pay tribute to Emperor Guangwu
Emperor Guangwu of Han
Emperor Guangwu , born Liu Xiu, was an emperor of the Chinese Han Dynasty, restorer of the dynasty in AD 25 and thus founder of the Later Han or Eastern Han...
and received a golden seal. The seal itself was discovered in northern Kyūshū in the 18th century. According to the Book of Wei
Book of Wei
The Book of Wei is a classic Chinese historical writing compiled by Wei Shou from 551 to 554, and serves as an important historical text describing the Northern Wei and Eastern Wei from 386 to 550....
, the most powerful kingdom on the archipelago
Archipelago
An archipelago , sometimes called an island group, is a chain or cluster of islands. The word archipelago is derived from the Greek ἄρχι- – arkhi- and πέλαγος – pélagos through the Italian arcipelago...
in the 3rd century was called Yamataikoku
Yamataikoku
or is the Sino-Japanese name of an ancient country in Wa during the late Yayoi period . The Chinese history Sanguo Zhi first recorded Yemetaiguo or Yemayiguo as the domain of shaman Queen Himiko...
and was ruled by the legendary Queen Himiko.