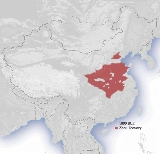 Chinese
China
Chinese civilization may refer to:* China for more general discussion of the country.* Chinese culture* Greater China, the transnational community of ethnic Chinese.* History of China* Sinosphere, the area historically affected by Chinese culture...
civilization originated in various regional centers along both the Yellow River
Yellow River
The Yellow River or Huang He, formerly known as the Hwang Ho, is the second-longest river in China and the sixth-longest in the world at the estimated length of . Originating in the Bayan Har Mountains in Qinghai Province in western China, it flows through nine provinces of China and empties into...
and the Yangtze River
Yangtze River
The Yangtze, Yangzi or Cháng Jiāng is the longest river in Asia, and the third-longest in the world. It flows for from the glaciers on the Tibetan Plateau in Qinghai eastward across southwest, central and eastern China before emptying into the East China Sea at Shanghai. It is also one of the...
valleys in the Neolithic
Neolithic
The Neolithic Age, Era, or Period, or New Stone Age, was a period in the development of human technology, beginning about 9500 BC in some parts of the Middle East, and later in other parts of the world. It is traditionally considered as the last part of the Stone Age...
era, but the Yellow River is said to be the Cradle of Chinese Civilization. With thousands of years of continuous history, China is one of the world's oldest civilization
Civilization
Civilization is a sometimes controversial term that has been used in several related ways. Primarily, the term has been used to refer to the material and instrumental side of human cultures that are complex in terms of technology, science, and division of labor. Such civilizations are generally...
s. The written history of China can be found as early as the Shang Dynasty
Shang Dynasty
The Shang Dynasty or Yin Dynasty was, according to traditional sources, the second Chinese dynasty, after the Xia. They ruled in the northeastern regions of the area known as "China proper" in the Yellow River valley...
(c. 1700 – 1046 BC), although ancient historical texts such as the Records of the Grand Historian
Records of the Grand Historian
The Records of the Grand Historian, also known in English by the Chinese name Shiji , written from 109 BC to 91 BC, was the Magnum opus of Sima Qian, in which he recounted Chinese history from the time of the Yellow Emperor until his own time...
(ca.

What were the main goals of the zhou dynasty
More
x