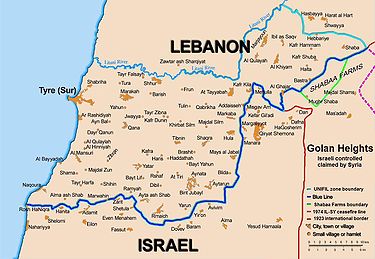 The Blue Line is a border demarcation
Demarcation line
A demarcation line means simply a boundary around a specific area, but is commonly used to denote a temporary geopolitical border, often agreed upon as part of an armistice or ceasefire.See the following examples:...
between Lebanon
Lebanon
Lebanon , officially the Republic of LebanonRepublic of Lebanon is the most common term used by Lebanese government agencies. The term Lebanese Republic, a literal translation of the official Arabic and French names that is not used in today's world. Arabic is the most common language spoken among...
and Israel
Israel
The State of Israel is a parliamentary republic located in the Middle East, along the eastern shore of the Mediterranean Sea...
published by the United Nations
United Nations
The United Nations is an international organization whose stated aims are facilitating cooperation in international law, international security, economic development, social progress, human rights, and achievement of world peace...
on 7 June 2000 for the purposes of determining whether Israel had fully withdrawn from Lebanon. At the same time, an extension, expressly not to be called the Blue Line nor considered the legally demarcated international boundary according to the UN, identified the Israeli withdrawal line between Lebanon and the Israeli-controlled Golan Heights.

On March 11, 1978, Palestine Liberation Organization
Palestine Liberation Organization
The Palestine Liberation Organization is a political and paramilitary organization which was created in 1964. It is recognized as the "sole legitimate representative of the Palestinian people" by the United Nations and over 100 states with which it holds diplomatic relations, and has enjoyed...
(PLO) operatives, led by Dalal Mugrabi, carried out the Coastal Road massacre
Coastal Road massacre
The Coastal Road massacre of 1978 was an attack involving the hijacking of a bus on Israel's Coastal Highway in which 38 Israeli civilians, including 13 children, were killed, and 71 were wounded. The attack was planned by Abu Jihad and carried out by the PLO faction Fatah...
within Israel which resulted in the deaths of 37 Israelis, including 13 children. In response, Israeli forces invaded southern Lebanon from which the PLO operated regularly during the 1970s. Starting on the night of March 14–15 and culminating a few days later, Israel Defense Forces
Israel Defense Forces
The Israel Defense Forces , commonly known in Israel by the Hebrew acronym Tzahal , are the military forces of the State of Israel. They consist of the ground forces, air force and navy. It is the sole military wing of the Israeli security forces, and has no civilian jurisdiction within Israel...
(IDF) forces occupied the entire southern part of the country except for the city of Tyre and its surrounding area. This operation is known in Israel as Operation Litani. 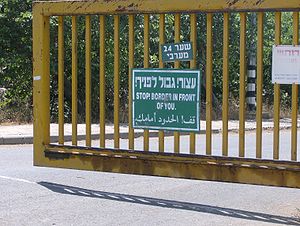 The Blue Line is based on the deployment of the IDF prior to March 14, 1978. It should not be confused with the Green Line
Green Line (Israel)
Green Line refers to the demarcation lines set out in the 1949 Armistice Agreements between Israel and its neighbours after the 1948 Arab-Israeli War...
, established in 1949, which is the armistice line of the 1948 Arab-Israeli War
1948 Arab-Israeli War
The 1948 Arab–Israeli War, known to Israelis as the War of Independence or War of Liberation The war commenced after the termination of the British Mandate for Palestine and the creation of an independent Israel at midnight on 14 May 1948 when, following a period of civil war, Arab armies invaded...
. The 1949 line is in turn the same as the 1923 Mandate Line which was the border between France and Britain's territory (see: Treaty of Sèvres
Treaty of Sèvres
The Treaty of Sèvres was the peace treaty between the Ottoman Empire and Allies at the end of World War I. The Treaty of Versailles was signed with Germany before this treaty to annul the German concessions including the economic rights and enterprises. Also, France, Great Britain and Italy...
); Lebanon is an ex-French
France
The French Republic , The French Republic , The French Republic , (commonly known as France , is a unitary semi-presidential republic in Western Europe with several overseas territories and islands located on other continents and in the Indian, Pacific, and Atlantic oceans. Metropolitan France...
mandate and Palestine / Israel an ex-British
United Kingdom
The United Kingdom of Great Britain and Northern IrelandIn the United Kingdom and Dependencies, other languages have been officially recognised as legitimate autochthonous languages under the European Charter for Regional or Minority Languages...
mandate. (See League of Nations
League of Nations
The League of Nations was an intergovernmental organization founded as a result of the Paris Peace Conference that ended the First World War. It was the first permanent international organization whose principal mission was to maintain world peace...
). The 1949 agreement stated that the line would follow the 1923 line. In 1923 38 boundary markers were placed along the 49 mile boundary and a detailed text description was published. The 2000 Blue Line differs in about a half dozen short stretches from the 1949 line, though never by more than 475 meters.

Borders are usually negotiated between countries, and between 1950 and 1967 Israeli and Lebanese surveyors managed to complete 25 non-contiguous kilometers and mark (but not sign) another quarter of the international border. On April 17, 2000, when Israeli Prime Minister Ehud Barak
Ehud Barak
Ehud Barak is an Israeli politician who served as Prime Minister from 1999 until 2001. He was leader of the Labor Party until January 2011 and holds the posts of Minister of Defense and Deputy Prime Minister in Binyamin Netanyahu's government....
announced that Israel would begin withdrawing its forces from Lebanon, the Lebanese government did not want to take part in marking the border. The UN thus conducted its own survey based on the line discussed in United Nations Security Council Resolution 425
United Nations Security Council Resolution 425
United Nations Security Council Resolution 425, adopted on March 19, 1978, five days after the Israeli invasion of Lebanon, called on Israel to withdraw immediately its forces from Lebanon and established the United Nations Interim Force In Lebanon...
.

On May 25, 2000, the government of Israel notified the Secretary-General that Israel had redeployed its forces in compliance with Security Council resolutions 425.

From May 24 to June 7, 2000, the Special Envoy
Special Envoy of the Secretary-General
A Special Envoy of the Secretary-General is a senior United Nations official appointed by the United Nations Secretary-General to deal with a set of specific issues....
travelled to Israel
Israel
The State of Israel is a parliamentary republic located in the Middle East, along the eastern shore of the Mediterranean Sea...
, Lebanon
Lebanon
Lebanon , officially the Republic of LebanonRepublic of Lebanon is the most common term used by Lebanese government agencies. The term Lebanese Republic, a literal translation of the official Arabic and French names that is not used in today's world. Arabic is the most common language spoken among...
and the Syria
Syria
Syria , officially the Syrian Arab Republic , is a country in Western Asia, bordering Lebanon and the Mediterranean Sea to the West, Turkey to the north, Iraq to the east, Jordan to the south, and Israel to the southwest....
to follow up on the implementation of the Secretary-General's May 22 report. The United Nations cartographer and his team, assisted by UNIFIL, worked on the ground to identify a line to be adopted for the practical purposes of confirming the Israeli withdrawal. While it was agreed that this would not be a formal border demarcation, the aim was to identify a line on the ground closely conforming to the internationally recognized boundaries of Lebanon, based on the best available cartographic and other documentary evidence.

On June 7 the completed map showing the withdrawal line was formally transmitted by the Force Commander of UNIFIL to his Lebanese and Israeli counterparts. Notwithstanding their reservations about the line, the Governments of Israel and Lebanon confirmed that identifying this line was solely the responsibility of the United Nations and that they would respect the line as identified. On June 8, UNIFIL teams led by Lebanese Brig. General Imad Anka and Brig. General Amin Htait commenced the work of verifying the Israeli withdrawal behind the line.

On June 16, the Secretary-General reported to the Security Council that Israel had withdrawn its forces from Lebanon in accordance with resolution 425 (1978) and met the requirements defined in his report of May 22, 2000; namely, Israel had completed the withdrawal in conformity with the line identified by the United Nations, South Lebanese Army militia had been dismantled, and all detainees held at Al-Khiam prison had been freed.

The withdrawal line has been termed the Blue Line in all official UN communications since.

On October 7, 2000, three Israeli soldiers—Adi Avitan 22, Staff Sgt. Benyamin Avraham 21, and Staff Sgt. Omar Sawaid 27—were abducted by Hezbollah forces. They were abducted while patrolling the southern (Israeli) side of the demarcation line recognized by the Secretary-General and the Security Council as the Israeli deployment line The soldiers were killed either during the attack or in its immediate aftermath.

Hezbollah precipitated the 34-day long 2006 Lebanon War when its militants fired rockets at Israeli border towns as a diversion for an anti-tank missile attack on two armored Humvees patrolling the Israeli side of the border fence. Of the seven Israeli soldiers in the two jeeps, two were wounded, five were killed, and two soldiers were taken to Lebanon. Israel responded with massive airstrike
Airstrike
An air strike is an attack on a specific objective by military aircraft during an offensive mission. Air strikes are commonly delivered from aircraft such as fighters, bombers, ground attack aircraft, attack helicopters, and others...
s and artillery
Artillery
Originally applied to any group of infantry primarily armed with projectile weapons, artillery has over time become limited in meaning to refer only to those engines of war that operate by projection of munitions far beyond the range of effect of personal weapons...
fire on targets in Lebanon and a ground invasion of southern Lebanon
Southern Lebanon
Southern Lebanon is the geographical area of Lebanon comprising the South Governorate and the Nabatiye Governorate. These two entities were divided from the same province in the early 1990s...
.

Following 2000 withdrawal, Lebanon's military authorities report Israeli jets have violated the UN resolution 1701 by entering the country's airspace and breaking sound barriers over several villages in southern parts of the nation. Lebanese troops have responded by firing at the Israeli jets with obsolete anti-aircraft weapons. Lebanese officials have filed over 1600 air space violations by Israel since the 2000 withdrawal.

On August 3, 2010, Lebanese Armed Forces
Lebanese Armed Forces
The Lebanese Armed Forces or Forces Armées Libanaises in French, also known as the Lebanese Army according to its official Website The Lebanese Armed Forces (LAF) (Arabic: القوات المسلحة اللبنانية | Al-Quwwāt al-Musallaḥa al-Lubnāniyya) or Forces Armées Libanaises in French, also known as the...
soldiers opened fire on Israeli army soldiers performing tree-cutting maintenance work on the Israeli side of the Blue Line as confirmed by UNIFIL. One Israeli was killed by Lebanese army fire and three Lebanese died when the Israel Defense Forces
Israel Defense Forces
The Israel Defense Forces , commonly known in Israel by the Hebrew acronym Tzahal , are the military forces of the State of Israel. They consist of the ground forces, air force and navy. It is the sole military wing of the Israeli security forces, and has no civilian jurisdiction within Israel...
(IDF) responded. Lebanese Information Minister Tarek Mitri stated despite the fact that Lebanon accepted earlier the Blue line "The area where the tree was to be cut yesterday ... is south of the Blue Line but is Lebanese territory." UNIFIL determined that the Israeli troops were on Israeli territory.

On August 1, 2011, UNIFIL confirmed a border incident in which no one was hurt. Israel and Lebanon offered differing accounts of the incident. A Lebanese military official said Israeli troops crossed the Blue Line 30 meters into Lebanese territory, prompting Lebanese soldiers to fire warning shots and the Israeli troops to retreat and fire at Lebanese border posts. The Israeli military sources said their forces were within Israeli territory when they came under fire from across the border.