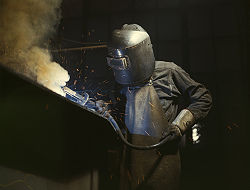 A blue-collar worker is a member of the working class
Working class
Working class is a term used in the social sciences and in ordinary conversation to describe those employed in lower tier jobs , often extending to those in unemployment or otherwise possessing below-average incomes...
who performs manual labor
Manual labour
Manual labour , manual or manual work is physical work done by people, most especially in contrast to that done by machines, and also to that done by working animals...
. Blue-collar work may involve skilled or unskilled, manufacturing
Manufacturing
Manufacturing is the use of machines, tools and labor to produce goods for use or sale. The term may refer to a range of human activity, from handicraft to high tech, but is most commonly applied to industrial production, in which raw materials are transformed into finished goods on a large scale...
, mining
Mining
Mining is the extraction of valuable minerals or other geological materials from the earth, from an ore body, vein or seam. The term also includes the removal of soil. Materials recovered by mining include base metals, precious metals, iron, uranium, coal, diamonds, limestone, oil shale, rock...
, construction
Construction
In the fields of architecture and civil engineering, construction is a process that consists of the building or assembling of infrastructure. Far from being a single activity, large scale construction is a feat of human multitasking...
, mechanic
Mechanic
A mechanic is a craftsman or technician who uses tools to build or repair machinery.Many mechanics are specialized in a particular field such as auto mechanics, bicycle mechanics, motorcycle mechanics, boiler mechanics, general mechanics, industrial maintenance mechanics , air conditioning and...
al, maintenance
Maintenance, Repair and Operations
Maintenance, repair, and operations or maintenance, repair, and overhaul involves fixing any sort of mechanical or electrical device should it become out of order or broken...
, technical installation and many other types of physical work. Often something is physically being built or maintained.

In contrast, the white-collar worker typically performs work in an office environment and may involve sitting at a computer or desk. A third type of work is a service worker whose labor is related to customer interaction, entertainment sales or other service oriented work. Pink collar
Pink Collar
Pink Collar is an ABC sitcom which just only pilot episode aired. It stars Alicia Silverstone, Charlotte Ross, Matt Malloy, and Ryan Michelle Bathe. TV-Pilot set in an accident insurance agency, Pink Collar talking about the lives of four woman as they juggle their ambitions, friendships, and...
workers are typically service workers. Many occupations blend blue, white and/or service industry categorizations.

Blue-collar work is often paid hourly wage-labor
Wage
A wage is a compensation, usually financial, received by workers in exchange for their labor.Compensation in terms of wages is given to workers and compensation in terms of salary is given to employees...
however some professionals may be paid by the project or salaried. There is a wide range of payscales for such work depending upon field of specialty and experience.

Industrial and manual workers often wear durable canvas or cotton clothing that may be dirtied during the course of their work. Navy and light blue colors conceal potential dirt or grease on the workers clothing helping him or her to appear cleaner. For the same reason blue is a popular color for coveralls which protect a workers clothing. Some blue collar workers have uniforms with the name of the business and/or the individual's name embroidered or printed on it.

Historically the popularity of the color blue among manual laborers contrast with the popularity of white dress shirts worn by men in office environments. The blue collar/white collar color scheme has socio-economic class
Social class
Social classes are economic or cultural arrangements of groups in society. Class is an essential object of analysis for sociologists, political scientists, economists, anthropologists and social historians. In the social sciences, social class is often discussed in terms of 'social stratification'...
connotations. However, this distinction has become blurred with the increasing importance of skilled labor, and the relative increase in low-paying, 'white collar jobs.

A higher level academic education is often not required for many blue-collar jobs. However, certain fields may require specialized training, licensing or certification as well as a high school diploma or GED
GED
General Educational Development tests are a group of five subject tests which, when passed, certify that the taker has American or Canadian high school-level academic skills...
.

With the information revolution Western nations
Western world
The Western world, also known as the West and the Occident , is a term referring to the countries of Western Europe , the countries of the Americas, as well all countries of Northern and Central Europe, Australia and New Zealand...
have moved towards a service and white collar economy. Many manufacturing jobs have been outsourced to developing nations which pay their workers lower wages. This outsourcing of jobs has pushed formerly agrarian nations to industrialized economies and concurrently decreased the number of blue-collar jobs in developed countries.

In the United States an area known as the Rust Belt
Rust Belt
The Rust Belt is a term that gained currency in the 1980s as the informal description of an area straddling the Midwestern and Northeastern United States, in which local economies traditionally garnered an increased manufacturing sector to add jobs and corporate profits...
comprising The Midwest, Western New York
Western New York
Western New York is the westernmost region of the state of New York. It includes the cities of Buffalo, Rochester, Niagara Falls, the surrounding suburbs, as well as the outlying rural areas of the Great Lakes lowlands, the Genesee Valley, and the Southern Tier. Some historians, scholars and others...
and Western Pennsylvania
Western Pennsylvania
Western Pennsylvania consists of the western third of the state of Pennsylvania in the United States. Pittsburgh is the largest city in the region, with a metropolitan area population of about 2.4 million people, and serves as its economic and cultural center. Erie, Altoona, and Johnstown are its...
, has seen its once large manufacturing base shrink significantly. With the de-industrialization of these areas starting in the mid 1960s cities like Cleveland, Ohio
Cleveland, Ohio
Cleveland is a city in the U.S. state of Ohio and is the county seat of Cuyahoga County, the most populous county in the state. The city is located in northeastern Ohio on the southern shore of Lake Erie, approximately west of the Pennsylvania border...
, Detroit, Michigan
Detroit, Michigan
Detroit is the major city among the primary cultural, financial, and transportation centers in the Metro Detroit area, a region of 5.2 million people. As the seat of Wayne County, the city of Detroit is the largest city in the U.S. state of Michigan and serves as a major port on the Detroit River...
, Buffalo, New York
Buffalo, New York
Buffalo is the second most populous city in the state of New York, after New York City. Located in Western New York on the eastern shores of Lake Erie and at the head of the Niagara River across from Fort Erie, Ontario, Buffalo is the seat of Erie County and the principal city of the...
, Niagara Falls, New York
Niagara Falls, New York
Niagara Falls is a city in Niagara County, New York, United States. As of the 2010 census, the city had a total population of 50,193, down from the 55,593 recorded in the 2000 census. It is across the Niagara River from Niagara Falls, Ontario , both named after the famed Niagara Falls which they...
and Saint Louis, Missouri, have experienced a steady decline of the blue-collar workforce and subsequent population decreases. Due to this economic osmosis, the rust belt has experienced high unemployment, poverty and urban blight.

"Blue-collar" can be used as an adjective to describe the environment of the blue-collar worker such as a "blue-collar" neighborhood, or restaurant
Restaurant
A restaurant is an establishment which prepares and serves food and drink to customers in return for money. Meals are generally served and eaten on premises, but many restaurants also offer take-out and food delivery services...
, bar
Bar (establishment)
A bar is a business establishment that serves alcoholic drinks — beer, wine, liquor, and cocktails — for consumption on the premises.Bars provide stools or chairs that are placed at tables or counters for their patrons. Some bars have entertainment on a stage, such as a live band, comedians, go-go...
;.
The source of this article is wikipedia, the free encyclopedia.  The text of this article is licensed under the GFDL.