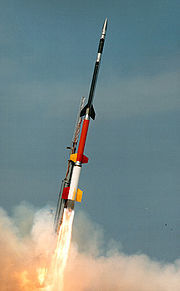 The Black Brant is a Canadian
Canada
Canada is a North American country consisting of ten provinces and three territories. Located in the northern part of the continent, it extends from the Atlantic Ocean in the east to the Pacific Ocean in the west, and northward into the Arctic Ocean...
-designed sounding rocket
Sounding rocket
A sounding rocket, sometimes called a research rocket, is an instrument-carrying rocket designed to take measurements and perform scientific experiments during its sub-orbital flight. The origin of the term comes from nautical vocabulary, where to sound is to throw a weighted line from a ship into...
built by Bristol Aerospace
Bristol Aerospace
Bristol Aerospace is a Canadian aerospace firm located in Winnipeg, Manitoba and is an operating division of Magellan Aerospace.-History:Bristol Aerospace began in 1930 as the MacDonald Brothers Aircraft Company. Brothers Jim and Grant MacDonald moved to Winnipeg from Nova Scotia in 1904 to start a...
in Winnipeg, Manitoba. Over 800 Black Brants of various versions have been launched since they were first produced in 1961, and the type remains one of the most popular sounding rockets ever built. They have been repeatedly used by the Canadian Space Agency and NASA
NASA
The National Aeronautics and Space Administration is the agency of the United States government that is responsible for the nation's civilian space program and for aeronautics and aerospace research...
.

Black Brant was the result of research at CARDE
Cardè
Cardè is a comune in the Province of Cuneo in the Italian region Piedmont, located about 40 km southwest of Turin and about 40 km north of Cuneo. As of 31 December 2004, it had a population of 1,077 and an area of 19.3 km²....
during the 1950s into the nature of the upper atmosphere
Earth's atmosphere
The atmosphere of Earth is a layer of gases surrounding the planet Earth that is retained by Earth's gravity. The atmosphere protects life on Earth by absorbing ultraviolet solar radiation, warming the surface through heat retention , and reducing temperature extremes between day and night...
as part of ongoing research into anti-ballistic missile
Anti-ballistic missile
An anti-ballistic missile is a missile designed to counter ballistic missiles .A ballistic missile is used to deliver nuclear, chemical, biological or conventional warheads in a ballistic flight trajectory. The term "anti-ballistic missile" describes any antimissile system designed to counter...
systems and very-long-range communication. In 1957 CARDE contracted Bristol to produce a simple rocket
Rocket
A rocket is a missile, spacecraft, aircraft or other vehicle which obtains thrust from a rocket engine. In all rockets, the exhaust is formed entirely from propellants carried within the rocket before use. Rocket engines work by action and reaction...
fuselage
Fuselage
The fuselage is an aircraft's main body section that holds crew and passengers or cargo. In single-engine aircraft it will usually contain an engine, although in some amphibious aircraft the single engine is mounted on a pylon attached to the fuselage which in turn is used as a floating hull...
, called the Propulsion Test Vehicle, for studies into high-power solid fuels. The resulting design, by Albert Fia
Albert Fia
Albert Fia was a Canadian engineer who developed the Black Brant rocket. He was known as the "father of Canadian rocketry".Born in Lethbridge, Alberta, he joined Bristol Aerospace in 1958 rising to become vice-president....
, was quite heavy, as it was designed to be able to accommodate a wide variety of engine burning times, propellant loadings and launch angles in keeping with its role as a test vehicle for ABM systems development. The first test flight took place only two years later from Fort Churchill
Fort Churchill (rocket launch site)
Fort Churchill is a rocket launching complex located in Churchill, Manitoba. The site has been used on and off since the mid-1950s for sub-orbital launches of various sounding rockets during several major studies...
in September 1959.

CARDE's attention later turned to long-distance communications and they found the Propulsion Test Vehicle system useful as a sounding rocket
Sounding rocket
A sounding rocket, sometimes called a research rocket, is an instrument-carrying rocket designed to take measurements and perform scientific experiments during its sub-orbital flight. The origin of the term comes from nautical vocabulary, where to sound is to throw a weighted line from a ship into...
. To better suit this role, Bristol modified the design to be lighter and more tailored to the sounding rocket role. This became the Black Brant. CARDE launched a number of Black Brant rockets over the next few years, both the original Black Brant I design which could place a 150 lb (68 kg) payload to 150 km altitude, as well as the larger Black Brant II which first flew in October 1960, and the smaller but higher-altitude Black Brant III.

In July 1963 the much larger Black Brant V first flew, which was also used as a booster stage for the Black Brant III to make the Black Brant IV. The IV first flew in 1964, but failed, as did the next test launch. Aside from these two launches, which were corrected for, the Black Brant has never had another failure, making it one of the most reliable rockets in history. Since then it has undergone continual evolution, and the current versions are the XI and XII, consisting of Black Brant V used as an upper stage, with Talos
RIM-8 Talos
The Bendix RIM-8 Talos was a long-range naval surface-to-air missile, and was among the earliest surface-to-air missiles to equip United States Navy ships. The Talos used radar beam riding for guidance to the vicinity of its target, and semiactive radar homing for terminal guidance...
and Terrier
RIM-2 Terrier
The Convair RIM-2 Terrier was a two-stage medium-range naval surface-to-air missile , and was among the earliest surface-to-air missiles to equip United States Navy ships. Originally, the Terrier had a launch thrust of 23 kN , and weight of 1392 kg...
boosters as lower stages. They have reached altitudes of more than 1,500 km, which is above the ionosphere
Ionosphere
The ionosphere is a part of the upper atmosphere, comprising portions of the mesosphere, thermosphere and exosphere, distinguished because it is ionized by solar radiation. It plays an important part in atmospheric electricity and forms the inner edge of the magnetosphere...
and well above the orbits of the Space Shuttle
Space Shuttle
The Space Shuttle was a manned orbital rocket and spacecraft system operated by NASA on 135 missions from 1981 to 2011. The system combined rocket launch, orbital spacecraft, and re-entry spaceplane with modular add-ons...
and the International Space Station
International Space Station
The International Space Station is a habitable, artificial satellite in low Earth orbit. The ISS follows the Salyut, Almaz, Cosmos, Skylab, and Mir space stations, as the 11th space station launched, not including the Genesis I and II prototypes...
.

The propellant designs developed by CARDE in the Black Brant program were the highest performing solid fuels of their day. Bristol then placed this propellant in a new 2.75 in (70 mm) rocket to form the CRV7
CRV7
The CRV7, short for "Canadian Rocket Vehicle 7", is a 2.75 inch folding-fin ground attack rocket produced by Bristol Aerospace in Winnipeg, Manitoba. It was introduced in the early 1970s as an upgraded version of the standard US 2.75 inch air-to-ground rockets...
, the first rocket capable of penetrating standard Warsaw Pact
Warsaw Pact
The Warsaw Treaty Organization of Friendship, Cooperation, and Mutual Assistance , or more commonly referred to as the Warsaw Pact, was a mutual defense treaty subscribed to by eight communist states in Eastern Europe...
aircraft hangars. The CRV7 has since gone on to become the de-facto standard rocket for most Western-aligned militaries.

In present day, due to its 98% success rate, it remains one of the most popular sounding rockets ever built. The rockets have been used repeatedly by the Canadian Space Agency and NASA. There is a 1:1 scale model of the Black Brant 9 rocket in front of the head office of the Canadian Space Agency in Saint-Hubert, south of Montreal
Montreal
Montreal is a city in Canada. It is the largest city in the province of Quebec, the second-largest city in Canada and the seventh largest in North America...
.

On September 19, 2009, a Black Brant XII that was launched to study clouds caused numerous calls from the northeastern U.S. reporting "strange lights in the sky". NASA reported that the light came from an artificial noctilucent cloud
Noctilucent cloud
Night clouds or Noctilucent clouds are tenuous cloud-like phenomena that are the "ragged-edge" of a much brighter and pervasive polar cloud layer called polar mesospheric clouds in the upper atmosphere, visible in a deep twilight. They are made of crystals of water ice. The name means roughly night...
formed by the exhaust particles of the rocket's fourth stage at an altitude of about 173 mi (278.4 km).