Encyclopedia
Big Hole National Battlefield is a memorial located in Montana
Montana
Montana is a state in the Western United States. The western third of Montana contains numerous mountain ranges. Smaller, "island ranges" are found in the central third of the state, for a total of 77 named ranges of the Rocky Mountains. This geographical fact is reflected in the state's name,...
, United States
United States
The United States of America is a federal constitutional republic comprising fifty states and a federal district...
. The Nez Percé, under Chief Joseph
Chief Joseph
Hin-mah-too-yah-lat-kekt, popularly known as Chief Joseph, or Young Joseph was the leader of the Wal-lam-wat-kain band of Nez Perce during General Oliver O. Howard's attempt to forcibly remove his band and the other "non-treaty" Nez Perce to a reservation in Idaho...
(although this is the popular American belief, they were led at this time by Looking Glass. During the battle Chief Joseph rescued the tribes horse herd from being captured by U.S. cavalry.) fought a delaying action against the 7th Infantry Regiment (United States)
7th Infantry Regiment (United States)
The United States Army's 7th Infantry Regiment, known as "The Cottenbalers" from an incident that occurred during the Battle of New Orleans, while under the command of Andrew Jackson, when soldiers of the 7th Infantry Regiment held positions behind a breastwork of bales of cotton during the...
here on August 9 and 10, 1877, during their failed attempt to escape to Canada
Canada
Canada is a North American country consisting of ten provinces and three territories. Located in the northern part of the continent, it extends from the Atlantic Ocean in the east to the Pacific Ocean in the west, and northward into the Arctic Ocean...
. This action, the Battle of the Big Hole
Battle of the Big Hole
The Battle of the Big Hole was a costly battle in the Montana Territory between the Nez Percé and United States army during the Nez Perce War of 1877.-Background:...
, was the largest battle fought between the Nez Percé and U.S. Government forces in the five month conflict known as the Nez Perce War
Nez Perce War
The Nez Perce War was an armed conflict between the Nez Perce and the United States government fought in 1877 as part of the American Indian Wars. After a series of battles in which both the U.S. Army and native people sustained significant casualties, the Nez Perce surrendered and were relocated...
. The park was made a part of Nez Perce National Historical Park
Nez Perce National Historical Park
The Nez Perce National Historical Park is a United States National Historical Park comprising 38 sites located throughout the states of Idaho, Montana, Oregon, and Washington which are the traditional aboriginal lands of the Nez Perce. The sites commemorate the history, culture, and stories of the...
in 1992 which consists of 38 separate locations in five different states, following the flight of the Nez Percé tribe from the U.S. Cavalry.

Big Hole National Battlefield is located on 655 acres (265.1 ha), 10 miles (16 km) west of Wisdom, Montana on Montana state highway 43. A year round visitor center is located in the park. 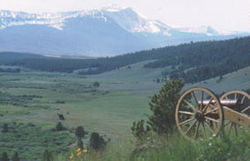 The Nez Perce homeland territory was in the states now known as Oregon
Oregon
Oregon is a state in the Pacific Northwest region of the United States. It is located on the Pacific coast, with Washington to the north, California to the south, Nevada on the southeast and Idaho to the east. The Columbia and Snake rivers delineate much of Oregon's northern and eastern...
, Washington and Idaho
Idaho
Idaho is a state in the Rocky Mountain area of the United States. The state's largest city and capital is Boise. Residents are called "Idahoans". Idaho was admitted to the Union on July 3, 1890, as the 43rd state....
. In 1873, Chief Joseph negotiated with the federal government to ensure his people could stay on their land in the Wallowa Valley as stipulated in 1855 and 1863 land treaties with the U.S. government. But, in a reversal of policy in 1877, General Oliver O. Howard threatened to attack if the Indians did not relocate to an Idaho reservation
Indian reservation
An American Indian reservation is an area of land managed by a Native American tribe under the United States Department of the Interior's Bureau of Indian Affairs...
that was only a small fraction of their original territory. Chief Joseph reluctantly agreed. As they began their journey to Idaho, Chief Joseph learned that three young Nez Percé men, enraged at the loss of their homeland, had massacred a band of white settlers. Fearing U.S. Army retaliation, Chief Joseph decided that the best way to avoid the official U.S. Government policy of forcing Native Americans onto reservations was to escape to Canada
Canada
Canada is a North American country consisting of ten provinces and three territories. Located in the northern part of the continent, it extends from the Atlantic Ocean in the east to the Pacific Ocean in the west, and northward into the Arctic Ocean...
, where he believed that his people would be treated differently and they could unite with Sitting Bull
Sitting Bull
Sitting Bull Sitting Bull Sitting Bull (Lakota: Tȟatȟáŋka Íyotake (in Standard Lakota Orthography), also nicknamed Slon-he or "Slow"; (c. 1831 – December 15, 1890) was a Hunkpapa Lakota Sioux holy man who led his people as a tribal chief during years of resistance to United States government policies...
, leader of a band of Lakota there.

Six weeks after leaving their homeland, U.S. Cavalry forces performed a predawn attack on the 800 men, women and children encamped at Big Hole. The Nez Perce mounted a fierce resistance and managed to overwhelm the attacking force, cornering them on a hillside. Meanwhile, the women and children fled the battlefield after burying their dead. During the day and a half battle, the Nez Perce lost an estimated 60 to 90 men, women and children, although it is believed that actual losses may have been much higher with a good portion being women and children. U.S. forces lost 28 and an additional 40 serious casualties. The confrontation was the most violent battle between the Nez Perce and the U.S. Government forces. After the battle they fled east through Yellowstone National Park
Yellowstone National Park
Yellowstone National Park, established by the U.S. Congress and signed into law by President Ulysses S. Grant on March 1, 1872, is a national park located primarily in the U.S. state of Wyoming, although it also extends into Montana and Idaho...
, then the Nez Perce headed north. In October 1877, the starving and exhausted Nez Percé surrendered to the U.S. Forces commanded by General Oliver O. Howard, in Montana's Bear Paw Mountains
Bear Paw Mountains
The Bear Paw Mountains are an insular-montane island range in North-Central Montana, USA, located approximately 10 miles south of Havre, Montana...
, only 40 miles (64.4 km) from the Canadian border. Approximately 150 Nez Perce managed to escape to Canada prior to the surrender. Upon the final surrender by Chief Joseph he was quoted as saying ,"Hear me, my chiefs! I am tired. My heart is sick and sad. From where the sun now stands I will fight no more forever".