The museum was founded in 1903 by Zenas Crane, grandson of the founder of paper-maker Crane & Company
Crane Paper Company
Crane & Co., based in Dalton, Massachusetts, is a manufacturer of cotton-based paper products used in the printing of national currencies, passports and banknotes as well as in social, business, industrial and technical applications. Crane remains the predominant supplier of paper for use in U.S...
, under the auspices of the Berkshire Athenaeum
Berkshire Athenaeum
The Berkshire Athenaeum is a public library based on a previously private athenaeum, and now located at 1 Wendell Avenue, Pittsfield, Massachusetts in the Berkshires, USA. Like many New England libraries, the Berkshire Athenaeum started as a private organization.A private Public Library...
. The vision was to create an educational community museum for all ages. The museum became independent in 1932. 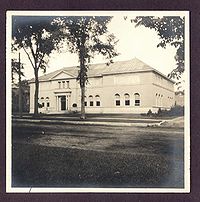 Today the museum includes galleries on art
Art
Art is the product or process of deliberately arranging items in a way that influences and affects one or more of the senses, emotions, and intellect....
, ancient civilization, and natural science
Natural science
The natural sciences are branches of science that seek to elucidate the rules that govern the natural world by using empirical and scientific methods...
including a gallery of dinosaurs and paleontology
Paleontology
Paleontology "old, ancient", ὄν, ὀντ- "being, creature", and λόγος "speech, thought") is the study of prehistoric life. It includes the study of fossils to determine organisms' evolution and interactions with each other and their environments...
and a mineral
Mineral
A mineral is a naturally occurring solid chemical substance formed through biogeochemical processes, having characteristic chemical composition, highly ordered atomic structure, and specific physical properties. By comparison, a rock is an aggregate of minerals and/or mineraloids and does not...
gallery. It has a notable collection of Hudson River school
Hudson River school
The Hudson River School was a mid-19th century American art movement embodied by a group of landscape painters whose aesthetic vision was influenced by romanticism...
paintings, as well as a work by Norman Rockwell
Norman Rockwell
Norman Percevel Rockwell was a 20th-century American painter and illustrator. His works enjoy a broad popular appeal in the United States for their reflection of American culture. Rockwell is most famous for the cover illustrations of everyday life scenarios he created for The Saturday Evening...
, portraits by John Singleton Copley
John Singleton Copley
John Singleton Copley was an American painter, born presumably in Boston, Massachusetts, and a son of Richard and Mary Singleton Copley, both Irish. He is famous for his portrait paintings of important figures in colonial New England, depicting in particular middle-class subjects...
, Charles Willson Peale
Charles Willson Peale
Charles Willson Peale was an American painter, soldier and naturalist. He is best remembered for his portrait paintings of leading figures of the American Revolution, as well as establishing one of the first museums....
, and John Singer Sargent
John Singer Sargent
John Singer Sargent was an American artist, considered the "leading portrait painter of his generation" for his evocations of Edwardian era luxury. During his career, he created roughly 900 oil paintings and more than 2,000 watercolors, as well as countless sketches and charcoal drawings...
, and kinetic toy sculptures by Alexander Calder
Alexander Calder
Alexander Calder was an American sculptor and artist most famous for inventing mobile sculptures. In addition to mobile and stable sculpture, Alexander Calder also created paintings, lithographs, toys, tapestry, jewelry and household objects.-Childhood:Alexander "Sandy" Calder was born in Lawnton,...
. There is also an aquarium
Aquarium
An aquarium is a vivarium consisting of at least one transparent side in which water-dwelling plants or animals are kept. Fishkeepers use aquaria to keep fish, invertebrates, amphibians, marine mammals, turtles, and aquatic plants...
. The museum is able to offer a wide array all within one collection.

The Ellen Crane Memorial Sculpture Gallery presents neoclassical sculpture
Neoclassical sculpture
Neoclassical sculpture was a sculptural style of the 18th and 19th centuries. The neoclassical period was one of the great ages of public sculpture, though its "classical" prototypes were more likely to be Roman copies of Hellenistic sculptures. The neoclassical sculptors paid homage to an idea of...
s, mainly in marble
Marble
Marble is a metamorphic rock composed of recrystallized carbonate minerals, most commonly calcite or dolomite.Geologists use the term "marble" to refer to metamorphosed limestone; however stonemasons use the term more broadly to encompass unmetamorphosed limestone.Marble is commonly used for...
, by sculptors including Giovanni Maria Benzoni
Giovanni Maria Benzoni
Giovanni Maria Benzoni was an Italian neoclassical sculptor. He was trained in Rome, where he later set up his own workshop....
(1809–1873), Anna Hyatt Huntington
Anna Hyatt Huntington
Anna Vaughn Hyatt Huntington was an American sculptor.-Life and career:Huntington was born in Cambridge, Massachusetts. Her father, Alpheus Hyatt, was a professor of paleontology and zoology at Harvard University and MIT, and served as a contributing factor to her early interest in animals and...
(1876–1973), Randolph Rogers
Randolph Rogers
Randolph Rogers was an American sculptor. He was a prolific sculptor of subjects related to the American Civil War and other historical themes.-Biography:...
(1825–1892), Franklin Simmons
Franklin Simmons
Franklin Bachelder Simmons was a prominent American sculptor of the nineteenth century....
(1839–1913) and Giulio Tadolini
Giulio Tadolini
Giulio Tadolini was an Academic-trained Italian sculptor, who was born and died in Rome, where he passed his career in the family atelier, which he inherited from his uncle, Adamo Tadolini...
(1849–1918).

The Feigenbaum Hall of Innovation opened in March 2008. This new hall falls in line with the museum's traditional "curiosity cabinet" appeal and is dedicated to local innovators.