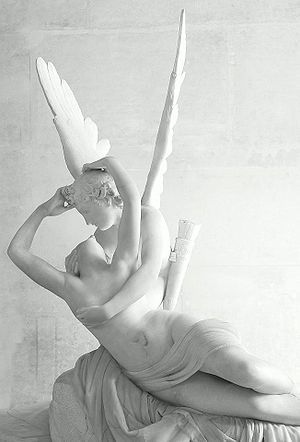 Neoclassical sculpture was a sculptural
Sculpture
Sculpture is three-dimensional artwork created by shaping or combining hard materials—typically stone such as marble—or metal, glass, or wood. Softer materials can also be used, such as clay, textiles, plastics, polymers and softer metals...
style of the 18th and 19th centuries. The neoclassical
Neoclassicism
Neoclassicism is the name given to Western movements in the decorative and visual arts, literature, theatre, music, and architecture that draw inspiration from the "classical" art and culture of Ancient Greece or Ancient Rome...
period (c.1750-1850) was one of the great ages of public sculpture, though its "classical" prototypes were more likely to be Roman copies of Hellenistic sculptures. The neoclassical sculptors paid homage to an idea of the generation of Pheidias. They ignored both Archaic Greek art and the works of Late Antiquity.

The most familiar representatives are the Italian Antonio Canova
Antonio Canova
Antonio Canova was an Italian sculptor from the Republic of Venice who became famous for his marble sculptures that delicately rendered nude flesh...
, the Englishman John Flaxman
John Flaxman
John Flaxman was an English sculptor and draughtsman.-Early life:He was born in York. His father was also named John, after an ancestor who, according to family tradition, had fought for Parliament at the Battle of Naseby, and afterwards settled as a carrier or farmer in Buckinghamshire...
and the Dane Bertel Thorvaldsen
Bertel Thorvaldsen
Bertel Thorvaldsen was a Danish-Icelandic sculptor of international fame, who spent most of his life in Italy . Thorvaldsen was born in Copenhagen into a Danish/Icelandic family of humble means, and was accepted to the Royal Academy of Arts when he was eleven years old...
. The European neoclassical manner also took hold in the United States, where its pinnacle occurred somewhat later and is exemplified in the sculptures of Hiram Powers
Hiram Powers
Hiram Powers was an American neoclassical sculptor.-Biography:The son of a farmer, Powers was born in Woodstock, Vermont, on the July 29, 1805. In 1818 his father moved to Ohio, about six miles from Cincinnati, where the son attended school for about a year, staying meanwhile with his brother, a...
, Randolph Rogers
Randolph Rogers
Randolph Rogers was an American sculptor. He was a prolific sculptor of subjects related to the American Civil War and other historical themes.-Biography:...
, William Henry Rinehart
William Henry Rinehart
William Henry Rinehart was a noted American sculptor. He is considered "the last important American sculptor to work in the classical style."-Biography:...
and others.
The source of this article is wikipedia, the free encyclopedia.  The text of this article is licensed under the GFDL.