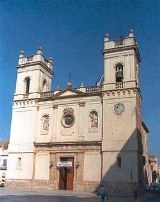 Encyclopedia
Benifaió is a municipality
Municipalities of Spain
The municipalities of Spain In other languages of Spain:*Catalan/Valencian , sing. municipi.*Galician or , sing. municipio/bisbarra.*Basque , sing. udalerria. are the basic level of Spanish local government...
in the comarca of Ribera Alta
Ribera Alta (comarca)
Ribera Alta is a comarca in the province of Valencia, Valencian Community, Spain.-Municipalities:*Alberic*Alcàntera de Xúquer*L'Alcúdia*Alfarb*Algemesí*Alginet*Alzira*Antella*Beneixida*Benifaió*Benimodo*Benimuslem*Carcaixent*Càrcer*Carlet...
in the Valencian Community
Valencian Community
The Valencian Community is an autonomous community of Spain located in central and south-eastern Iberian Peninsula. Its capital and largest city is Valencia...
, Spain
Spain
Spain , officially the Kingdom of Spain languages]] under the European Charter for Regional or Minority Languages. In each of these, Spain's official name is as follows:;;;;;;), is a country and member state of the European Union located in southwestern Europe on the Iberian Peninsula...
.
In the central plaza, it contains a tower built by the Moors

Benifaió is twinned
Town twinning
Twin towns and sister cities are two of many terms used to describe the cooperative agreements between towns, cities, and even counties in geographically and politically distinct areas to promote cultural and commercial ties.- Terminology :...
with:
Weiler-Simmerberg
Weiler-Simmerberg
Weiler-Simmerberg is a market town in the Swabian Lindau district.-Geography:Being located in the Westallgäu, the market town is bordering on the region of the Bregenzerwald, which already belongs to the Austrian administrative region of Vorarlberg...
in Bavaria
Bavaria
Bavaria, formally the Free State of Bavaria is a state of Germany, located in the southeast of Germany. With an area of , it is the largest state by area, forming almost 20% of the total land area of Germany...
, Germany
Germany
Germany , officially the Federal Republic of Germany , is a federal parliamentary republic in Europe. The country consists of 16 states while the capital and largest city is Berlin. Germany covers an area of 357,021 km2 and has a largely temperate seasonal climate...
(since 2004-2005) Valmontone
Valmontone
Valmontone is a comune in the Province of Rome in the Italian region Lazio, located about 45 km southeast of Rome.-Geography:...
in Latium
Latium
Lazio is one of the 20 administrative regions of Italy, situated in the central peninsular section of the country. With about 5.7 million residents and a GDP of more than 170 billion euros, Lazio is the third most populated and the second richest region of Italy...
, Italy
Italy
Italy , officially the Italian Republic languages]] under the European Charter for Regional or Minority Languages. In each of these, Italy's official name is as follows:;;;;;;;;), is a unitary parliamentary republic in South-Central Europe. To the north it borders France, Switzerland, Austria and...
The source of this article is wikipedia, the free encyclopedia.  The text of this article is licensed under the GFDL.