Encyclopedia
Weiler-Simmerberg is a market town
Market town
Market town or market right is a legal term, originating in the medieval period, for a European settlement that has the right to host markets, distinguishing it from a village and city...
in the Swabian
Swabian
Swabian may refer:* to the German region of Swabia ; or* to Swabian German, a dialect spoken in Baden-Württemberg in south-west Germany and adjoining areas See also:...
Lindau district
Lindau (district)
Lindau is a Landkreis or rural district in Bavaria, Germany; its capital is the city of Lindau. It is bounded by the district of Oberallgäu, Austria , Lake Constance and the state of Baden-Württemberg .-History:The city of Lindau became a Free Imperial City in the 13th century; it was...
.

Being located in the Westallgäu
Westallgäu
Westallgäu is the western part of the Allgäu in Germany. It contains large parts of the districts of Lindau in the south west of the region, Swabia in Bavaria and the district of Ravensburg in the south east of Baden-Württemberg. Westallgäu extends to the north to, amongst others, the towns of...
, the market town is bordering on the region of the Bregenzerwald
Bregenzerwald
Bregenzerwald is one of the main regions in the state of Vorarlberg, Austria. Geologically, the Bregenzerwald is a mountain range of the Northern Limestone Alps, specifically the northern flysch zone. It is the drainage basin of the Bregenzer Ach river....
, which already belongs to the Austria
Austria
Austria , officially the Republic of Austria , is a landlocked country of roughly 8.4 million people in Central Europe. It is bordered by the Czech Republic and Germany to the north, Slovakia and Hungary to the east, Slovenia and Italy to the south, and Switzerland and Liechtenstein to the...
n administrative region of Vorarlberg
Vorarlberg
Vorarlberg is the westernmost federal-state of Austria. Although it is the second smallest in terms of area and population , it borders three countries: Germany , Switzerland and Liechtenstein...
. The Hausbachklamm belongs to the prominent landmarks and sights of Weiler-Simmerberg, as well as the Enschenstein and the Wildrosenmoos. Even though the landscape is rather mild, there are many very cliffy and steep rock faces due to the irregular bedding of sandstone and conglomerate.


Parts of the municipality

The following districts belong to the market town of Weiler-Simmerberg: 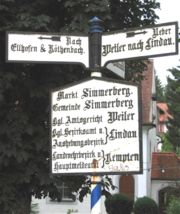 The municipality celebrated the 1.111th anniversary of its first mentioning in 2005.
The market town of Weiler-Simmerberg had been seat of a higher and lower court before 1805 and belonged to the Austrian authority of Bregenz-Hohenegg. Since the signing of the peace treaties of Brünn und Preßburg
Bratislava
Bratislava is the capital of Slovakia and, with a population of about 431,000, also the country's largest city. Bratislava is in southwestern Slovakia on both banks of the Danube River. Bordering Austria and Hungary, it is the only national capital that borders two independent countries.Bratislava...
in 1805, the town belongs to Bavaria. In the course of the administrative reforms in Bavaria, the contemporary municipality was formed by the "Gemeindeedikt" of 1818.