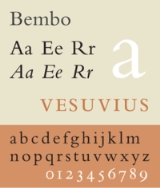 Encyclopedia
Bembo is the name given to a 20th-century revival of an old style serif or humanist typeface
Typeface
In typography, a typeface is the artistic representation or interpretation of characters; it is the way the type looks. Each type is designed and there are thousands of different typefaces in existence, with new ones being developed constantly....
cut by Francesco Griffo
Francesco Griffo
Francesco Griffo , also called Francesco da Bologna, was a fifteenth-century Venetian punchcutter. He worked for Aldus Manutius, designing that printer's more important typefaces, including the first italic type...
around 1495.

The typeface Bembo seen today is a revival designed under the direction of Stanley Morison
Stanley Morison
Stanley Morison was an English typographer, designer and historian of printing.Born in Wanstead, Essex, Morison spent most of his childhood and early adult years at the family home in Fairfax Road, Harringay...
for the Monotype Corporation
Monotype Corporation
Monotype Imaging Holdings is a Delaware corporation based in Woburn, Massachusetts and specializing in typesetting and typeface design as well as text and imaging solutions for use with consumer electronics devices. Monotype Imaging Holdings is the owner of Monotype Imaging Inc., Linotype,...
in 1929.

It is considered a good choice for expressing classic beauty or formal tradition in typographical design and is generally held to be a good book face.

Characteristics of this typeface are the following:

lower case:
square dot over the letter i.
double-storey a.

upper case:
the capital Q's tail is centered under the figure, the uppercase J has a slight hook, and there are two versions of uppercase R, one with a straight tail and one with a curved tail.

Bembo is a classic typeface that displays the characteristics that identify Old Style, humanist designs:

Griffo cut punches
Punchcutting
In traditional typography, punchcutting is the craft of cutting letter punches in steel from which matrices were made in copper for type founding in the letterpress era. Cutting punches and casting type was the first step of traditional typesetting. The cutting of letter punches was a highly...
for the Venetian press of the humanist printer Aldus Manutius
Aldus Manutius
Aldus Pius Manutius , the Latinised name of Aldo Manuzio —sometimes called Aldus Manutius, the Elder to distinguish him from his grandson, Aldus Manutius, the Younger—was an Italian humanist who became a printer and publisher when he founded the Aldine Press at Venice.His publishing legacy includes...
. The face was first used in February 1496 (1495 more veneto), in the setting of a book entitled Petri Bembi de Aetna Angelum Chalabrilem liber, a 60-page text about a journey to Mount Aetna written by the young Italian humanist poet Pietro Bembo
Pietro Bembo
Pietro Bembo was an Italian scholar, poet, literary theorist, and cardinal. He was an influential figure in the development of the Italian language, specifically Tuscan, as a literary medium, and his writings assisted in the 16th-century revival of interest in the works of Petrarch...
, later a Cardinal and secretary to Pope Leo X.

A second version of the roman face followed in 1499 and this type was used to print the famous illustrated Hypnerotomachia Poliphili
Hypnerotomachia Poliphili
Hypnerotomachia Poliphili , called in English Poliphilo's Strife of Love in a Dream, is a romance said to be by Francesco Colonna and a famous example of early printing...
. This typeface served as a source of inspiration for typefaces of the Parisian typefounder Claude Garamond
Claude Garamond
Claude Garamond was a French publisher from Paris. He was one of the leading type designers of his time, and is credited with the introduction of the apostrophe, the accent and the cedilla to the French language. Several contemporary typefaces, including those currently known as Garamond, Granjon,...
, for Voskens and many others, which were themselves the sources for Caslon
Caslon
Caslon refers to a number of serif typefaces designed by William Caslon I , and various revivals thereof.Caslon shares the irregularity characteristic of Dutch Baroque types. It is characterized by short ascenders and descenders, bracketed serifs, moderately-high contrast, robust texture, and...
types and many other European types of the sixteenth and seventeenth centuries.

Griffo was the first punch-cutter to fully express the character of the humanist hand that contemporaries preferred for manuscripts of classics and literary texts, in distinction to the book hand humanists dismissed as a gothic hand
Blackletter
Blackletter, also known as Gothic script, Gothic minuscule, or Textura, was a script used throughout Western Europe from approximately 1150 to well into the 17th century. It continued to be used for the German language until the 20th century. Fraktur is a notable script of this type, and sometimes...
or the everyday chancery hand
Chancery hand
The term "chancery hand" can refer to one of two very different styles of historical handwriting.A chancery hand was at first a form of handwriting for business transactions that developed in the Lateran chancelry of the thirteenth century, then spread to France, notably through the Avignon...
. The typeface called Bembo has a calligraphic
Calligraphy
Calligraphy is a type of visual art. It is often called the art of fancy lettering . A contemporary definition of calligraphic practice is "the art of giving form to signs in an expressive, harmonious and skillful manner"...
feel that is particularly evident in the serifs. It has a delicate transitional curve that rises up into the stem of each letter. Many lowercase letters exhibit hints of sinuous curves reminiscent of those generated by hand-drawn letters; the termination of the arm of both the r and the e flare slightly upward and outward. The lowercase c has a subtle forward slant, a reversal of the oblique stress of the o. Characters h, m, and n have a slight returned curve on their final stem. Lowercase italic k has an elegantly curved stroke in the lower-right. One of the main characteristic that distinguished Griffo's types from earlier Venetian forms is the way in which the ascenders of the lowercase letters stand taller than the capitals. An infant variety also exists, which contains single-story versions of the letters A and G.

According to the authors of Typographic Specimens: The Great Typefaces, Bembo is noted for its ability to "provide a text that is extremely consistent in color and texture," helping it to "remain one of the most popular book types since its release."

Monotype Bembo is generally regarded as one of the most handsome revivals of Aldus Manutius’s 15th-century roman type. However there is no italic cut with it. The rumor goes that Stanley Morison
Stanley Morison
Stanley Morison was an English typographer, designer and historian of printing.Born in Wanstead, Essex, Morison spent most of his childhood and early adult years at the family home in Fairfax Road, Harringay...
commissioned Alfred Fairbank (Born: Grimsby, United Kingdom, 1895, Died: Hove, Sussex, 1982), a renowned calligrapher, to design an italic for Bembo. This was released in metal type in 1929, but Fairbank claimed that he made the design independently and sold the drawings to Monotype.

Fairbank’s design—although very beautiful—was, however, not used at first with the Bembo roman. A more conventional italic was cut by Monotype and used to complete to the Bembo font-family.

Fairbank’s first design, which was based on the work of 16th-century writing master Ludovico degli Arrighi, was, however, made available in 4 sizes, named Bembo Condensed Italic.

More recently, Bembo is the typeface used for volumes in the Everyman's Library
Everyman's Library
Everyman's Library is a series of reprinted classic literature currently published in hardback by Random House. It was originally an imprint of J. M. Dent , who continue to publish Everyman Classics in paperback.J. M. Dent and Company began to publish the series in 1906...
series. It is also the principal typeface in the Rough Guides
Rough Guides
Rough Guides Ltd is a travel guidebook and reference publisher, owned by Pearson PLC. Their travel titles cover more than 200 destinations, and are distributed worldwide through the Penguin Group...
series of travel books.