Encyclopedia
The Bell XV-15 was an American tiltrotor
Tiltrotor
A tiltrotor is an aircraft which uses a pair or more of powered rotors mounted on rotating shafts or nacelles at the end of a fixed wing for lift and propulsion, and combines the vertical lift capability of a helicopter with the speed and range of a conventional fixed-wing aircraft...
VTOL
VTOL
A vertical take-off and landing aircraft is one that can hover, take off and land vertically. This classification includes fixed-wing aircraft as well as helicopters and other aircraft with powered rotors, such as cyclogyros/cyclocopters and tiltrotors...
aircraft. It was the second successful experimental tiltrotor aircraft and the first to demonstrate the concept's high speed performance relative to conventional helicopters.

The idea of building Vertical Take-Off and Landing
VTOL
A vertical take-off and landing aircraft is one that can hover, take off and land vertically. This classification includes fixed-wing aircraft as well as helicopters and other aircraft with powered rotors, such as cyclogyros/cyclocopters and tiltrotors...
aircraft using helicopter-like rotors at the wingtips originated in the 1930s. The first design resembling modern tiltrotors was patented by George Lehberger in May 1930, but he did not further develop the concept. In World War II
World War II
World War II, or the Second World War , was a global conflict lasting from 1939 to 1945, involving most of the world's nations—including all of the great powers—eventually forming two opposing military alliances: the Allies and the Axis...
, a German
Germany
Germany , officially the Federal Republic of Germany , is a federal parliamentary republic in Europe. The country consists of 16 states while the capital and largest city is Berlin. Germany covers an area of 357,021 km2 and has a largely temperate seasonal climate...
prototype
Prototype
A prototype is an early sample or model built to test a concept or process or to act as a thing to be replicated or learned from.The word prototype derives from the Greek πρωτότυπον , "primitive form", neutral of πρωτότυπος , "original, primitive", from πρῶτος , "first" and τύπος ,...
, called the Focke-Achgelis
Focke-Achgelis
Focke-Achgelis & Co. G.m.b.H. was a German helicopter company founded in 1937 by Henrich Focke and Gerd Achgelis.-History:In 1936 Focke had been ousted from the Focke-Wulf company he had cofounded in 1924 by shareholder pressure...
FA-269 was developed starting in 1942, but never flew.

Two prototypes which made it to flight were the one-seat Transcendental Model 1-G and two-seat Transcendental Model 2, both powered by single reciprocating engines. Development started on the Model 1-G in 1947 and it flew in 1954. The Model 1-G flew until a crash in Chesapeake Bay
Chesapeake Bay
The Chesapeake Bay is the largest estuary in the United States. It lies off the Atlantic Ocean, surrounded by Maryland and Virginia. The Chesapeake Bay's drainage basin covers in the District of Columbia and parts of six states: New York, Pennsylvania, Delaware, Maryland, Virginia, and West...
on 20 July 1955, destroying the prototype aircraft but not seriously injuring the pilot. The Transcendental 1-G is the first tiltrotor aircraft to have flown and accomplished most of a helicopter to aircraft transition in flight (to within 10 degrees of true horizontal aircraft flight). The Model 2 was developed and flew shortly afterward, but did not fly much beyond hover tests. The US Air Force withdrew funding in favor of the Bell XV-3.

The Bell XV-3
Bell XV-3
|-See also:- References :NotesBibliography*Markman, Steve, and William G. Holder. Straight Up: A History of Vertical Flight. Schiffer military/aviation history. Atglen, PA: Schiffer Pub, 2000....
was first flown in 1955. Like its predecessors, the XV-3 had the engines in the fuselage
Fuselage
The fuselage is an aircraft's main body section that holds crew and passengers or cargo. In single-engine aircraft it will usually contain an engine, although in some amphibious aircraft the single engine is mounted on a pylon attached to the fuselage which in turn is used as a floating hull...
and drive shafts transferring power out to tilting wingtip rotor assemblies.

One of the major problems with the early tiltrotor
Tiltrotor
A tiltrotor is an aircraft which uses a pair or more of powered rotors mounted on rotating shafts or nacelles at the end of a fixed wing for lift and propulsion, and combines the vertical lift capability of a helicopter with the speed and range of a conventional fixed-wing aircraft...
aircraft designs was that the driveshafts carrying power from the fuselage out to the wingtip rotors, and the gearbox and tilting mechanisms at the wingtips, had substantial loads placed upon them and were heavy. They were transferring large amounts of power and torque long distances for an aircraft power transmission system.

The XV-15 experimental aircraft introduced a major design concept advance: Instead of engines in the fuselage, the XV-15 moved the engines out to the rotating wingtip pods, directly coupled to the rotors. The normal path for power was directly from the engine into a speed-reduction gearbox and into the rotor/propeller, without any long shafts involved. There was still a driveshaft along the wings for emergency use, to transfer power to the opposite rotor in case of engine failure. But that shaft did not normally carry any power loads, so it was lighter.

In the late 1960s and early 1970s, NASA
NASA
The National Aeronautics and Space Administration is the agency of the United States government that is responsible for the nation's civilian space program and for aeronautics and aerospace research...
and other researchers worked extensively on theoretical and wind tunnel tests of various rotor pods. Two companies were involved in the research and proposing designs: Bell Helicopter and Boeing-Vertol. The focus was on tilt rotor pods and integration of the tilting rotors with the wings and fuselage of the aircraft, and studying the airflow as the rotors tilted. Tilt rotors with fixed rotors and with folding rotors were investigated.

What was to become the XV-15 program was launched in 1971 at NASA Ames Research Center
NASA Ames Research Center
The Ames Research Center , is one of the United States of America's National Aeronautics and Space Administration 10 major field centers.The centre is located in Moffett Field in California's Silicon Valley, near the high-tech companies, entrepreneurial ventures, universities, and other...
. After preliminary work, a competition was held to award two $0.5 million research and development contracts for prototype designs. Companies that responded included Sikorsky Aircraft Corporation, Grumman Aircraft, Boeing-Vertol, and Bell Helicopter.

R&D contracts were issued to Bell Helicopter and Boeing-Vertol on 20 October 1972. The two companies' design proposals were delivered on 22 January 1973.

Boeing proposed a design, Model 222 (not to be confused with the later Bell 222
Bell 222
The Bell 222 is a twin-engined light helicopter built by Bell Helicopter. The Bell 230 is an improved development with different engines and other minor changes. A cosmetically modified version of the 222 was used as the titular aircraft in the US television series Airwolf.-Development:In the late...
conventional helicopter) in which the engines were in fixed pods at the end of each wing, and a small, rotating pod with the rotor was slightly closer to the fuselage on the wing. This design simplified the engine design by keeping it horizontal at all times, without having very long driveshafts to the tilting rotors.

The Bell design, Bell Model 301, in which the whole wingtip pod rotated between horizontal and vertical, with the engine and rotor assembly fixed together within the pod. This simplified the power transmission but had more complicated requirements for the engine design, and was probably slightly heavier than the Boeing proposal.

After a review of both proposals, NASA selected the Bell 301 for further development, and a contract for further R&D was issued on 31 July 1973. Extensive engineering and testing took the next four years to complete the development of the aircraft. The first of two Bell XV-15s, tail number N702NA, first flew on 3 May 1977. After minimal flight tests at the Bell test facility, the aircraft was moved to NASA Ames Research Center
NASA Ames Research Center
The Ames Research Center , is one of the United States of America's National Aeronautics and Space Administration 10 major field centers.The centre is located in Moffett Field in California's Silicon Valley, near the high-tech companies, entrepreneurial ventures, universities, and other...
in Mountain View, California where it was then mounted in the large Ames wind tunnel and tested extensively in various simulated flight environments.

Following wind tunnel and flight testing by Bell, the aircraft was then moved to NASA Dryden
Dryden Flight Research Center
The Dryden Flight Research Center , located inside Edwards Air Force Base, is an aeronautical research center operated by NASA. On March 26, 1976 it was named in honor of the late Hugh L. Dryden, a prominent aeronautical engineer who at the time of his death in 1965 was NASA's deputy administrator...
, which is at Edwards AFB in the California High Desert. The XV-15 flight testing continued expanding its flight envelope. It was able to successfully operate in both helicopter and normal aircraft flight modes and smoothly transition between the two. Once the aircraft was considered sufficiently tested, it was returned to Ames for further testing.

The XV-15s were sufficiently tested by 1981 that one of the aircraft was taken to that year's Paris Air Show
Paris Air Show
The Paris Air Show is the world's oldest and largest air show. Established in 1909, it is currently held every odd year at Le Bourget Airport in north Paris, France...
for demonstration flights.

The XV-15s were a standard demonstration in the annual summer airshow at the co-located Moffett Field Naval Air Station for a number of years in the 1980s. Both XV-15s were flown actively throughout the 1980s testing aerodynamics and tiltrotor applications for civilian and military aircraft types that might follow, including the V-22 program.

The first XV-15 prototype aircraft, N702NA, was transferred back to Bell for company development and demonstration use. On 20 August 1992, the aircraft crashed while being flown by a guest test pilot. He was lifting off for a final hover when a bolt slipped out of the collective control system on one pylon causing that rotor to go to full pitch. The aircraft rolled upside down out of control and crashed inverted. While significantly damaged, the aircraft was largely structurally intact and both the pilot and copilot escaped with only minor injuries from the crash. The cockpit of the aircraft was salvaged and converted for use as a flight simulator
Flight simulator
A flight simulator is a device that artificially re-creates aircraft flight and various aspects of the flight environment. This includes the equations that govern how aircraft fly, how they react to applications of their controls and other aircraft systems, and how they react to the external...
.

The shortest take-off distance was achieved with the nacelles at 75 degrees angle. 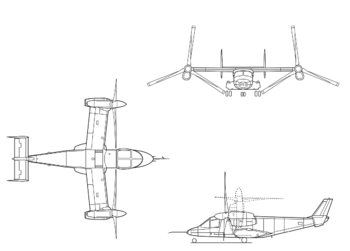