Encyclopedia
The Bell 222 is a twin-engined light helicopter
Helicopter
A helicopter is a type of rotorcraft in which lift and thrust are supplied by one or more engine-driven rotors. This allows the helicopter to take off and land vertically, to hover, and to fly forwards, backwards, and laterally...
built by Bell Helicopter. The Bell 230 is an improved development with different engines and other minor changes. A cosmetically modified version of the 222 was used as the titular aircraft in the US television series Airwolf
Airwolf
Airwolf is an American television series that ran from 1984 until 1987. The program centers on a high-tech military helicopter, code named Airwolf, and its crew as they undertake various missions, many involving espionage, with a Cold War theme....
.

The Bell 222 incorporated a number of advanced features including dual hydraulic and electrical systems, stub wings housing the retractable landing gear, and the Noda Matic vibration reduction system developed for the Bell 214ST.

Manufacturing began in 1975. The Model 222 first flew on August 13, 1976. It received certification from the Federal Aviation Administration
Federal Aviation Administration
The Federal Aviation Administration is the national aviation authority of the United States. An agency of the United States Department of Transportation, it has authority to regulate and oversee all aspects of civil aviation in the U.S...
(FAA) on August 16, 1979 and was approved for visual flight rules
Visual flight rules
Visual flight rules are a set of regulations which allow a pilot to operate an aircraft in weather conditions generally clear enough to allow the pilot to see where the aircraft is going. Specifically, the weather must be better than basic VFR weather minimums, as specified in the rules of the...
(VFR) use on December 20, 1979. Helicopter deliveries began on January 16, 1980. The FAA approved the 222 for single pilot instrument flight rules
Instrument flight rules
Instrument flight rules are one of two sets of regulations governing all aspects of civil aviation aircraft operations; the other are visual flight rules ....
(IFR) operation on May 15, 1980.

A development of the 222 is the Bell 230, with the 222's LTS 101 engines replaced by two Allison 250 turboshafts, plus other refinements. A converted 222 first flew as the prototype 230 on August 12, 1991. Transport Canada awarded certification in March 1992, and the first production 230 was delivered that November. The 230 had optional skid or wheel undercarriage. Production ended in 1995 with 38 having been built, being replaced in Bell's lineup by the stretched, more powerful Bell 430
Bell 430
-External links:*...
. 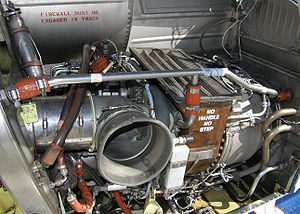 The design includes two main rotor blades of stainless-steel-fiberglass construction and rotor hub with elastomeric bearings, which are lubricant free. Its cabin holds a maximum of 10 persons with 1-2 pilots and 8-9 passengers. Seating configurations include standard seating for a pilot and seven passengers; or executive seating with 1-2 pilots and seating for 5-6. The Bell 222 and 230 are usually flown single-pilot (optional dual controls are available), and can be configured for corporate/executive, EMS or utility transport missions.
The Bell 222 is powered by twin Lycoming/Honeywell LTS101-650 turboshaft engines, rated at 592 shp each. Later 222 versions feature more powerful engines. Engine output is at 100% of rating at 9598 RPM. Two independent drive shafts deliver power from the engines to the transmission. The Bell 222's LST-engine exhaust stacks are located at the rear of the engines, while the 230's Allison-engine exhaust stacks are located high on the cowling. Fuel is stored in three tanks, one in the fuselage and one in each sponson
Sponson
Sponsons are projections from the sides of a watercraft, for protection, stability, or the mounting of equipment such as armaments or lifeboats, etc...
. The main rear landing gear retract into the sponsons.

The Bell 222's rotor systems include:

Bell 222 : The original Model 222, sometimes unofficially called a Bell 222A to distinguish it from the Bell 222B. It was powered by two (461 kW takeoff rated, 441 kW max continuous rated) Honeywell
Honeywell
Honeywell International, Inc. is a major conglomerate company that produces a variety of consumer products, engineering services, and aerospace systems for a wide variety of customers, from private consumers to major corporations and governments....
(formerly Lycoming) LTS-101-650C-3
Honeywell LTS101
|-See also:-External links:*...
turboshaft
Turboshaft
A turboshaft engine is a form of gas turbine which is optimized to produce free turbine shaft power, rather than jet thrust...
s.
Bell 222B : In 1982 the 222 was given a power upgrade (two Honeywell (formerly Lycoming) LTS-101-750Cs with takeoff rating of 505 kW each), a larger main rotor, and was renamed the Bell 222B.
Bell 222B Excutive : This model had improved systems and a luxury interior.

Bell 222UT : A 222B variant with skids, introduced in 1983. The lack of retractable landing gear allowed for larger auxiliary fuel tanks.

In addition to the large number of civil operators, a small number of Bell 222 family helicopters have entered military service.

The Bell 222 is widely known from the television series Airwolf
Airwolf
Airwolf is an American television series that ran from 1984 until 1987. The program centers on a high-tech military helicopter, code named Airwolf, and its crew as they undertake various missions, many involving espionage, with a Cold War theme....
where a modified 222A
Airwolf (helicopter)
Airwolf is the helicopter from the 1980s American television series of the same name. The aircraft itself was a modified Bell 222 twin-engined light helicopter built by Bell Helicopter and owned by JetCopters Inc.-Bell 222:...
was featured. Following this appearance, Bell 222s made a variety of background appearances in film, television, and computer games. A notable appearance was in the 2009 film Angels & Demons in which the Carmerlengo uses a Bell 222 to evacuate stolen anti-matter from the Vatican to save the city.