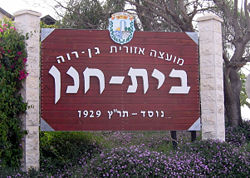 Beit Hanan is a moshav
Moshav
Moshav is a type of Israeli town or settlement, in particular a type of cooperative agricultural community of individual farms pioneered by the Labour Zionists during the second aliyah...
, south of Tel Aviv
Tel Aviv
Tel Aviv , officially Tel Aviv-Yafo , is the second most populous city in Israel, with a population of 404,400 on a land area of . The city is located on the Israeli Mediterranean coastline in west-central Israel. It is the largest and most populous city in the metropolitan area of Gush Dan, with...
, Israel
Israel
The State of Israel is a parliamentary republic located in the Middle East, along the eastern shore of the Mediterranean Sea...
, about two kilometers west of Ness Ziona
Ness Ziona
Ness Ziona is a city in central Israel founded in 1883. At the end of 2009 the city had a total population of 38,100, and its jurisdiction was 15,579 dunams.-Nahalat Reuben:...
. It belongs to the Moshavim Movement
Moshavim Movement
The Moshavim Movement is one of the main settlement movements in Israel, whose members are cooperative villages organized as moshavim and moshavim shitufiim...
and Gan Raveh Regional Council
Gan Raveh Regional Council
Gan Raveh Regional Council is a regional council in the Center District of Israel. The council's area of jurisdiction extends to eightsettlements: a kibbutz, six moshavim and a youth village. In 2006, the total population was 5,000...
. The population is approximately 500.

Founded during the Hanukkah
Hanukkah
Hanukkah , also known as the Festival of Lights, is an eight-day Jewish holiday commemorating the rededication of the Holy Temple in Jerusalem at the time of the Maccabean Revolt of the 2nd century BCE...
holiday of 1929 by Jewish immigrants
Aliyah
Aliyah is the immigration of Jews to the Land of Israel . It is a basic tenet of Zionist ideology. The opposite action, emigration from Israel, is referred to as yerida . The return to the Holy Land has been a Jewish aspiration since the Babylonian exile...
from Bulgaria
Bulgaria
Bulgaria , officially the Republic of Bulgaria , is a parliamentary democracy within a unitary constitutional republic in Southeast Europe. The country borders Romania to the north, Serbia and Macedonia to the west, Greece and Turkey to the south, as well as the Black Sea to the east...
, Beit Hanan was the first Jewish agricultural community to be established after the 1929 Palestine riots
1929 Palestine riots
The 1929 Palestine riots, also known as the Western Wall Uprising, the 1929 Massacres, , or the Buraq Uprising , refers to a series of demonstrations and riots in late August 1929 when a long-running dispute between Muslims and Jews over access to the Western Wall in Jerusalem escalated into violence...
. The name is taken from the Bible
Bible
The Bible refers to any one of the collections of the primary religious texts of Judaism and Christianity. There is no common version of the Bible, as the individual books , their contents and their order vary among denominations...
, specifically (1 Kings
Books of Kings
The Book of Kings presents a narrative history of ancient Israel and Judah from the death of David to the release of his successor Jehoiachin from imprisonment in Babylon, a period of some 400 years...
4:9).

In 2007, Beit Hanan had 750 acres (3 km²) of farmland. The main economic branches are eggs, orchards (pecan, citrus, avocado, mango, anona and olives) and greenhouses (flowers, vegetables and seedlings). The moshav also has banquet facilities on the grounds of a historic home.

A Greek
Greek language
Greek is an independent branch of the Indo-European family of languages. Native to the southern Balkans, it has the longest documented history of any Indo-European language, spanning 34 centuries of written records. Its writing system has been the Greek alphabet for the majority of its history;...
-inscribed mosaic floor was discovered within the boundaries of the moshav. A rare species of red iris grows west of the moshav, in a wild flower reserve stretching over 8 acres (32,374.9 m²).