Encyclopedia
Beiarn is a municipality
Municipalities of Norway
Norway is divided into 19 administrative regions, called counties , and 430 municipalities...
in Nordland
Nordland
is a county in Norway in the North Norway region, bordering Troms in the north, Nord-Trøndelag in the south, Norrbottens län in Sweden to the east, Västerbottens län to the southeast, and the Atlantic Ocean to the west. The county was formerly known as Nordlandene amt. The county administration is...
county
Counties of Norway
Norway is divided into 19 administrative regions, called counties . The counties form the primary first-level subdivisions of Norway and are further divided into 430 municipalities...
, Norway
Norway
Norway , officially the Kingdom of Norway, is a Nordic unitary constitutional monarchy whose territory comprises the western portion of the Scandinavian Peninsula, Jan Mayen, and the Arctic archipelago of Svalbard and Bouvet Island. Norway has a total area of and a population of about 4.9 million...
. It is part of the Salten
Salten
Salten is a district in Nordland in North Norway, consisting of the municipalities Meløy, Gildeskål, Bodø, Beiarn, Saltdal, Fauske, Sørfold, Steigen and Hamarøy. The district borders Helgeland in the south , Ofoten in the north, Sweden in the east and Vestfjorden in the west...
region
Districts of Norway
The country Norway is historically divided into a number of districts. Many districts have deep historical roots, and only partially coincide with today's administrative units of counties and municipalities. The districts are defined by geographical features, often valleys, mountain ranges, fjords,...
and the Bodø Region
Bodø Region
The Bodø Region is a metropolitan region in the county of Nordland in northern Norway, centered on the city of Bodø. Before January 1, 2005, there was also a separate municipality Skjerstad that was merged with Bodø.1/ km²2/ Population per km²...
. The administrative centre of the municipality is the village of Moldjord
Moldjord
-External links:* *...
. Beiarn was separated from Gildeskål
Gildeskål
Gildeskål is a municipality in Nordland county, Norway. It is part of the Salten traditional region. The administrative centre of the municipality is the village of Inndyr. Gildeskål was established as a municipality on 1 January 1838 . Beiarn was separated from Gildeskål in 1853...
in 1853. 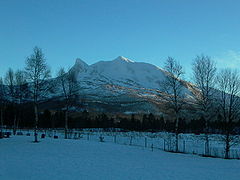 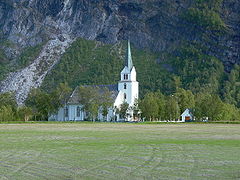 It is located just north of the Arctic Circle
Arctic Circle
The Arctic Circle is one of the five major circles of latitude that mark maps of the Earth. For Epoch 2011, it is the parallel of latitude that runs north of the Equator....
, on the Beiarelva river in Beiardalen (valley), and the area offers many outdoor activities to visitors, including fishing
Fishing
Fishing is the activity of trying to catch wild fish. Fish are normally caught in the wild. Techniques for catching fish include hand gathering, spearing, netting, angling and trapping....
, caving
Caving
Caving—also occasionally known as spelunking in the United States and potholing in the United Kingdom—is the recreational pastime of exploring wild cave systems...
and mountain walking
Mountaineering
Mountaineering or mountain climbing is the sport, hobby or profession of hiking, skiing, and climbing mountains. While mountaineering began as attempts to reach the highest point of unclimbed mountains it has branched into specialisations that address different aspects of the mountain and consists...
. The river is one of the best salmon rivers in North Norway. Beiarn farm museum includes an overview of Beiarn's cultural history, from the Viking
Viking
The term Viking is customarily used to refer to the Norse explorers, warriors, merchants, and pirates who raided, traded, explored and settled in wide areas of Europe, Asia and the North Atlantic islands from the late 8th to the mid-11th century.These Norsemen used their famed longships to...
age through to the middle of the last century.

The world's most northern
The world's most northern
This is a list of various northernmost things on earth.- Cities and settlements :See also: Northernmost settlements, Northernmost cities and towns-Geography:-Animals:-General:-Shrubs:-Trees:-Culture and music:-Sport :- Religion :...
naturally occurring elm
Elm
Elms are deciduous and semi-deciduous trees comprising the genus Ulmus in the plant family Ulmaceae. The dozens of species are found in temperate and tropical-montane regions of North America and Eurasia, ranging southward into Indonesia. Elms are components of many kinds of natural forests...
forest (Ulmus glabra) grows in Arstadlia nature reserve
Nature reserve
A nature reserve is a protected area of importance for wildlife, flora, fauna or features of geological or other special interest, which is reserved and managed for conservation and to provide special opportunities for study or research...
, where the rich vegetation also includes orchid
Orchidaceae
The Orchidaceae, commonly referred to as the orchid family, is a morphologically diverse and widespread family of monocots in the order Asparagales. Along with the Asteraceae, it is one of the two largest families of flowering plants, with between 21,950 and 26,049 currently accepted species,...
s. Beiarn is part of the Bodø Region
Bodø Region
The Bodø Region is a metropolitan region in the county of Nordland in northern Norway, centered on the city of Bodø. Before January 1, 2005, there was also a separate municipality Skjerstad that was merged with Bodø.1/ km²2/ Population per km²...
, a statistical metropolitan region. Beiarn is one of two Norwegian municipalities that do not have any non-western immigrants as of 1 January 2008.

The Old Norse
Old Norse
Old Norse is a North Germanic language that was spoken by inhabitants of Scandinavia and inhabitants of their overseas settlements during the Viking Age, until about 1300....
form of the name was (probably) Beðir. The meaning of the name is unknown. (Maybe related to the English
English language
English is a West Germanic language that arose in the Anglo-Saxon kingdoms of England and spread into what was to become south-east Scotland under the influence of the Anglian medieval kingdom of Northumbria...
word bed in the sense 'river bed'.)

The coat-of-arms
Coat of arms
A coat of arms is a unique heraldic design on a shield or escutcheon or on a surcoat or tabard used to cover and protect armour and to identify the wearer. Thus the term is often stated as "coat-armour", because it was anciently displayed on the front of a coat of cloth...
is from modern times. It was granted in 1988. The arms show a gold-colored pine
Pine
Pines are trees in the genus Pinus ,in the family Pinaceae. They make up the monotypic subfamily Pinoideae. There are about 115 species of pine, although different authorities accept between 105 and 125 species.-Etymology:...
tree on a green background.