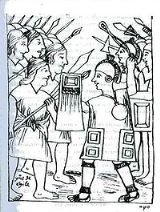 Encyclopedia
The Battle of the Maule was fought between the Mapuche
Mapuche
The Mapuche are a group of indigenous inhabitants of south-central Chile and southwestern Argentina. They constitute a wide-ranging ethnicity composed of various groups who shared a common social, religious and economic structure, as well as a common linguistic heritage. Their influence extended...
people and the Inca Empire
Inca Empire
The Inca Empire, or Inka Empire , was the largest empire in pre-Columbian America. The administrative, political and military center of the empire was located in Cusco in modern-day Peru. The Inca civilization arose from the highlands of Peru sometime in the early 13th century...
in what is now Chile
Chile
Chile ,officially the Republic of Chile , is a country in South America occupying a long, narrow coastal strip between the Andes mountains to the east and the Pacific Ocean to the west. It borders Peru to the north, Bolivia to the northeast, Argentina to the east, and the Drake Passage in the far...
. The three-day battle, which is generally believed to have occurred in the reign of Tupac Inca Yupanqui
Tupac Inca Yupanqui
Topa Inca Yupanqui , translated as "noble Inca accountant," was the tenth Sapa Inca of the Inca Empire, and fifth of the Hanan dynasty. His father was Pachacuti, and his son was Huayna Capac. Topa Inca belonged to the Qhapaq panaca....
(1471-93 CE), marked the end of the Incas' southward expansion.

The Incas crossed the Maule River, and keeping their old custom, they sent messengers to require these Purumaucas to submit to the rule of the Inca or resort to arms. The Purumaucas had determined to die before losing their freedom, and responded that the victors would be masters of the defeated and that the Incas would quickly see how the Purumaucas obeyed. Three or four days after this answer, the Purumaucas and their allies arrived and camped in front of the Incas' camp with 18,000 - 20,000 warriors. The Incas tried diplomacy, offering peace and friendship, claiming they were not going to take their land and property but to give them a way to live as men. The Purumaucas responded saying that they came not to waste time in vain words and reasoning, but to fight until they won or died. The Incas promised battle the next day.

The following day both armies left their camps and fought all day without either gaining an advantage, and both suffering many wounded and dead. At night they both retired to their positions. On the second and third day they fought with the same results. At the end of the third day of battle both factions saw that they had lost more than half their number in dead, and the living were almost all wounded. On the fourth day, neither side left their own camp, which had been fortified, as they hoped to defend them if their opponents attacked. The fifth and sixth days were passed in the same manner but by the seventh the Purumaucas and their allies retired and returned home claiming victory.