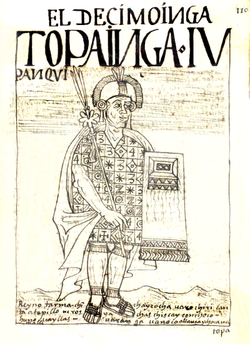 Topa Inca Yupanqui translated as "noble Inca accountant," was the tenth Sapa Inca (1471–93 CE) of the Inca Empire
Inca Empire
The Inca Empire, or Inka Empire , was the largest empire in pre-Columbian America. The administrative, political and military center of the empire was located in Cusco in modern-day Peru. The Inca civilization arose from the highlands of Peru sometime in the early 13th century...
, and fifth of the Hanan dynasty. His father was Pachacuti, and his son was Huayna Capac
Huayna Capac
Huayna Capac was the eleventh Sapa Inca of the Inca Empire and sixth of the Hanan dynasty. He was the successor to Tupac Inca Yupanqui.-Name:In Quechua, his name is spelled Wayna Qhapaq, and in Southern Quechua, it is Vaina Ghapakh...
. Topa Inca belonged to the Qhapaq panaca
PANACA
PANACA is a farming theme park that promotes contact between humans and nature, intended for those who live in the city and to create awareness about nature. The park was created in Colombia by a group of businessmen. There are three other parks under construction; one near Bogotá and two...
.

His father appointed him to head the Inca army in 1463. He extended the realm northward along the Andes through modern Ecuador
Ecuador
Ecuador , officially the Republic of Ecuador is a representative democratic republic in South America, bordered by Colombia on the north, Peru on the east and south, and by the Pacific Ocean to the west. It is one of only two countries in South America, along with Chile, that do not have a border...
, and developed a special fondness for the city of Quito
Quito
San Francisco de Quito, most often called Quito , is the capital city of Ecuador in northwestern South America. It is located in north-central Ecuador in the Guayllabamba river basin, on the eastern slopes of Pichincha, an active stratovolcano in the Andes mountains...
, which he rebuilt with architects from Cuzco. During this time his father Pachacuti reorganized the kingdom of Cuzco into the Tahuantinsuyu, the "four provinces".

He became Inca in his turn upon his father's death in 1471, ruling until his own death in 1493. He conquered Chimor
Chimor
Chimor was the political grouping of the Chimú culture that ruled the northern coast of Peru, beginning around 850 AD and ending around 1470 AD. Chimor was the largest kingdom in the Late Intermediate period, encompassing 1,000 km of coastline...
, which occupied the northern coast of what is now Peru
Peru
Peru , officially the Republic of Peru , is a country in western South America. It is bordered on the north by Ecuador and Colombia, on the east by Brazil, on the southeast by Bolivia, on the south by Chile, and on the west by the Pacific Ocean....
, the largest remaining rival to the Incas.

…there arrived at Tumbez some merchants who had come by sea from the west, navigating in balsas with sails. They gave information of the land whence they came, which consisted of some islands called Avachumbi and Ninachumbi, where there were many people and much gold. Tupac Inca was a man of lofty and ambitious ideas, and was not satisfied with the regions he had already conquered. So he determined to challenge a happy fortune, and see if it would favour him by sea. …

The Inca, having this certainty, determined to go there. He caused an immense number of balsas to be constructed, in which he embarked more than 20,000 chosen men. …

Tupac Inca navigated and sailed on until he discovered the islands of Avachumbi and Ninachumbi, and returned, bringing back with him black people, gold, a chair of brass, and a skin and jaw bone of a horse. These trophies were preserved in the fortress of Cuzco until the Spaniards came. The duration of this expedition undertaken by Tupac Inca was nine months, others say a year, and, as he was so long absent, every one believed he was dead.

Many historians are skeptical that the voyage ever took place. Supporters have usually identified the islands with the Galápagos Islands
Galápagos Islands
The Galápagos Islands are an archipelago of volcanic islands distributed around the equator in the Pacific Ocean, west of continental Ecuador, of which they are a part.The Galápagos Islands and its surrounding waters form an Ecuadorian province, a national park, and a...
. It has also been suggested that one of the islands was Easter Island
Easter Island
Easter Island is a Polynesian island in the southeastern Pacific Ocean, at the southeasternmost point of the Polynesian triangle. A special territory of Chile that was annexed in 1888, Easter Island is famous for its 887 extant monumental statues, called moai, created by the early Rapanui people...
, where oral traditions have been claimed that a group of long-eared hanau eepe came to the island from an unknown land.
The source of this article is wikipedia, the free encyclopedia.  The text of this article is licensed under the GFDL.