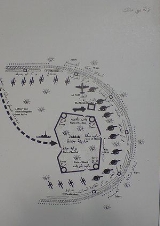 Encyclopedia
The Battle of Jeddah took place within today's Jeddah
Jeddah
Jeddah, Jiddah, Jidda, or Jedda is a city located on the coast of the Red Sea and is the major urban center of western Saudi Arabia. It is the largest city in Makkah Province, the largest sea port on the Red Sea, and the second largest city in Saudi Arabia after the capital city, Riyadh. The...
, Saudi Arabia
Saudi Arabia
The Kingdom of Saudi Arabia , commonly known in British English as Saudi Arabia and in Arabic as as-Sa‘ūdiyyah , is the largest state in Western Asia by land area, constituting the bulk of the Arabian Peninsula, and the second-largest in the Arab World...
and was mainly a siege of Jeddah, that ended on 17 December 1925 (1343 A.H.). Following the fall of Mecca
Mecca
Mecca is a city in the Hijaz and the capital of Makkah province in Saudi Arabia. The city is located inland from Jeddah in a narrow valley at a height of above sea level...
, in December 1924, to King Abdulaziz Ibn Saud
Ibn Saud of Saudi Arabia
King Abdul-Aziz of Saudi Arabia was the first monarch of the Third Saudi State known as Saudi Arabia. He was commonly referred to as Ibn Saud....
, King Ali bin Hussein
Ali of Hejaz
Ali bin Hussein, GBE was King of Hejaz and Grand Sharif of Mecca from October 1924 until December 1925. He was the eldest son of Sharif Hussein bin Ali, the first modern King of Hejaz, and a scion of the Hashemite family...
moved back to Jeddah trying to defend it against the Nejdi Army. Ali's remaining army started to build fortifications around the city and place mines. Ali requested help and supply from his brothers' states, King Abdullah
Abdullah I of Jordan
Abdullah I bin al-Hussein, King of Jordan [‘Abd Allāh ibn al-Husayn] عبد الله الأول بن الحسين born in Mecca, Second Saudi State, was the second of three sons of Sherif Hussein bin Ali, Sharif and Emir of Mecca and his first wife Abdiyya bint Abdullah...
of Transjordan
Transjordan
The Emirate of Transjordan was a former Ottoman territory in the Southern Levant that was part of the British Mandate of Palestine...
and King Faisal
Faisal I of Iraq
Faisal bin Hussein bin Ali al-Hashemi, was for a short time King of the Arab Kingdom of Syria or Greater Syria in 1920, and was King of the Kingdom of Iraq from 23 August 1921 to 1933...
of Iraq
Iraq
Iraq ; officially the Republic of Iraq is a country in Western Asia spanning most of the northwestern end of the Zagros mountain range, the eastern part of the Syrian Desert and the northern part of the Arabian Desert....
. They both supplied Ali with arms and men. Also, Ali's two old airplanes were not enough for the incoming battle. He bought five aircraft from Italy and several tank
Tank
A tank is a tracked, armoured fighting vehicle designed for front-line combat which combines operational mobility, tactical offensive, and defensive capabilities...
s from Germany.

Regardless, Ali could not stand for long. The nearby clans were Ibn Saud's allies. The supplies from Aqaba
Aqaba
Aqaba is a coastal city in the far south of Jordan, the capital of Aqaba Governorate at the head of the Gulf of Aqaba. Aqaba is strategically important to Jordan as it is the country's only seaport. Aqaba is best known today as a diving and beach resort, but industrial activity remains important...
traveled slowly to Jeddah, besides he had only two pilots, one of whom died during the battle.

The chiefs of Jeddah decided to surrender the city to Ibn Saud, while King Ali escaped to Baghdad over the Red Sea
Red Sea
The Red Sea is a seawater inlet of the Indian Ocean, lying between Africa and Asia. The connection to the ocean is in the south through the Bab el Mandeb strait and the Gulf of Aden. In the north, there is the Sinai Peninsula, the Gulf of Aqaba, and the Gulf of Suez...
. Consequently, Ibn Saud was declared the new King of Hejaz
Hejaz
al-Hejaz, also Hijaz is a region in the west of present-day Saudi Arabia. Defined primarily by its western border on the Red Sea, it extends from Haql on the Gulf of Aqaba to Jizan. Its main city is Jeddah, but it is probably better known for the Islamic holy cities of Mecca and Medina...
. The following year, Ibn Saud merged the Hejaz with the Nejd as one state.
The source of this article is wikipedia, the free encyclopedia.  The text of this article is licensed under the GFDL.