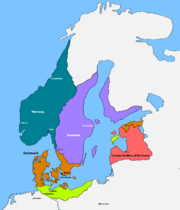 The Battle of Bornhöved took place on 22 July 1227 near Bornhöved
Bornhöved
Bornhöved is a municipality in the district of Segeberg, in Schleswig-Holstein, Germany. It is situated approx. 15 km east of Neumünster.Bornhöved is part of the Amt Bornhöved....
in Holstein
Holstein
Holstein is the region between the rivers Elbe and Eider. It is part of Schleswig-Holstein, the northernmost state of Germany....
. Count Adolf IV
Adolf IV of Holstein
Adolf IV , was a Count of Schauenburg and of Holstein , of the family of the Schauenburger. Adolf was the eldest son of Adolf III of Schauenburg and Holstein by his second wife, Adelheid of Querfurt....
of Schauenburg and Holstein
Counts of Schauenburg and Holstein
The Counts of Schauenburg and Holstein were titles of the Holy Roman Empire. The dynastic family came from Schauenburg near Rinteln on the Weser in Germany...
— leading an army consisting of troops from the cities of Lübeck and Hamburg
Hamburg
-History:The first historic name for the city was, according to Claudius Ptolemy's reports, Treva.But the city takes its modern name, Hamburg, from the first permanent building on the site, a castle whose construction was ordered by the Emperor Charlemagne in AD 808...
, about 1000 Dithmarsians
Dithmarschen
Dithmarschen is a district in Schleswig-Holstein, Germany. It is bounded by the districts of Nordfriesland, Schleswig-Flensburg, Rendsburg-Eckernförde, and Steinburg, by the state of Lower Saxony , and by the North Sea.-Geography:The district is located on the North Sea...
and combined troops of Holstein next to various north German nobles — defeated King Valdemar II of Denmark
Valdemar II of Denmark
Valdemar II , called Valdemar the Victorious or Valdemar the Conqueror , was the King of Denmark from 1202 until his death in 1241. The nickname Sejr is a later invention and was not used during the King's own lifetime...
.

Valdemar and his predecessor King Canute VI of Denmark
Canute VI of Denmark
Canute VI was King of Denmark . Canute VI was the eldest son of King Valdemar I and Sophia of Polotsk.-Life:...
had previously conquered Holstein, Mecklenburg
Mecklenburg
Mecklenburg is a historical region in northern Germany comprising the western and larger part of the federal-state Mecklenburg-Vorpommern...
, Hamburg, Lübeck
Lübeck
The Hanseatic City of Lübeck is the second-largest city in Schleswig-Holstein, in northern Germany, and one of the major ports of Germany. It was for several centuries the "capital" of the Hanseatic League and, because of its Brick Gothic architectural heritage, is listed by UNESCO as a World...
(1202), Ratzeburg
Ratzeburg
Ratzeburg is a town in Schleswig-Holstein, Germany. It is surrounded by four lakes—the resulting isthmuses between the lakes form the access lanes to the town. Ratzeburg is the capital of the Kreis of Lauenburg.-History:...
and the coast of Pomerania
Pomerania
Pomerania is a historical region on the south shore of the Baltic Sea. Divided between Germany and Poland, it stretches roughly from the Recknitz River near Stralsund in the West, via the Oder River delta near Szczecin, to the mouth of the Vistula River near Gdańsk in the East...
including the island of Rügen
Rügen
Rügen is Germany's largest island. Located in the Baltic Sea, it is part of the Vorpommern-Rügen district of Mecklenburg-Vorpommern.- Geography :Rügen is located off the north-eastern coast of Germany in the Baltic Sea...
.

The contest was maintained with great firmness on both sides, and continued for an unusual length of time, and the carnage was so great, that its combatants are said to have fought knee deep in blood. The King of Denmark had one of his eyes shot out, and had several horses killed under him, but his troops and their allies fought with so much bravery that the victory would have been theirs had not the contingent of Dithmar deserted their colors. At the most critical moment of the action these troops passed over to the enemy, and the Danes were obliged to give way. In the confusion that followed Otto I, Duke of Brunswick-Lüneburg
Otto I, Duke of Brunswick-Lüneburg
Otto I of Brunswick-Lüneburg was the first duke of Brunswick-Lüneburg from 1235 until his death. He is called Otto the Child to distinguish him from his uncle, Otto IV, Holy Roman Emperor.-Early years:...
and the Bishop of Ribe were taken prisoner. Otto was sent to Rostock
Rostock
Rostock -Early history:In the 11th century Polabian Slavs founded a settlement at the Warnow river called Roztoc ; the name Rostock is derived from that designation. The Danish king Valdemar I set the town aflame in 1161.Afterwards the place was settled by German traders...
, the capital of Schwerin
Schwerin
Schwerin is the capital and second-largest city of the northern German state of Mecklenburg-Vorpommern. The population, as of end of 2009, was 95,041.-History:...
, where he was shut up in a fortress. But the King of Denmark, who escaped from the field, busied himself in repairing this disaster by forming a fresh army, with which he kept the enemy in check.

As a result of the battle, the Danish border with the Holy Roman Empire
Holy Roman Empire
The Holy Roman Empire was a realm that existed from 962 to 1806 in Central Europe.It was ruled by the Holy Roman Emperor. Its character changed during the Middle Ages and the Early Modern period, when the power of the emperor gradually weakened in favour of the princes...
was moved north again from river Elbe
Elbe
The Elbe is one of the major rivers of Central Europe. It rises in the Krkonoše Mountains of the northwestern Czech Republic before traversing much of Bohemia , then Germany and flowing into the North Sea at Cuxhaven, 110 km northwest of Hamburg...
to the Eider River
Eider River
The Eider is the longest river of the German state of Schleswig-Holstein. The river starts near Bordesholm and reaches the southwestern outskirts of Kiel on the shores of the Baltic Sea, but flows to the west, ending in the North Sea...
, the southern border of the Duchy of Schleswig. This border remained in effect until 1806. The victorious Adolf IV of Schauenburg regained the County of Holstein and his fellow victor Albert I, Duke of Saxony
Albert I, Duke of Saxony
Albert I was a Duke of Saxony, Angria, and Westphalia; Lord of Nordalbingia; Count of Anhalt; and Prince-elector and Archmarshal of the Holy Roman Empire...
reasserted himself as liege lord
Liege Lord
Liege Lord was an American speed/power metal band, active in the 1980s and considered to be a pioneer of the genre. It was formed by Matt Vinci, Anthony Truglio and Frank Cortese....
of the Counts of Schauenburg and Holstein
Counts of Schauenburg and Holstein
The Counts of Schauenburg and Holstein were titles of the Holy Roman Empire. The dynastic family came from Schauenburg near Rinteln on the Weser in Germany...
. The Principality of Rügen was the only possession in the Holy Roman Empire left to Valdemar after the battle.
The source of this article is wikipedia, the free encyclopedia.  The text of this article is licensed under the GFDL.