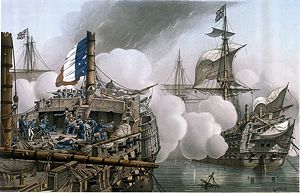 A battle ensign is the name given to a large war flag
War flag
A war flag is a variant of a national flag for use by the nation's military forces on land. The nautical equivalent is a naval ensign — the battle ensign...
which is flown on a warship
Warship
A warship is a ship that is built and primarily intended for combat. Warships are usually built in a completely different way from merchant ships. As well as being armed, warships are designed to withstand damage and are usually faster and more maneuvrable than merchant ships...
's mast just before going into battle.

The flag identified the allegiance of the ship in what could be a very confusing situation, with thick clouds of gunsmoke obscuring the ships in action, hence the large size of these ensigns typical for the Royal Navy
Royal Navy
The Royal Navy is the naval warfare service branch of the British Armed Forces. Founded in the 16th century, it is the oldest service branch and is known as the Senior Service...
from the 17th to 18th centuries of about 20 by 40 ft (6.1 by 12.2 m). It was commonly accepted that so long as a ship flew its ensign it was an active participant in battle; prior to action it was an acceptable ruse to fly a false flag
False flag
False flag operations are covert operations designed to deceive the public in such a way that the operations appear as though they are being carried out by other entities. The name is derived from the military concept of flying false colors; that is flying the flag of a country other than one's own...
.

If a ship surrendered then it would take down its ensigns (which was known as striking the colors
Striking the colors
Striking the colors is the universally recognized indication of surrender, particularly for ships at sea. Surrender is dated from the time the ensign is struck.-In international law:# "Colors. A national flag . The colors . ....
). This is also the origin of the phrase "To nail one's colours to the mast", showing a determination to fight on and never surrender. In practice, warships would fly more than one battle ensign, so that if the flag was destroyed or brought down during the fighting there would be no confusion. Conversely, keeping the flag flying even though the ship might appear to be past fighting was a sign of determination rather than foolishness. The German battleship Bismarck
German battleship Bismarck
Bismarck was the first of two s built for the German Kriegsmarine during World War II. Named after Chancellor Otto von Bismarck, the primary force behind the German unification in 1871, the ship was laid down at the Blohm & Voss shipyard in Hamburg in July 1936 and launched nearly three years later...
continued to fly its battle ensign even after its gun batteries had all been silenced by British shells, and it sank with the ensign still up.

The battle ensign was seen as an important element for the morale of the crew and was held in high regard. If a warship was sinking and had to be abandoned, flags such as the battle ensigns would be taken off the ship before it sank and were entrusted to the senior (surviving) officer.

Some countries use their national flag
National flag
A national flag is a flag that symbolizes a country. The flag is flown by the government, but usually can also be flown by citizens of the country.Both public and private buildings such as schools and courthouses may fly the national flag...
as the battle ensign, while others use their naval ensign. Sometimes unique flags were made and used as battle ensigns, for example the one flown by United States Naval Forces at the Battle of Lake Erie
Battle of Lake Erie
The Battle of Lake Erie, sometimes called the Battle of Put-in-Bay, was fought on 10 September 1813, in Lake Erie off the coast of Ohio during the War of 1812. Nine vessels of the United States Navy defeated and captured six vessels of Great Britain's Royal Navy...
in the War of 1812
War of 1812
The War of 1812 was a military conflict fought between the forces of the United States of America and those of the British Empire. The Americans declared war in 1812 for several reasons, including trade restrictions because of Britain's ongoing war with France, impressment of American merchant...
.

The battle ensign is sometimes also flown by U.S. Navy warships as a courtesy when entering or leaving foreign ports.

An ensign from the French Généreux
French ship Généreux (1785)
The Généreux was a French Téméraire class ship of the line.She was launched in 1785 at Rochefort. With the Guillaume Tell, she was one of only two ships to escape the British attack at the Battle of the Nile in August 1798....
of 8.2 by 16 m (26.9 by 52.5 ft) was captured by HMS Foudroyant
HMS Foudroyant (1798)
HMS Foudroyant was an 80-gun third rate of the Royal Navy. She was built at Plymouth Dockyard and launched on 31 March 1798.Goodwin gives the launch date for Foudroyant as 31 March, 25 May, and 31 August. The text highlights this discrepancy and attributes the August date to Lyon's Sailing Navy...
in 1800, and presented by its captain, one time Flag Captain
Flag captain
In the Royal Navy, a flag captain was the captain of an admiral's flagship. During the 18th and 19th centuries, this ship might also have a "captain of the fleet", who would be ranked between the admiral and the "flag captain" as the ship's "First Captain", with the "flag captain" as the ship's...
of Lord Nelson, to the City of Norwich
Norwich
Norwich is a city in England. It is the regional administrative centre and county town of Norfolk. During the 11th century, Norwich was the largest city in England after London, and one of the most important places in the kingdom...
.

In the early days of World War II
World War II
World War II, or the Second World War , was a global conflict lasting from 1939 to 1945, involving most of the world's nations—including all of the great powers—eventually forming two opposing military alliances: the Allies and the Axis...
Captain F. S. Bell
F. S. Bell
Captain Frederick Secker Bell CB of the Royal Navy was the commander of during the Battle of the River Plate in December 1939.He was educated at Matfield Grange, Kent and the Royal Naval Colleges at Osborne and Dartmouth...
of HMS Exeter
HMS Exeter (68)
HMS Exeter was a York class heavy cruiser of the Royal Navy that served in World War II. She was laid down on 1 August 1928 at the Devonport Dockyard, Plymouth, Devon. She was launched on 18 July 1929 and completed on 27 July 1931...
gave the order to hoist battle ensigns as Exeter turned to engage German "pocket battleship" Admiral Graf Spee, which significantly outgunned her, during the Battle of the River Plate
Battle of the River Plate
The Battle of the River Plate was the first naval battle in the Second World War. The German pocket battleship had been commerce raiding since the start of the war in September 1939...
.